10 spots to visit in Edmonton during your summer staycation 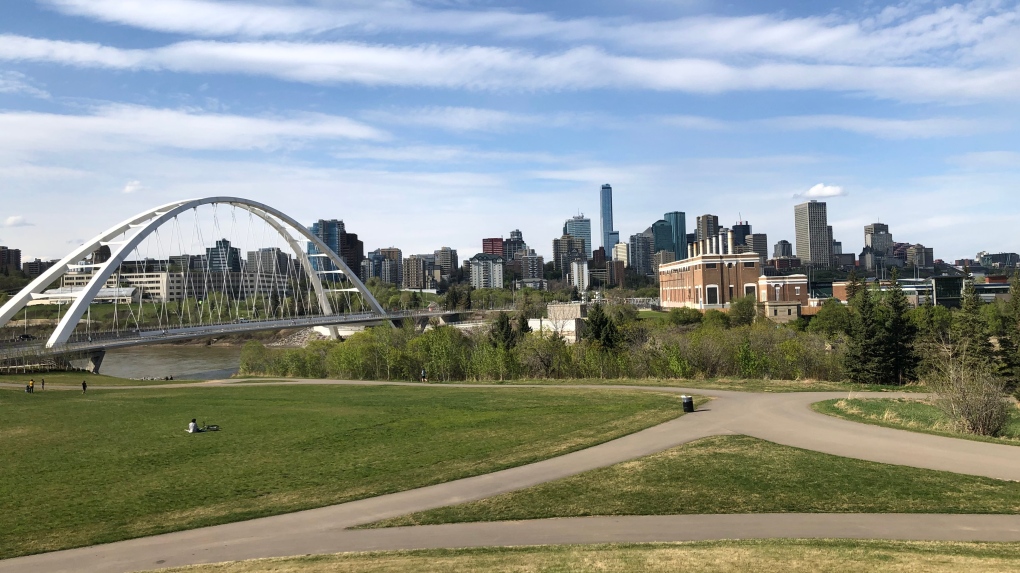 EDMONTON -- With non-essential travel not recommended during the pandemic, Edmontonians are looking within their city and province to enjoy the beautiful summer months.

Locals wanting to get to know or rediscover their city have plenty of options in and around the river valley and downtown for the whole family.

"It’s one thing to be able to showcase our amazing city to visitors and guests, and it is even more special when we get to rediscover our own backyard again," said Explore Edmonton Director of Communications Tammy Forbes. "And even if we have to adapt to the current health restrictions and remain safe, the tourism industry is going to be vital as Edmontonians look for fun ways to rediscover their own city. Our greatest ambassadors are the people who choose to make this place their home."

Here are 10 unique spots to check out during your summer staycation. 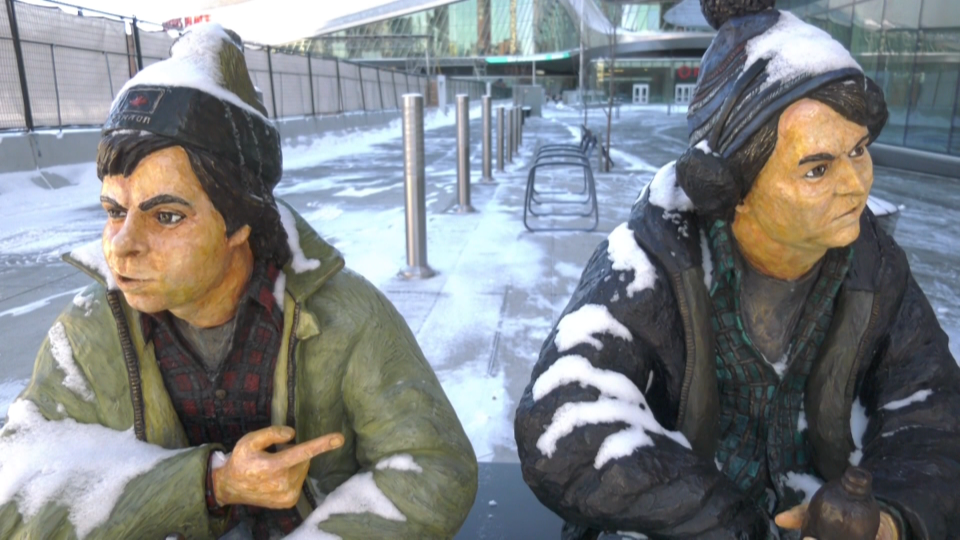 From your television screen to a bench in Ice District, Bob and Doug McKenzie are now in Edmonton for good.

The sculpture of Rick Moranis and Dave Thomas pays tribute to the sketch comedy duo's Great White North segment that had a memorable run on Second City Television in the 70s and 80s.

Edmonton sculptor Ritchie Velthuis made the piece that appeared in Ice District, in 103 Street and 103 Avenue, in late March. 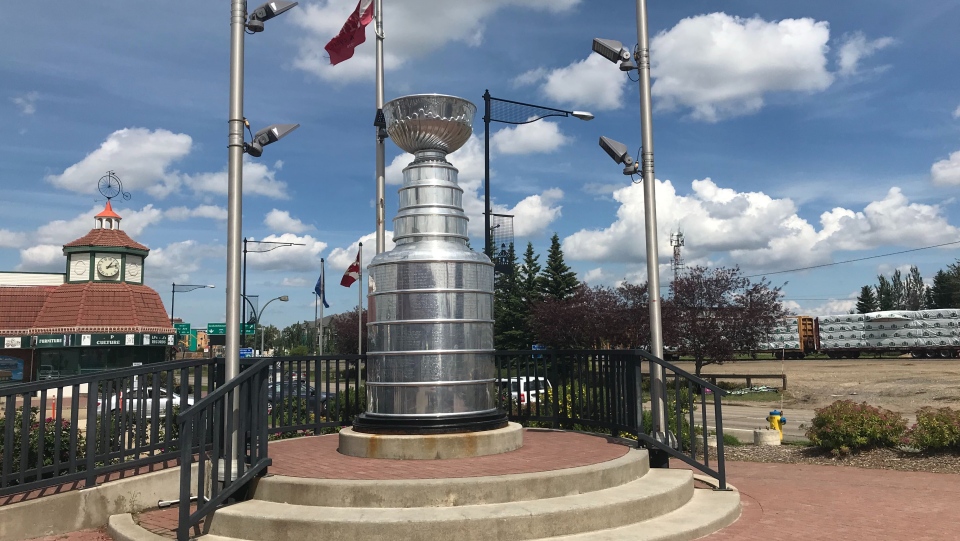 Edmonton has had a lot of Stanley Cups over the year, and while this one wasn't won on the ice, it's by far the biggest and most prominent.

Located in front of the United Cycle on Gateway Boulevard, the Spirit of Stanley is the world's largest Stanley Cup replica at four metres and 850 pounds.

Fun fact: Each team took 45 minutes to engrave, according to its maker, IMARK. 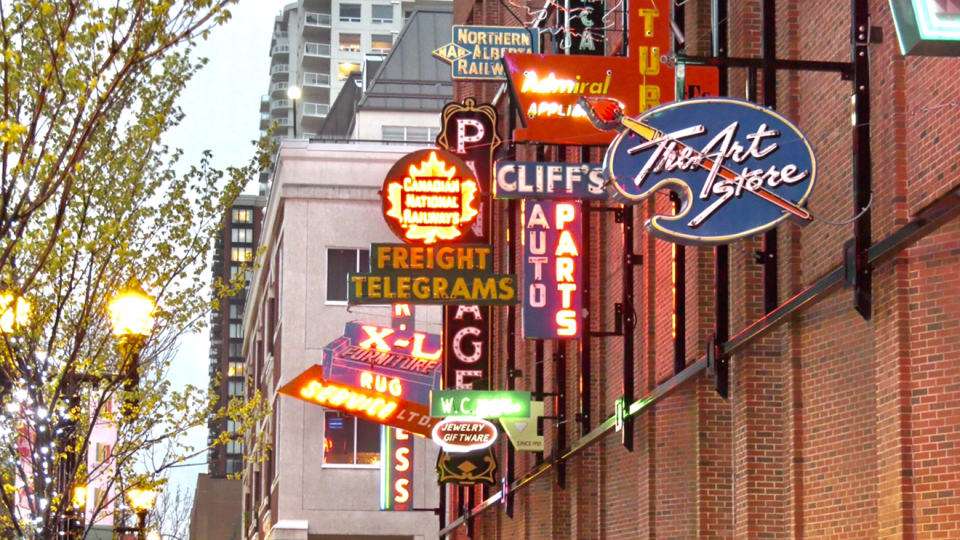 An Edmonton classic, the Neon Sign Museum tells parts of the city's history in an artistic and bright way.

The City of Edmonton has collected 20 signs, restored and installed them on the Telus building and Mercer Warehouse on 104 Street.

Neon signs include the Canadian National Railway, the Princess Theatre, and with the goal of collecting 30 signs, there is a petition to save and move the Western Cycle sign there. 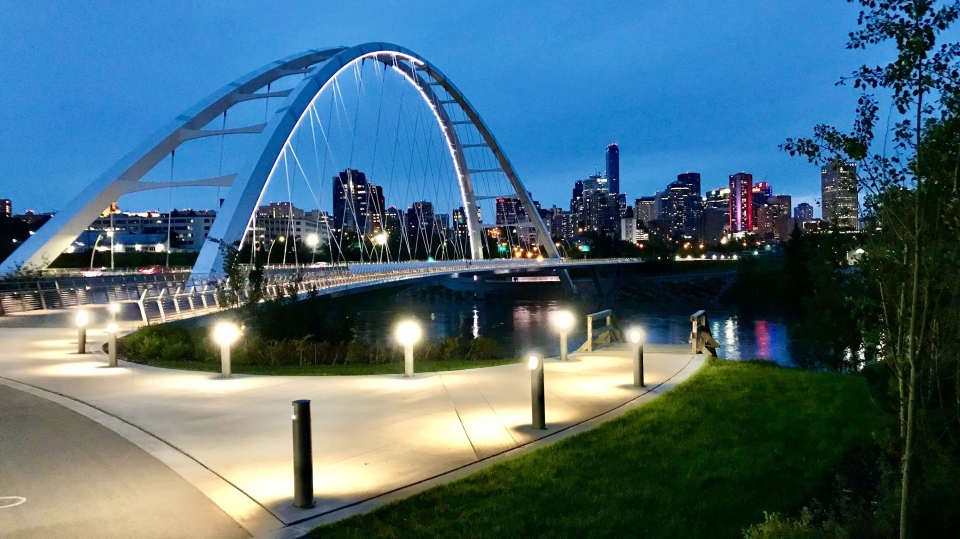 These two are just nice to look at, especially at night. The City of Edmonton often changes the High Level Bridge's lights in the morning and night to celebrate certain occasions, or to send a message of solidarity as it did recently with Nova Scotia.

The Walterdale Bridge has only been around for three years but it's already arguably Edmonton's No. 1 spot for photos, featuring the breathtaking architecture, the river valley, and downtown Edmonton's growing skyline. 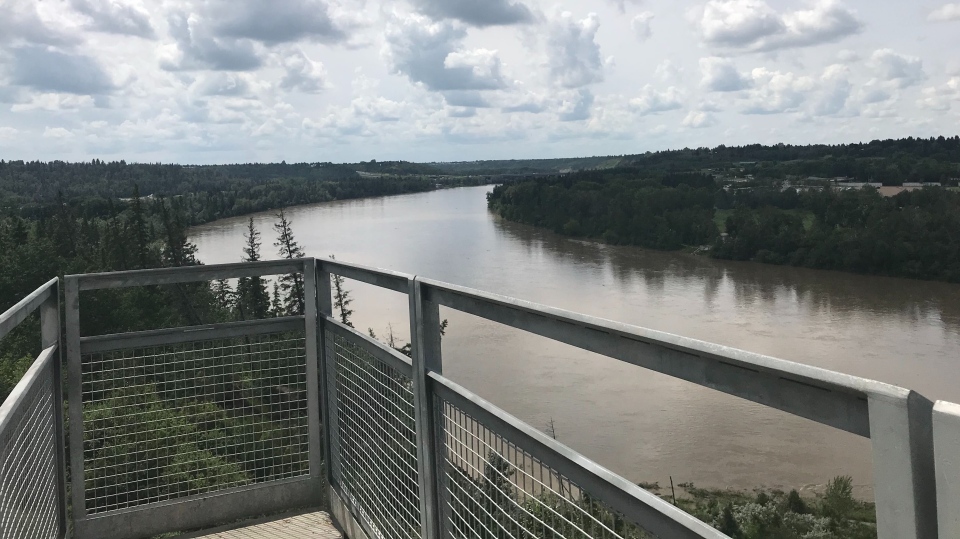 Keillor Point was known as the End of the World before the City of Edmonton overhauled the North Saskatchewan River viewpoint in 2019.

The End of the World, located in the Belgravia neighbourhood, had become a safety hazard due to slumping in the embankment and deterioration of the pillars, the city said.

Still, it was a popular place to hang out and take pictures of the river, so the city spent $1.5 million to make it safer and more accessible, with stairs and a pathway. 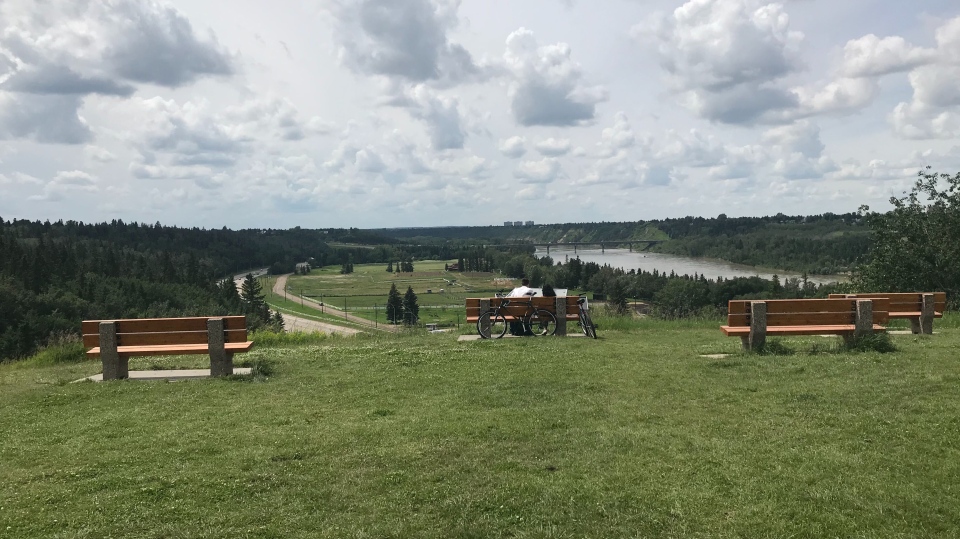 Near Keillor Point, these benches in the Belgravia Dog Park are a cool spot to catch a sunset with views that include Fox Drive, the Whitemud Equine Learning Centre Association, Quesnell Bridge, the river — and your dog. 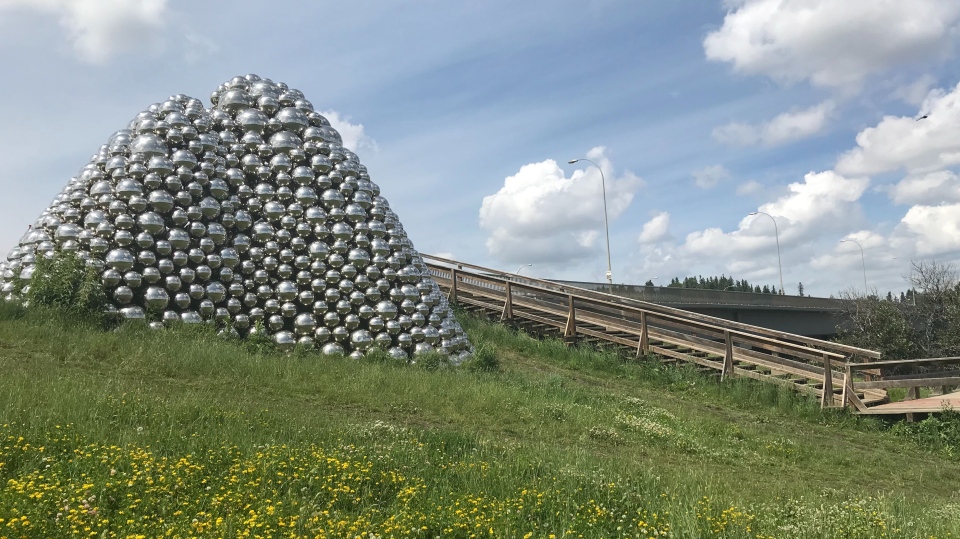 You've probably driven by the 1,000 steel balls while crossing the Quesnell Bridge and raised an eyebrow, but the city encourages Edmontonians to take a closer look.

"Think fun house meets the compound eye of a fly," Explore Edmonton said. "You can capture some pretty warped and funny reflections that will have you busting a gut laughing."

Just don’t throw paint on it. 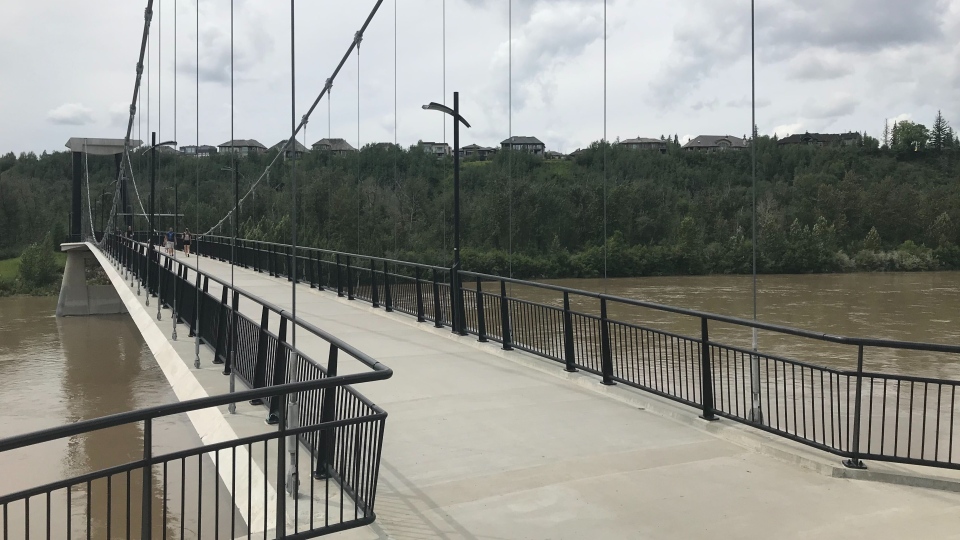 A footbridge on what feels like the middle of nowhere connects neighbourhoods in southwest Edmonton divided by the North Saskatchewan River.

Sit on the benches on and surrounding the bridge for up-close views of the river, or exercise on the trails on either side or the Wolf Willow Stairs just steps away.

"If you choose the latter, be prepared to sweat it out and hike up 200 stairs to get to this vantage point," Explore Edmonton said. 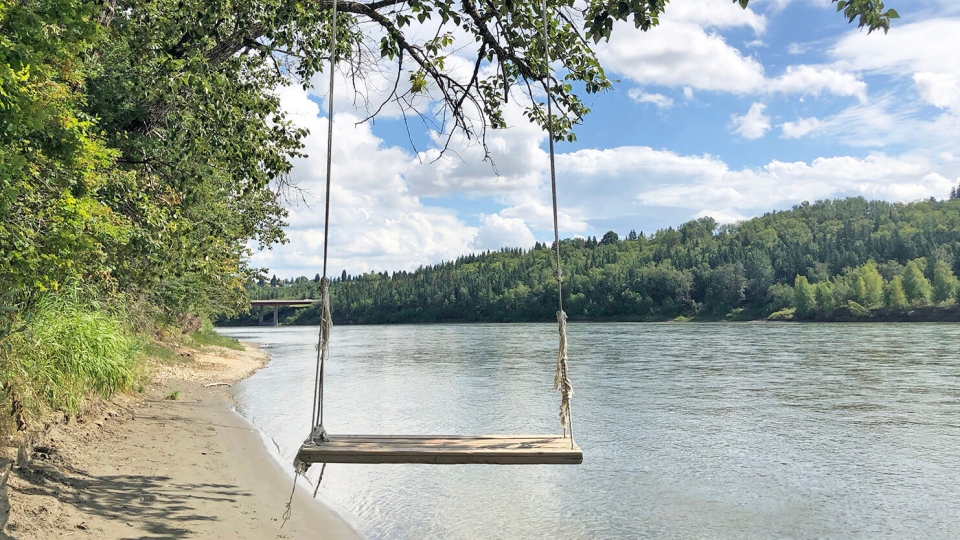 As if it wasn't clear Edmonton's river valley was full of fun and surprises: a wooden swing overlooking downtown Edmonton.

It's been called a hidden gem and picturesque, but not many people know where it is. It's not clear who built it and put it there — the mystery adding to the charm.

It's tucked under somewhere around Dawson Park.

Tell your friends…unless you want it all to yourself. 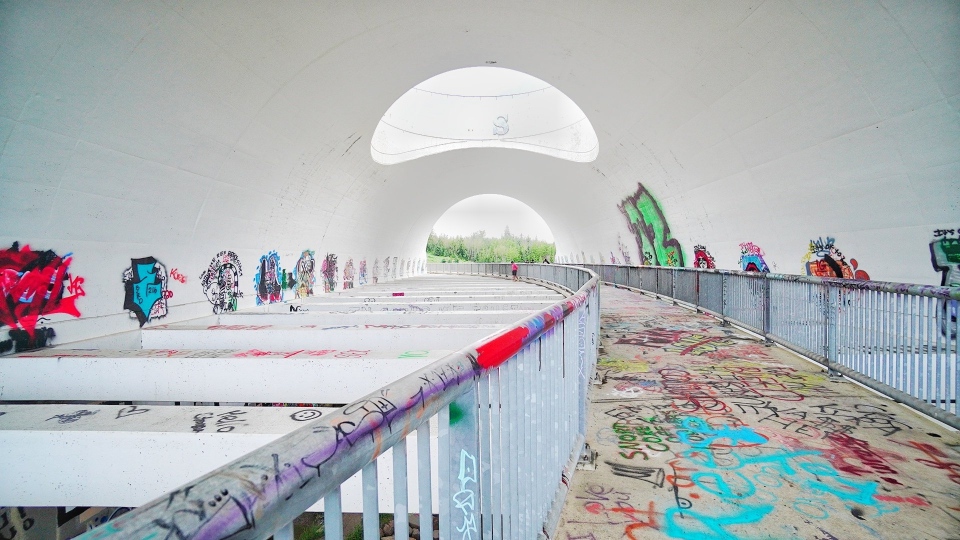 This is another gem not a lot of people have known about until now.

Underneath the Whitemud Creek on Anthony Henday Drive is an archway that wraps around a footbridge.

And since it doesn’t get a lot of foot traffic, it's turned into a lot more than that.

The little underpass has turned into a colourful retreat covered in graffiti and photographers admiring the rugged beauty.

It may looked abandoned on the outside, but it's getting a lot of attention on social media.