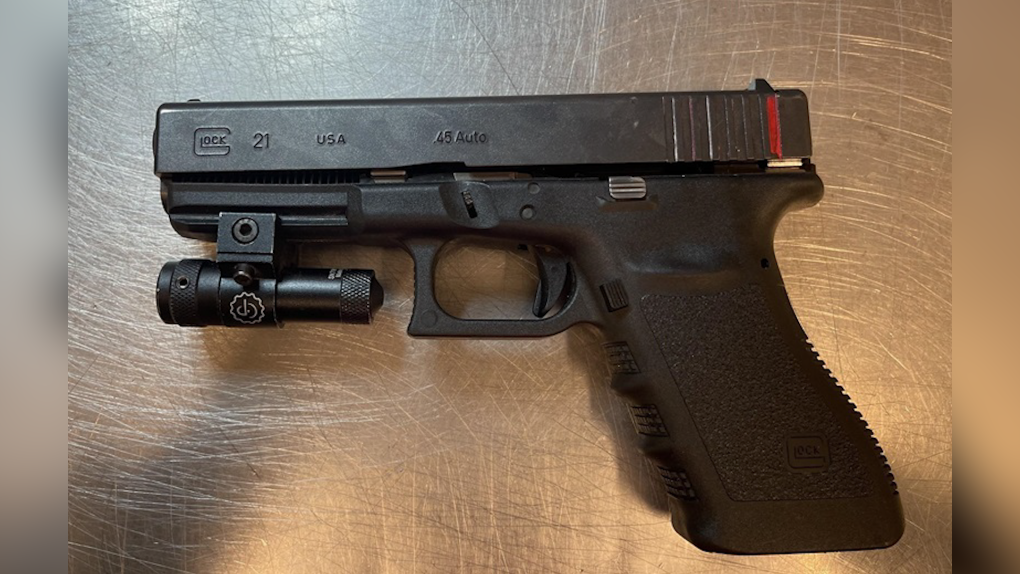 A handgun seized by police in February 2021. (Source: EPS)
EDMONTON -

Two men have been charged with multiple firearms-related offences in connection to a straw-buying operation dating back to 2019.

Straw buying is where one person buys a good or service for someone else who can’t or doesn’t want to themselves.

In February of 2021, Edmonton police were called to a weapons complaint in the area of 125 Street and 132 Avenue. Officers arrested Caleb Lauer, 25, who they say was in possession of a handgun with a defaced serial number.

Lauer was charged with nine offences, including possession of a loaded restricted firearm.

During the investigation, the EPS Firearms Investigation Unit discovered the firearm was used in a shooting in the Castledowns area on Dec. 6, 2020. No injuries were reported in that incident.

On Aug. 25, 2021, Brett Shepherd, the registered owner of the handgun, was arrested, police said. He had a valid firearms license and three other restricted firearms were registered at his residence. Police said the guns were missing when officers searched his home.

“The investigation revealed that Shepherd allegedly purchased the four handguns over a two-month period, with the intention of trafficking those firearms as a straw purchaser,” said EPS in a news release.

“The firearms were allegedly trafficked to Lauer over a period of time between December 2019 and January 2020.”

Shepherd has been charged with nine offences, including firearms trafficking, possession for the purpose of trafficking, and unauthorized possession.

On Sept. 9, 2021, Lauer was arrested again in relation to numerous offenses, including the December 2020 shooting.

He has been charged with 11 offences, including discharging a firearm with the intent to endanger life, firearms trafficking, and possession for the purpose of trafficking.

Authorities are investigating after confirming that a prop firearm discharged by actor Alec Baldwin, while producing and starring in a Western movie, killed the cinematographer and wounded the director.

Canadian Blood Services is working to update rules about who can donate and plans to submit a request to Health Canada later this year to abandon time-based requirements for gay and bisexual men.

The search resumes for unmarked graves, Canada quietly updates travel advisories, and new pandemic benefits are on the way. Here's what you need to know to start your day.