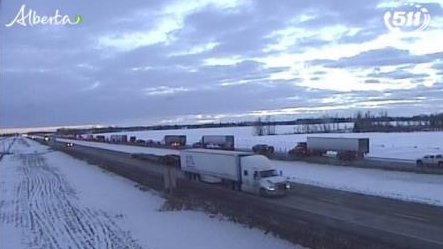 Two people were injured Wednesday afternoon when a semi and a car collided on Highway 2 south of Edmonton.

STARS Air Ambulance was called to the scene near Highway 611 around 1 p.m. and transported one patient to hospital, RCMP said.

Another person from the car was taken to hospital in an ambulance.

RCMP did not provide details on the conditions of the victims, and didn't mention any other injuries.

Southbound traffic on Highway 2 was diverted for several hours and the area was still closed to traffic at 5 p.m., according to 511 and its nearby traffic camera.

Police said a traffic analyst was on scene investigating but, "road conditions are believed (to be) a contributing factor."

U.S. Secretary of State Antony Blinken accused Russia on Thursday of weaponizing food and holding grain for millions of people around the world hostage to help accomplish what its invasion of Ukraine has not -- 'to break the spirit of the Ukrainian people.'

The man accused of attacking comedian Dave Chappelle during a performance in Los Angeles earlier this month is now facing attempted murder charges -- for an entirely different incident.