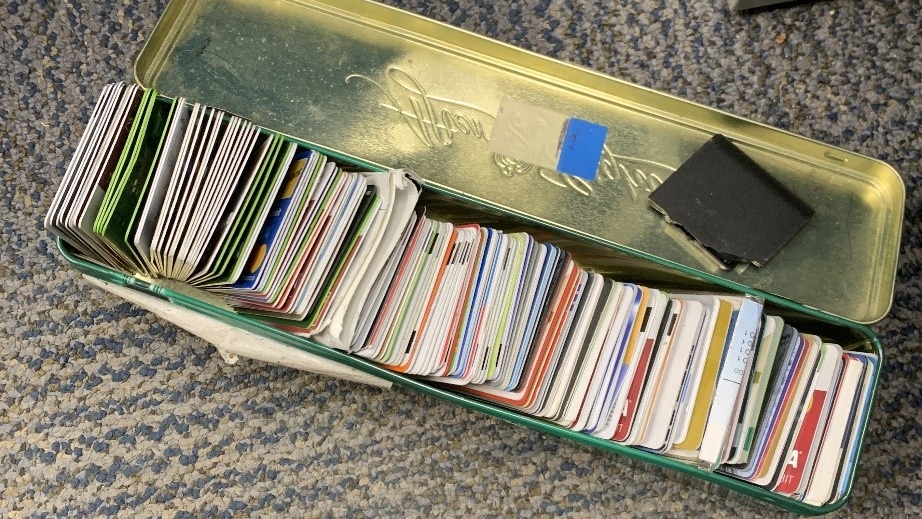 Edmonton police found 111 identity documents belonging to 89 victims, 85 stolen bank cards belonging to 57 victims, 108 other cards belonging to 38 victims, stolen mail belonging to about 200 people, and several mailbox and parcel box keys during a warranted search of a home near 202 Street and 57 Avenue. Two were arrested and charged with offences related to drug trafficking and forged documents. (Photo provided.)
EDMONTON -

Identity and personal documents belonging to hundreds of victims were found in an Edmonton home at the centre of a drug-trafficking investigation.

A pair connected to the home – 32-year-old Raymond Credgeur and 41-year-old Jamie Johnman – face more than 60 charges together.

The investigation started with a tip about the home near 202 Street and 57 Avenue in early 2021.

In April, the pair were taken into custody and officers searched the home. They found methamphetamine, a conducted energy weapon, stolen identity documents, bank cards, and evidence of what police called a "sophisticated identity theft operation."

According to EPS, there was also evidence of the pair using the victims' identities to open bank accounts and cell phone contracts.

“This investigation highlights the significance of keeping a close eye on your mail and the importance of contacting your financial institution when your credit card doesn’t arrive when you’re expecting it,” said Const. Cabantan with EPS' Special Projects Team.

Canada Post and the Safer Communities and Neighbourhoods (SCAN) Unit assisted in the case.

Nicknamed the 'Molten Ring,' this deep-space phenomenon is 9.4 billion light-years away

In 2020, the Hubble Space Telescope captured a rare and spectacular image of light from a far-away galaxy curving in a glowing arc around a cluster of dense gravity -- and now, new analysis has revealed that this light travelled 9.4 billion light-years to reach us.