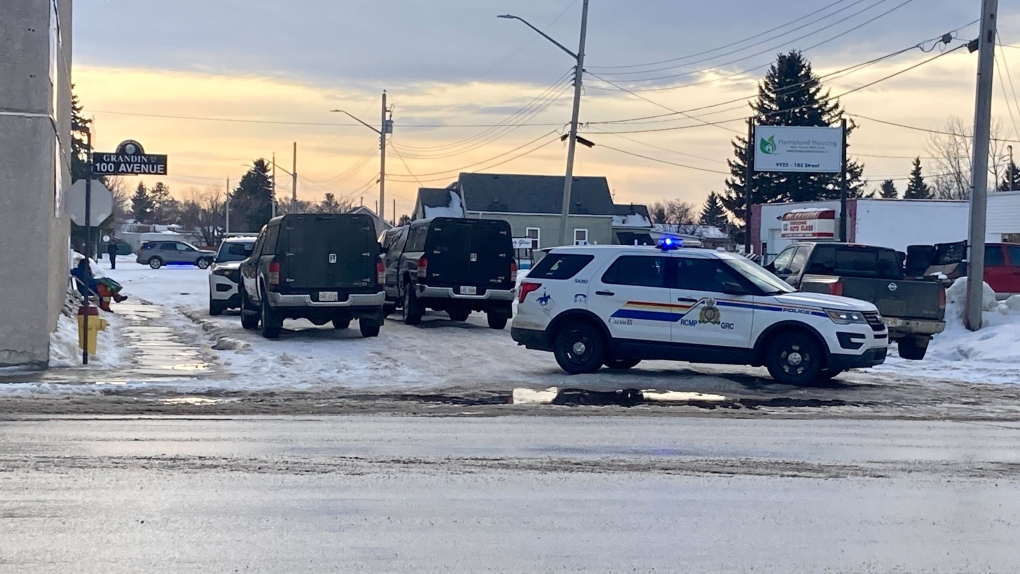 The RCMP are investigating an incident in Morinville on Saturday, Jan. 22, 2022. (Dave Mitchell/CTV News Edmonton)

Two people face multiple charges in connection to a Saturday armed robbery of a business in Morinville, Alta.

A heavy police presence in the area of 103 Street and 100 Avenue was explained by Mounties on Sunday.

According to police, officers were dispatched to the area around 7:20 a.m. after reports of a robbery with a weapon.

Witnesses told RCMP that a man and a woman entered the business when the man pointed a firearm at an employee and stole an undisclosed amount of cash and merchandise. The pair then fled on foot.

"During the rapidly unfolding investigation, police determined that the suspects entered a room at a hotel in Morinville," RCMP said in a statement, adding that officers from Morinville, Redwater, and St. Albert responded alongside Alberta Sheriffs.

A search of the hotel room found the stolen property, firearm used, and clothing worn by the suspects, Mounties added. Three people were initially taken into custody, but one was later released.

Kendall Dustin Paul, 28, of Alexander First Nation, Alta., has been charged with robbery with a firearm, pointing a firearm, possessing a weapon for a dangerous purpose, unauthorized possession of a weapon, and wearing a disguise with intent to commit an offence.

Ramona Stephanie LaFleche, 50, of Morvinville, faces two charges, including robbery with a firearm and possession of stolen property.

Both have been released from custody and are to appear in Morinville provincial court on Feb. 10, 2022.

The town of Morinville is about 34 kilometres north of Edmonton along Highway 2.

The decision by police to wait before confronting the gunman at Robb Elementary School in Uvalde was a failure with catastrophic consequences, experts say. When it was all over 19 students and two teachers were dead.

Indigenous B.C. filmmaker says he was refused entry on Cannes red carpet for his moccasins

A Dene filmmaker based in Vancouver says he was "disappointed" and "close to tears" when security at the Cannes Film Festival blocked him from walking the red carpet while dressed in a pair of moccasins.

Justice Minister David Lametti is defending the federal government's authority to challenge provincial laws that they believe infringe on the rights of Canadians, after Quebec said Ottawa's reaction to Bills 21 and 96 lacked 'respect.'

As Russia asserted progress in its goal of seizing the entirety of contested eastern Ukraine, President Vladimir Putin tried Saturday to shake European resolve to punish his country with sanctions and to keep supplying weapons that have supported Ukraine's defence.

Around a hundred people gathered at noon Saturday at the empty Vancouver home where Chelsea Poorman’s remains were found late last month to show their support for her family's call for answers and justice.

Canada and Finland won semifinal games Saturday to set up a third straight gold-medal showdown between the teams at the IIHF world hockey championship.

Riot police fired tear gas and pepper spray at Liverpool supporters forced to endure lengthy waits to get into the Champions League final amid logistical chaos and an attempt by UEFA and French authorities to blame overcrowding at turnstiles on people trying to access the stadium with fake tickets on Saturday.

48K without power one week after deadly storm swept through Ontario, Quebec

One week after a severe wind and thunderstorm swept through Ontario and Quebec, just over 48,000 homes in the two provinces were still without power on Saturday.

Explainer: Where do hydro poles come from?

The devastating storm in southern Ontario and Quebec last weekend damaged thousands of hydro poles across the two provinces. CTVNews.ca gives a rundown of where utility companies get their hydro poles from, as well as the climate challenges in the grid infrastructure.