'A chance to give back': Local songbirds serenade seniors

EDMONTON -- Residents of GEF Seniors Housing - Montgomery Place were treated to some live music in their courtyard Wednesday afternoon.

"Just hoping that they get a little bit of joy," Gates told CTV News Edmonton.

"A few minutes of you know, hearing some music and just some stimulation. Just a chance to see something different other than the four walls that you‘re surrounded by," he said.

Residents took in the show from a safe distance in the courtyard as well as from their open apartment windows. 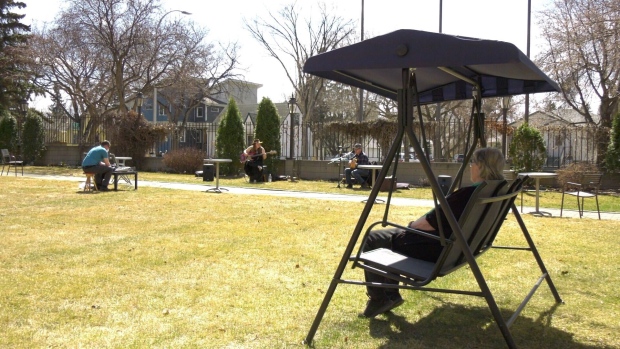 With Gates on guitar and vocals, the duo’s song list included tunes from the likes of Simon & Garfunkel, Bob Marley and The Beatles.

The pair played three sets to give all of the residents a chance to rotate through to the courtyard side of the building.

The gig came together with the help of the Strathearn Community League, which accommodated both sound and logistics for the show.

"What I get out of it is a chance to give back," said Gates.

"I’m very appreciative of the support I’ve gotten from the Edmonton Community, from the local Community League and on top of that even just CERB, which I’m ever so grateful for."

Plans are already in the works for encore performances. The hope is the upcoming seniors home shows will be presented on a larger scale.