EDMONTON -- When Ruby Swanson travelled to Ukraine to launch a translated version of her book, she wanted to bring hope to the LGBTQ people she had met there.

The challenges she saw were even more upsetting than she had prepared for.

"I'm standing there thinking, am I insane? What am I doing here?" Swanson remembered.

A Family Outing is a memoir about her son's coming out and Swanson's journey to becoming an LGBTQ advocate.

A day after her book launch, she planned to attend Kyiv Pride. She was expecting a celebration.

"There was no loud music playing, there were no people standing and watching. There were military police flanking us on either side," Swanson told CTV Morning Live Edmonton. "There were 8,300 people from around Ukraine and around the world that were participating in a civil rights march."

The crowds included 5,000 police and security people in riot gear and 1,000 neo Nazis. The parade participants were warned not to wear anything with rainbows and marched in lines of eight people across.

"It was, I have to say, kind of terrifying, a little unnerving," she said. 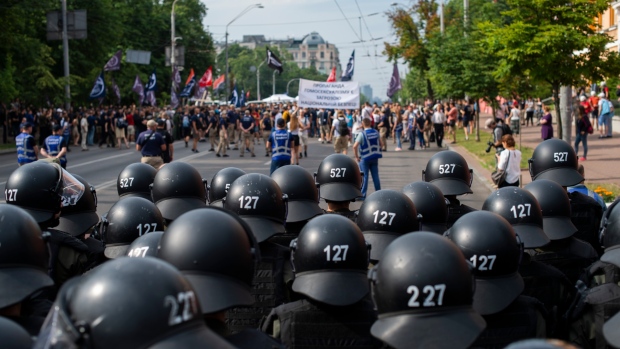 Swanson had her book translated after a trip to Ukraine in 2016 to see where her family came from. She described the people she met at the pride centre and in the community as defeated and demoralized. She felt that they needed the hope that her story could share.

Swanson is launching the translated version of her book at an event in Edmonton on Nov. 3.