'A lot of racism': Percentage of Indigenous inmates in Edmonton hitting new highs

It's not a new trend but the overrepresentation of Indigenous people in Edmonton's prisons is much higher than the Canadian average and continuing to grow at a faster rate, as advocates search for solutions.

CTV News Edmonton obtained statistics from Canada's Office of the Correctional Investigator going back more than a decade.

They show that more than 65 per cent of inmates at the Edmonton Institution for Women this month are Indigenous, up from 56 per cent in 2010.

Nearly 60 per cent of the men incarcerated at Edmonton Institution identify the same, up from 42 per cent in 2010.

About 6.5 per cent of people in Alberta identified as Aboriginal in a 2016 Stats Canada report.

"I don't want to say it's racism, I wish it wasn't, but there's a lot of racism involved in the policing and then secondarily, just the judicial system and the way it's set up," criminal defence lawyer Jill Shiskin explained to CTV News Edmonton.

"The Indigenous people that I end up working with have had really tough lives."

Shishkin believes Indigenous people are over-policed as suspects and under-policed when they're victims.

"It becomes a self-fulfilling prophecy when now that group is charged more often, they're convicted more often," she said.

Also part of the problem, according to a legal navigator who works with Indigenous people, is that the justice system often perpetuates a cycle of imprisonment which usually starts small and then snowballs.

"The courts have not been able to address, were not designed to address, issues of addiction, housing and poverty," said Stephen Shirt with Legal Aid Alberta.

"If we don't address those issues when it is at that stage, where it's just a small drug offence and it's only a couple days, that sentence will grow larger and larger once they start reoffending without those proper supports in place."

The data shows a continual increase in the proportion of Indigenous people in Canadian prisons over the last decade. 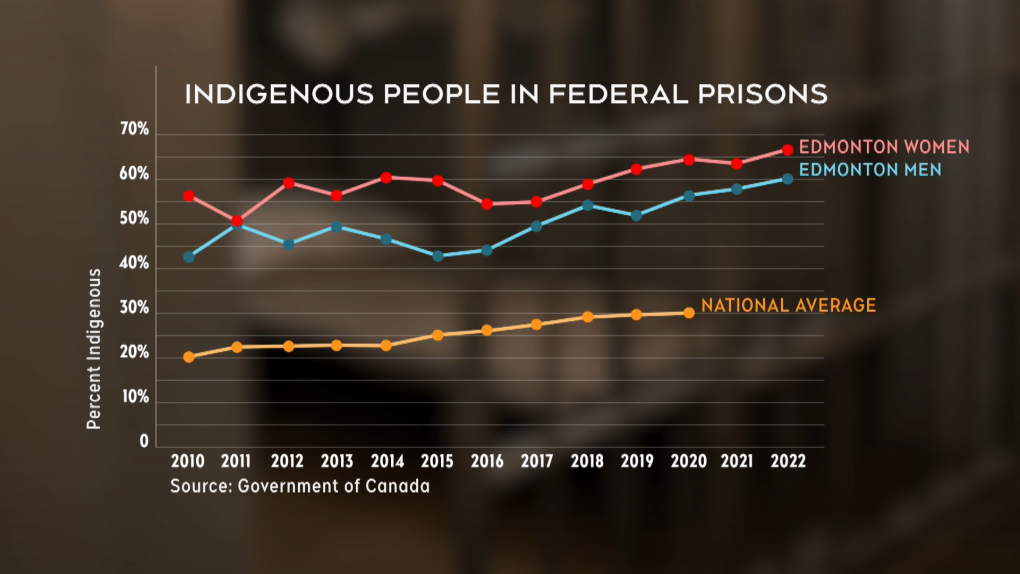 The rate is much higher, and also growing faster, in Edmonton's federal prisons.

According to a local researcher, having more autonomy in the justice system would improve outcomes for Indigenous people.

She suggests moving away from current colonial justice practices, to more traditional Indigenous ones.

"The colonial justice system was placed over top of those existing Indigenous laws, so (we need to increase) respect for those laws and respect for Indigenous people being able to chart their own path," Van Styvendale said.

The recent creation of specialized courts in Alberta is a good example of that, and Shirt expects those processes will help.

"What's taking place within the Edmonton and Calgary Indigenous Courts, there is a focus on a holistic approach that leads to healing for the person," Shirt said.

The Assembly of First Nations says an Ontario court has rejected a bid by National Chief RoseAnne Archibald to overturn her recent suspension.

'I just hope that when history is written, we did all that we can': Canadian singer Chantal Kreviazuk on Ukraine, reconciliation

Russian missile attacks on residential areas killed at least 21 people early Friday near the Ukrainian port of Odesa, authorities reported, a day after the withdrawal of Moscow's forces from an island in the Black Sea seemed to ease the threat to the city.

The World Health Organization's Europe chief warned Friday that monkeypox cases in the region have tripled in the last two weeks and urged countries to do more to ensure the previously rare disease does not become entrenched on the continent.

One of Toronto’s Canada Day fireworks displays has been cancelled and another has been postponed after a vendor pulled out at the last minute.