Homesickness around the holiday season led one couple living in northern Alberta to start a Christmas tree lot stocked with special firs from their family farm in Nova Scotia.

Fort McMurray is home to many east coasters, and for most of them, there's nothing like a Nova Scotian Balsam Fir Christmas tree.

The Lenihan family has grown the Christmas trees for generations, but the economic downturn in 2013 pushed Blake to leave the farm behind with his brother and work in Fort McMurray.

"Blake was heartbroken not to have a piece of home with him, and he really missed his Nova Scotia Balsam Fir Christmas trees," his wife Ann Kidston told CTV News Edmonton. "He was homesick."

"Blake and Laird have grown up harvesting and selling Christmas trees and selling firewood."

In 2014, Kidston set out to have one tree shipped from the family farm more than 5,000 kilometres away until she found out it would cost a small fortune.

"We knew there were other east coasters out here," she added. "So, why not try to bring a little bit of our home out here with us to Fort McMurray."

That's what prompted McMurrays Christmas Trees. The business has grown from sending just a dozen trees in its first year to hundreds.

"We've been doing it ever since," Kidston said. "It's a labour of love."

This year, 601 trees were shipped to the northern Alberta town. Half of the trees sold in just 24 hours this weekend.

"It's sort of like our Christmas when our trees arrive," Kidston said. "We love to be right there… cause you can just smell the balsam fir.

"Balsam fir has a wonderful fragrance," she added. 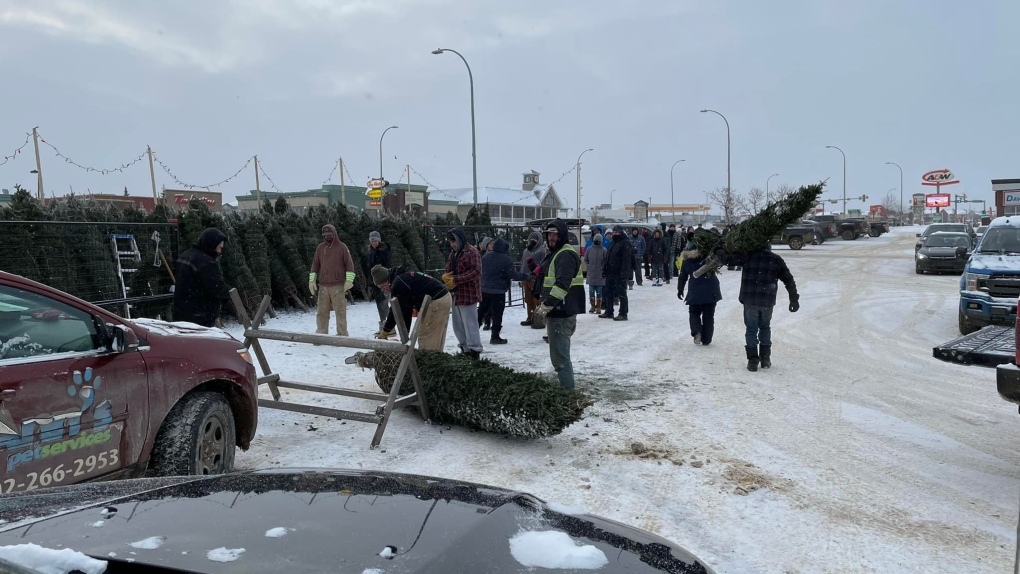 People lined up at the Christmas tree lot in Fort McMurray, Alta., Saturday morning to get their hands on a Balsam Fir tree (Supplied).

In the past, Kidston said the trees would be brought by truck from the farm in Lunenburg County to Halifax then taken by rail to Edmonton. From there, a truck would rush them to Fort McMurray.

With supply challenges due to the pandemic, the family had to enlist the help of a truck hauler to bring them the entire way to northern Alberta in time for Christmas.

Lloyd Benedict, who usually hauls seafood and helps others move between the provinces with Radars Moves, filled his transport truck with the trees.

"That's definitely a piece of home," Benedict said. "We figured the east coasters that live out here; it's a big part of being home."