EDMONTON -- First, Madeline and Samuel Boivin had to cancel their birthday parties because of COVID-19.

Then their birthday gifts were stolen off their front porch by a heartless thief.

But it's how local Mounties reacted that made it a birthday the Spruce Grove kids will never forget.

Days ago, the Boivins received a package on their doorstep containing birthday presents from England for Madeline, 4, and Samuel, who's turning 3 next week.

But before they got to open them, the package was swiped.

"It was mostly for them I felt the worst," said mother Alicia Boivin.

Instead of wallowing in self-isolation, Alicia decided to seek out surveillance video and images from her neighbours. When she gathered enough evidence, she called the police.

"I didn't really hope for much because I know they're really busy," she said.

But not only did Parkland RCMP respond to confirm they were investigating, they also had an idea on how to brighten up the youngsters' day.

Const. Debra Wash told the family she would replace the gifts, then passed it around to her detachment for everyone to sign.

Not only that — uniformed members of the detachment showed up at the Boivins home. With lights activated, Mounties got out and sang "Happy Birthday" while maintaining physical distancing, of course. 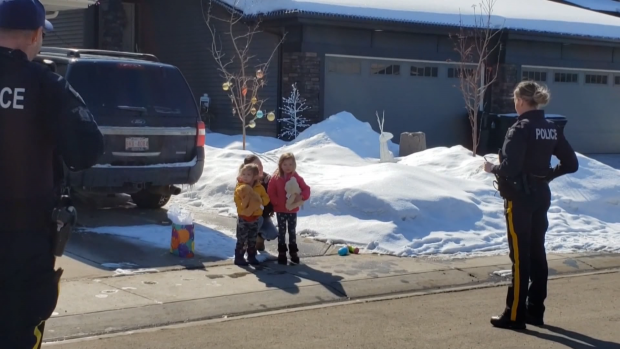 Samuel and Madeline Boivine were stunned when RCMP officer showed up at their Spruce Grove, Alta. home to sing 'Happy Birthday.' (Submitted)

"Their faces just lit up," said Alicia. "Like my son loves the police. He just thought it was the best thing ever."

While the "porch pirate" theft was a relatively minor file, for Wash and her colleagues, it was personal.

"We do really care," she said. "I don't think we could do this job if we didn't really care about the people we're serving in our community."

Alicia said she "couldn't believe" anyone would go to such great lengths to cheer up her kids. "It was just amazing."

That wasn't the only gift the family receifved, though.

Days after Parkland RCMP serenaded the birthday boy and girl, members from the detachment tracked down and arrested 35-year-old David Brown for theft related to the stolen gifts.

Police are also looking into whether Brown may be connected to other porch thefts in the area.

"I was so impressed and so, so happy," said Alicia.

With a report from CTV News Edmonton's Bill Fortier.