The province unveiled images of a new permanent statue to be placed on Alberta legislature grounds that will honour residential school survivors and the children that never made it home.

The new monument, which will form the centrepiece of the Reconciliation Garden, will be designed by Saddle Lake Cree Nation stone sculptor Stewart Steinhauer.

Steinhauer explained at the unveiling that the monument incorporates petroglyphic images from 8,000 years ago that predicted the coming of Europeans and the treaty process.

"This knowledge is still alive, in spite of a concerted effort to destroy this knowledge," he said. "It's really quite astonishing. The message is a powerful message."

It also contains symbols representing Inuit, First Nations, and Metis people, as well as bear claws, a symbol of healing.

For Steinhauer, stone carving is a way of storytelling but also a personal way to respond and grow from the trauma he experienced through his life.

"I was raised to not express emotions and really not to make an expression and not to talk," Steinhauer said. "And I think that the carving was a spontaneous way of making expression without talking."

Premier Jason Kenney said the location for the monument, at the site of the current seat of Alberta democracy and the historic Hudson's Bay Company Fort Edmonton outpost, will help to connect history. 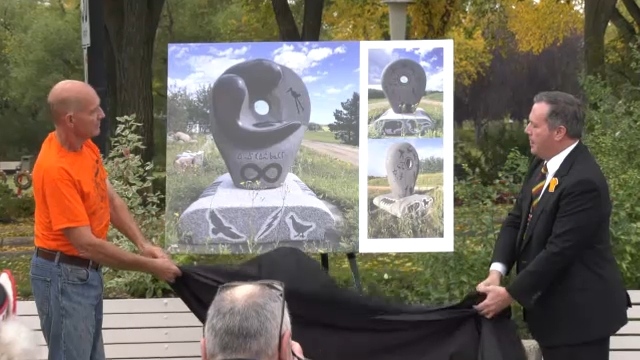 "That history has been a complicated and often sad and tragic history; it's one that more and more we are opening our eyes to," Kenney said. "A meeting of cultures which too often had a story of injustice and exploitation in it."

Kenney added that the monument and its unveiling on the National Day for Truth and Reconciliation will help to highlight historical wrongdoing but also highlight the strength of Indigenous Peoples.

"This day will not serve its purpose or the dignity of First Nations if it simply becomes a day of mourning because it must also be a celebration of resilience, the resilience of the Indigenous People overcoming adversity," he said.

Sheri Cunningham was a member of the Indigenous panel who screened artists' submissions for the new monument. She recalled how difficult it was to select which monument the province would commission from the seven short-listed submissions.

"Every single one had a narrative attached to it that was so compelling," Cunningham shared. "It was very heart-wrenching to read."

"There was something so beautiful and unique about every single one."

Indigenous Relations Minister Rick Wilson highlighted that the Reconciliation Garden, alongside creating the provincial strategy for addressing missing and murdered Indigenous women and girls and the Alberta Indigenous Opportunities Corporation, as all helping advance reconciliation in the province.

"Today, we take stock of where we came from and recognize that (with) our actions together, we can make healing possible," he said.

Wilson said he was proud that the province was now one step closer to fulfilling the Truth and Reconciliation Commission's Call to Action 82, creating a publicly accessible monument honouring residential school survivors.

"We know that learning the truth is central to reconciliation," Wilson added. "The truth will not only help us remember but help us to look forward and focus on future generations to strengthen their potential for success."

The federal government is reviewing an RCMP equipment contract with a company that has ties to China's government, the prime minister said Wednesday.

The federal government appears to be on the verge of presenting new legislation aimed at strengthening Canada's early learning and child-care system. On Thursday at 11 a.m. ET, Minister of Families, Children and Social Development Karina Gould will be making what her office is calling a 'national announcement' on this topic.

Two organizers of the 'Freedom Convoy' won’t receive frozen donation funds to pay for their legal defence of a $300-million potential class-action lawsuit.

A 12-year-old boy has been arrested and charged with murder in a hit-and-run car crash that killed an 82-year-old woman last month, Dallas police said Wednesday.

What the latest Bank of Canada rate hike means for inflation, consumers

The Bank of Canada hiked its key policy rate by half a percentage point to 4.25 per cent -- the highest it's been since January 2008 -- on Wednesday in its final rate decision of a year that has been marked by stubbornly high inflation and rapidly increasing interest rates.