If Edmonton does go ahead with a new gondola over the North Saskatchewan River, a local businessman has a grand idea for what to surround it with on the southern edge of the valley.

Scott Hughes, co-owner of the Ritchie Mill office building, has commissioned a design that includes two mixed-use towers and a second-floor gondola stop built atop underground parking and surrounded by park space.

He's proposing that it be built on the northern tip of End of Steel Park, which is across the street from his building on the corner of Saskatchewan Drive and Tommy Banks Way.

Prairie Sky Gondola wants to build the 2.5 kilometre line from downtown to Old Strathcona and officials with that company are set to meet with city councillors Wednesday to discuss land agreements.

"I'm suggesting let's do a community high rise, mixed market housing so it's affordable. Let's build something with the gondola attached to it so it can be a true transit-oriented development and then we have something that's a win, win, win," Hughes explained to CTV News Edmonton Tuesday.

Hughes said he is not involved with Prairie Sky, instead he's getting involved over concerns that gondola infrastructure will swallow up the parking spaces he needs to run his business.

The design he's proposing includes a skywalk between towers and enough parking for residents and nearby businesses. Hughes said the financials haven't been sorted, but he's interested in taking a financial stake, if the city and gondola company do the same.

"I've been in commercial real estate for over 25 years, my whole career. So once we get the vision and we get the commitment from everybody, we'll make it work from a financial standpoint," Hughes stated.

"Whether the gondola gets approved or not, this is something that we want to provide the community as an idea to develop housing." 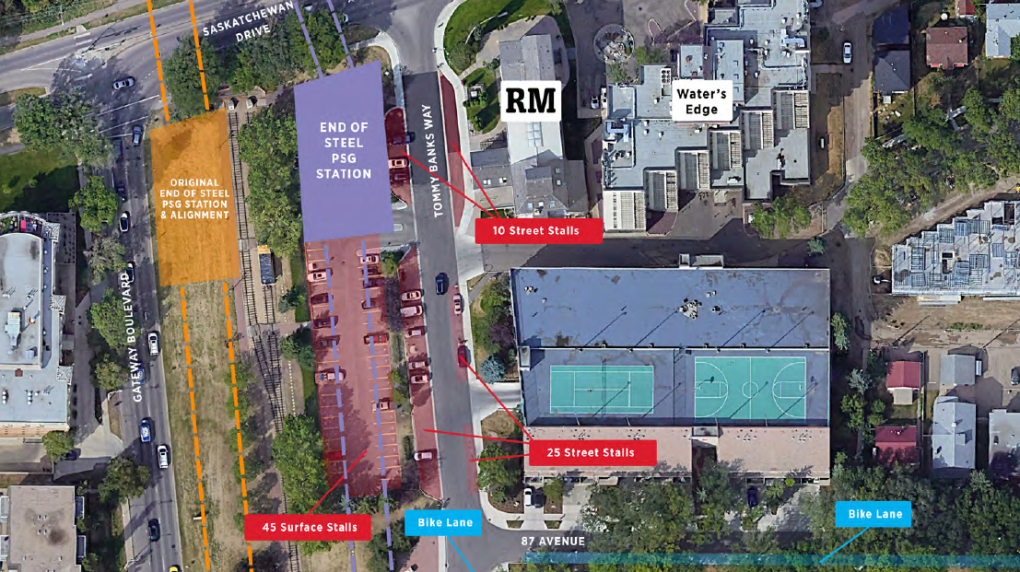 Hughes sent a letter Monday outlining his proposal to city councillors and said the feedback he's received so far has been positive.

Prairie Sky Gondola President Jeffrey Hansen-Carlson told CTV News Edmonton Tuesday night that he was unaware of Hughes' proposal, but that he would have more to say on Wednesday.

Prairie Sky has promised that the gondola, which is proposed to be built and running by 2026, will "never cost the city or its taxpayers any money, either directly or indirectly."

The company's website states that if conditional approval is received from council it will start "environmental, geotechnical, archeological, palaeontology and heritage impact assessments as well as design and public and Indigenous engagement."

A series of explosions rocked the eastern Ukraine city of Kharkiv early Saturday, sending towering plumes of illuminated smoke in the sky and triggering a series of secondary explosions.

The Public Health Agency of Canada (PHAC) is warning Canadian travellers entering Uganda to take extra precautions before flying due to an Ebola outbreak that was declared in the nation last month.

Did vaccines make a difference? Study looks at rates of severe illness from COVID-19

A study of 1.6 million U.S. patients has found that COVID-19 vaccines and boosters lead to low rates of severe illness and death.

A man with a large kitchen knife who terrorized tourists and locals on the Las Vegas Strip in a stabbing rampage that left two people dead and six others wounded will be charged with murder, the region's top prosecutor said Friday.

The Toronto Blue Jays take on the Seattle Mariners Friday in Game 1 of the AL wild-card series at Rogers Centre this weekend. CTVNewsToronto.ca will have live updates throughout the game.