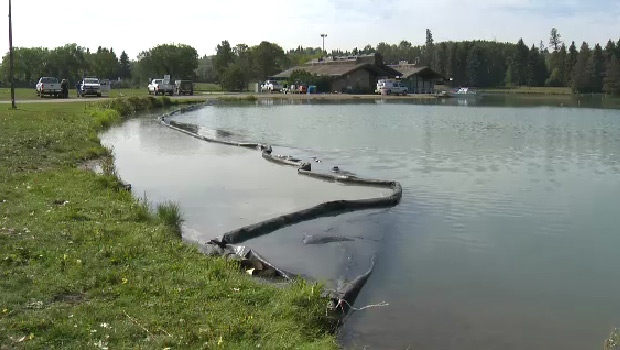 Crews have moved blue-green algae blooms found on the lake at Hawrelak Park to the side, and held them there with barriers, shown here on Friday, August 28.

EDMONTON -- City staff will present a report on Wednesday detailing a number of options to upgrade the water quality of the lake at Hawrelak Park.

The proposed options include physical and mechanical means as well as biological and chemical solutions.

The specific options include:

Other options include modifying the landscape to reduce water access for geese as well as adding bacteria, pesticides or hydrogen peroxide to the water.

The upgrades would be done in tandem with the already planned infrastructure upgrades being scheduled to rehabilitate the park.

The lake is used for the professional triathlon race held at the park annually since 2014. The changes will keep the lake water at race standards but the report notes the water still won't be clean enough for the general public to swim in.