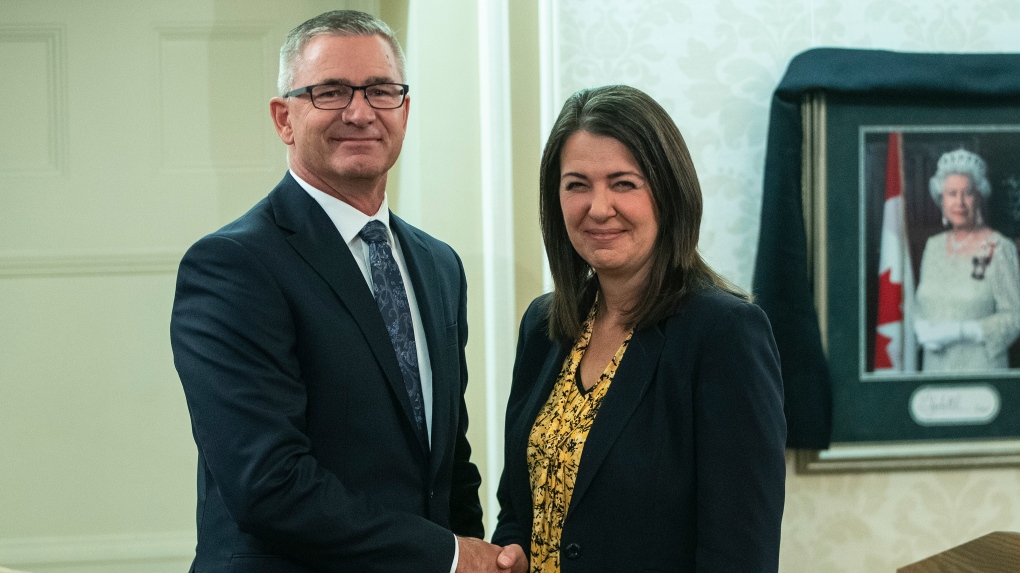 Travis Toews shakes hands with Alberta Premier Danielle Smith after Toews was sworn into cabinet as President of Treasury Board and Minister of Finance in Edmonton, Monday, Oct. 24, 2022. THE CANADIAN PRESS/Jason Franson
EDMONTON -

Alberta's finance minister says there will be legislation next month to re-index both income tax brackets and benefit payments for seniors and the severely handicapped.

“There will be legislation coming forward in this fall sitting and it will certainly support the commitments we've made to date around re-indexing,” Toews said in an interview Tuesday.

“That's going to be part of our affordability measure broadly. It will consist of a combination of additional tax relief and some targeted support to those who are really feeling it right now (due to rising inflation).”

Three years ago, the government de-indexed income tax rates and benefit payments, such as its Assured Income for the Severely Handicapped, saying they were unaffordable in difficult economic times. But it has since announced with the budget back in surplus that they can be re-indexed.

Toews made the comments after Smith released a mandate letter outlining goals and priorities for his department.

The letter directs Toews to help implement new measures to assist Albertans dealing with high inflation while also keeping operational spending at or below the cost of inflation plus population growth.

Toews is also tasked with making a recommendation on having Alberta go it alone on a provincial pension plan and on creating an Alberta revenue agency to collect all taxes, including income tax.

Toews said work continues on both those files and that more information will be coming to Albertans on the pro and cons of the ventures.

“We've been doing the econometric work, the actuarial work,” he said. “We'll have a report to present in the coming days, and I think it's critically important Albertans understand the opportunities and risks of an Alberta pension plan.”

Smith, during her campaign this summer to become leader of the United Conservative Party and premier, said she wants to pursue an Alberta police force to replace the RCMP and create a provincial revenue agency.

She has said such stand-alone entities are needed to give teeth to her proposed Alberta sovereignty act to push back on federal control in provincial affairs.

Opposition NDP finance critic Shannon Phillips said both the Rural Municipalities of Alberta and Alberta Municipalities have rejected the idea of a provincial police force, mirroring results in public polling.

“Albertans have been clear that they do not support an Alberta pension plan or police force. And yet, the UCP continues to push ahead with both of them. In fact, they're willing to gamble Albertans' pensions to pay for it all. This is catastrophically stupid,” said Phillips in a statement.

“It is not up to Danielle Smith to decide to gamble Albertans' pensions like this. If she really wants to move ahead with this, she can run on it in the next election and let Albertans have their say. Until then, she better not come near anyone's pension.”

Smith has also promised to pursue Health Spending Accounts. The plan would be to give every Albertan $300 to spend on therapies, such as naturopathy, mental health counselling, dental work or acupuncture, that are not covered by the province.

There would also be tax incentives to encourage businesses and charities to contribute to the accounts.

Toews said his department is still crunching numbers on that proposal and there won't be anything concrete until the new year.

“We've had high-level discussions, but we have significant work to do before we're going to be able to understand the cost,” said Toews.

“My expectation is it will be dealt with in the budget, certainly accounted for in the (February) budget, as we're going to be rolling out a multi-year fiscal plan.”

This report by The Canadian Press was first published Nov. 15, 2022.