Alberta's health-care system is playing catch-up to pre-pandemic times as new documents obtained by CTV News show the system is underperforming and failing to achieve targets it set out for itself.

An Alberta Surgical Initiative (ASI) presentation by Alberta Health Services shows the province not only missed its wait-time reduction target for this current fiscal year, but it doesn't expect to reach the target until the end of the next fiscal year — spring 2024.

Meantime, acute-care sites in Alberta — like publicly owned surgical facilities and hospitals — were expected to perform 282,455 surgeries by the end of the 2022/23 fiscal year, but only performed 245,880 — missing its target by 36,575 surgeries.

For comparison, the province's pre-pandemic baseline was 256,600 surgeries.

So, the province is not only going to miss its 22/23 target, but it's still over 10,000 surgeries from returning to pre-pandemic levels. 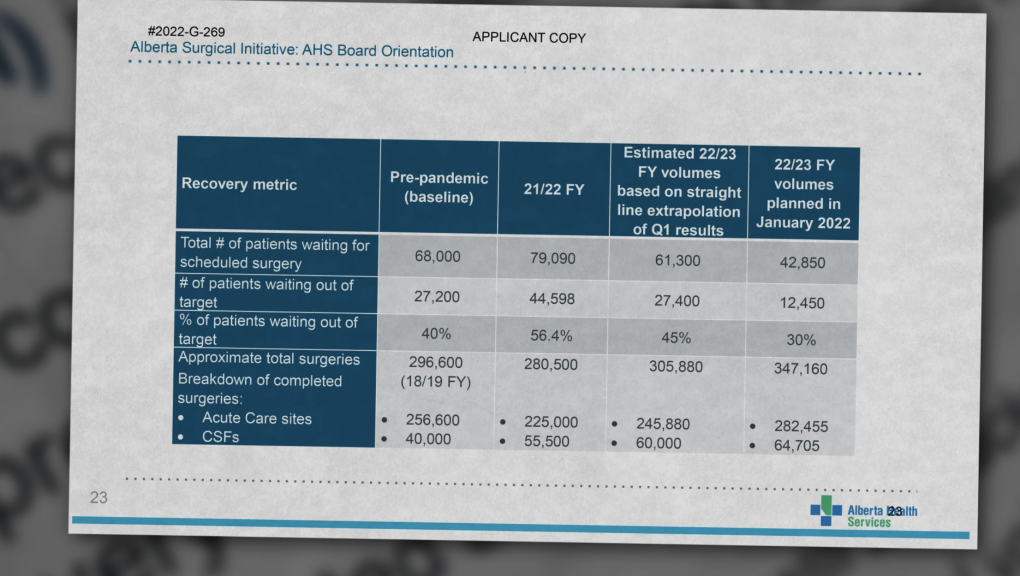 "Creating a private surgical centre doesn't create another surgeon, it doesn't create more nurses, it simply moves people out of the public system, and the numbers you have today are showing that -- that they're able to get more surgeries done in private surgical centres and we're not keeping up in the public," said Chris Gallaway, executive director of Friends of Medicare.

“This isn't about access, this isn't about patient care, it isn't about wait lists they claim they're trying to adjust, it's really about using our public dollars to provide profit for private surgical centres."

Earlier this week, health workers shared concerns the situation at a Red Deer hospital is so dire they feel the system will collapse.

"It's creating more chaos in our healthcare and Albertans are the ones who are paying the price, and it is exactly related to this focus that the UCP has on privatizing healthcare," Alberta NDP leader Rachel Notley said.

"They're making the problem of overall health-care capacity worse, because they're now stealing those important front-line health-care workers out of the public system and putting them into the private one, where profit is now the fundamental motive."

Health Minister Jason Copping's office says the delays aren't new and it's pleased with AHS reaffirming its commitment to achieve its goals by the end of the next fiscal year.

"We campaigned on reducing surgery wait times after the NDP spent four years watching them get longer and did nothing about them. Reducing wait times is the right goal and we’ll keep working at it until we deliver on our promise to Albertans," Steve Buick, Copping's press secretary, added.

The Winnipeg Police Service believes the remains of two victims of an alleged serial killer are in a landfill north of the city, but say the recovery of their bodies is likely impossible.

Democratic Sen. Raphael Warnock defeated Republican challenger Herschel Walker in a Georgia runoff election Tuesday, ensuring Democrats an outright majority in the Senate for the rest of President Joe Biden’s term and helping cap an underwhelming midterm cycle for the GOP in the last major vote of the year.

Having a poor turnout for a book signing is something every author dreads, but after debut author Chelsea Banning tweeted her disappointment after an event, the literary community came together to share countless stories of their own event disappointments to uplift one another.

'Bring them back!': Calls to bring Canadians home from Syria come from inside and outside of court

'Bring them back!' activists yell at lawyers as they walk into the Federal Court in Ottawa, where a judge will decide whether or not to order the Canadian government to repatriate more than 40 Canadians imprisoned in northeast Syria.

In the 73 minutes on Tuesday afternoon that it took for Prime Minister Justin Trudeau and five other dignitaries to officially open the 15th global talks to save nature from human destruction, statistics suggest another 4,000 hectares of forest around the world was lost to that same force.