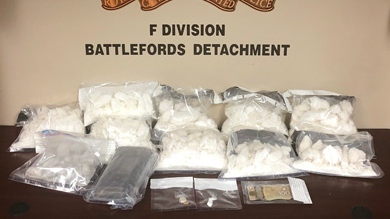 North Battleford RCMP arrested Diehl on Dec. 7, 2020, after they received a report from a concerned citizen about an erratic driver. Police located the SUV on Highway 16 and arrested Diehl.

Insp. Tom Beck, the Officer in Charge of North Battleford RCMP Detachment, applauded the diligence of both the members of the public who contacted them and the police officers responding to the call.

“Police officers see first-hand the impacts of drug use. We also know drugs are often laced with other harmful substances that can result in tragedy. One of the things we can do to prevent these tragedies and other ripple effects from occurring, is to stem the flow of these substances before they trickle into our Saskatchewan communities and beyond. The seizure of this quantity of methamphetamine will certainly have a significant, resounding impact.”

The charges against Diehl haven't been proven in court.