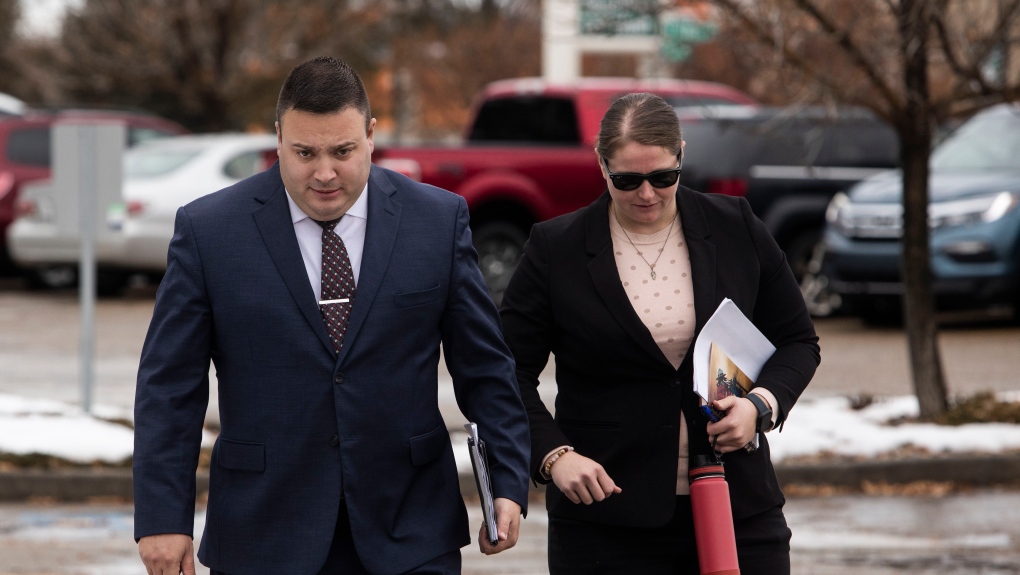 Cpl. Randy Stenger, left, and Const. Jessica Brown, return to court to resume their jury trial on charges of manslaughter and aggravated assault in Edmonton on Friday, Nov. 25, 2022. THE CANADIAN PRESS/Amber Bracken

An Alberta Mountie testified Wednesday that she feared for her life before she and another officer fatally shot a man at a rest stop northwest of Edmonton.

“That’s not something I ever wanted to do in my entire career," Const. Jessica Brown told a jury as she teared up.

Brown and Cpl. Randy Stenger have pleaded not guilty to manslaughter and aggravated assault in the July 3, 2018, shooting of Clayton Crawford near Whitecourt, Alta.

The jury heard RCMP were looking for a purple 1992 Dodge Dakota pickup truck that had been spotted fleeing the scene of a shooting a day earlier in Valhalla Centre. Crawford’s girlfriend had been shot in the leg and other vehicles were also seen leaving the area.

Grande Prairie RCMP later notified the Whitecourt detachment that an off-duty officer had seen the truck at the Chickadee Creek rest stop. Court heard there was a struggle when Brown, Stenger and another officer approached the vehicle.

"I got the sense that the driver was going to start the vehicle," Brown said, adding she had near-misses with vehicles at other points in her career.

Brown told the court that after Crawford started the truck and began to pull away in reverse, she heard Stenger shoot. Brown then began shooting at the driver with her carbine rifle.

"I just kept thinking: 'Why?'" Brown said. "This guy has no reason to be going backward except to try to kill us."

Brown said Crawford had a clear exit route ahead of him.

Three police cruisers at the scene were equipped with cameras that recorded the shooting. The jury has watched the video multiple times. It shows the Mounties approaching the truck and the ensuing struggle, followed by shots fired while the truck starts to leave the rest area before running into a nearby ditch.

RCMP later found a machete in the truck and a butcher knife under its front seat.

The jury also heard Monday that Crawford had methamphetamines in his blood at the time of his death.

Forensic toxicologist Craig Chatter testified that the concentration was relatively high and Crawford was likely under the influence of methamphetamines when he died, or shortly before.

"I've had a lot of negative interactions with people on methamphetamines," Brown told the jury while talking about her experience at the Whitecourt detachment. It was not known to officers at the time of the shooting that Crawford had the drug in his system, the jury heard.

In opening statements last week, lawyers said a potential dispute over a "drug den" could have instigated the shooting in Valhalla Centre and Crawford could have been a target.

CBC reported last week that there was confusion over whether Crawford was considered a suspect or a witness in the Valhalla Centre shooting. Cpl. Eldon Chillog testified he did not tell Brown that the individual in the truck was a suspect, but Brown testified Wednesday that she believed Crawford was.

The jury heard that Crawford was wanted on warrants at the time. He had previously been arrested for shooting a firearm and was known to police as being involved in the drug trade.

Early in her testimony, Brown, 31, told the jury that she wanted to be a Mountie since she was six years old, when she saw RCMP officers on horseback in their red uniforms during a parade.

"I know I wanted to have a job where I could help people in some capacity."

This report by The Canadian Press was first published Nov. 30, 2022.