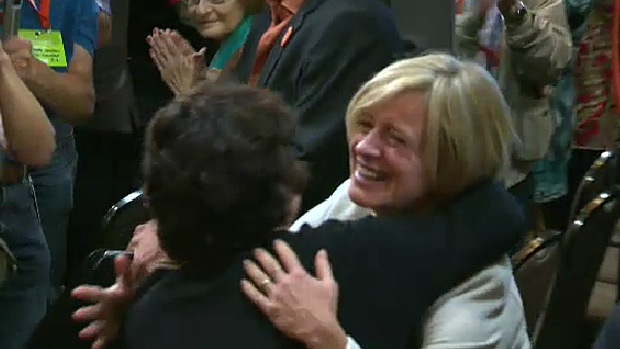 Rachel Notley was elected the next leader of the Alberta NDP on Saturday, Oct. 18.

Rachel Notley wasn't even 10 years-old when she went on her first protest march.

It was in the early 1970s, in Edmonton, with her mother Sandy.

"She took me on some anti-war demonstration. I honestly can't even remember what it was," said Notley in an interview.

"I remember walking across the High Level Bridge and thinking 'Wow, this is really a very long walk.' You know, I was a kid," she laughed.

But what stuck with her was the energy of people coming together to try to change things.

"It was just about really doing everything you can to be heard," she said.

"A (protest) letter is easily dismissed. Five hundred people marching together is less so."

Four decades later, Notley moves to the head of the march as the new leader of Alberta's NDP.

The two-term MLA says the party, despite having four seats in the legislature, is poised for a resurgence not seen for two decades.

"We're a little bit further ahead in some ways, but we have a lot of ground to cover," she said.

"I like to think that we've laid the groundwork, though. We've spread the seed, as it were, that we're well positioned to see a pretty significant step forward."

Notley, 50, grew up with politics and around politics. It's part of her DNA.

Born April 17, 1964, she grew up in Fairview in northern Alberta as the oldest of three children to Grant and Sandy Notley.

He helped found the Alberta NDP and take it from a fledgling pass-the-hat movement in 1962 to one that captured 16 seats in 1986.

He won a seat in the legislature in 1971 and for years was the only NDP member under the dome.

Grant Notley built a popular following. He became known for his, at times, quixotic fight for social justice, but also for reasoned and razor-sharp analysis and the ability to see beyond the means to focus on the ends.

When the national energy program was created in 1980s, he flayed both the province and the feds for putting their feud over oil royalties ahead of the public good.

He was around home as much as possible, but time was tight and the hours long.

Rachel was 20 when her father, on his way home from Edmonton on a snowy night on October 19, 1984, was killed in a plane crash near High Prairie.

Thousands mourned and in the years that followed, Grant Notley's stature has grown. A park has been named for him in Edmonton and his riding has been renamed Dunvegan-Central Peace-Notley.

Rachel got a political science degree from the University of Alberta, then a law degree at Osgoode Hall.

She went to work as a labour lawyer, helping injured workers with compensation claims.

She moved to B.C. and helped the NDP government under Premier Mike Harcourt.

As an adviser to then attorney general Ujjal Dosanjh, Notley was at the table as they drafted legislation to improve occupational health and safety rules and to extend benefits for same-sex couples.

"There's no question that being in a position to actually be in the room where decisions were made about what went into legislation and what didn't was incredibly formative for me," she said.

It was there she decided to come home and enter politics. She didn't run in 2004 because she was busy caring for two toddlers.

But in 2008 she ran in Edmonton-Strathcona and won.

Was it always meant to be, she is asked, that the daughter of Grant Notley would one day assume his place as leader?

"I would not have said it was inevitable," she replied.

"Maybe inevitable that I would get into politics," she added, although she wasn't sure she wanted to seek public office until she was in her 30s.

At home, she and husband Lou are now raising two teenagers in Mill Creek.

She loves downhill skiing and began jogging years ago to deliver an endorphin rush to help kick smoking.

She still runs when she can.

But she finds her best exercise is walking 40 minutes from home to work at the legislature. It helps focus her thoughts on the way to work and clear her head on the way back.

Otherwise, she works to make time with friends, with a nice bottle of wine if possible -- the best way to not let an all-consuming job eat you up.

"A very seasoned, wizened old political adviser (in B.C.) said to those of us excitedly running around the pointy buildings, 'No matter what you do, never, ever lose touch with your own friends and your life outside of politics."'

Sage advice that will now surely be put to the test as Notley marks one of the best days of her life almost 30 years to the day after one of the worst.