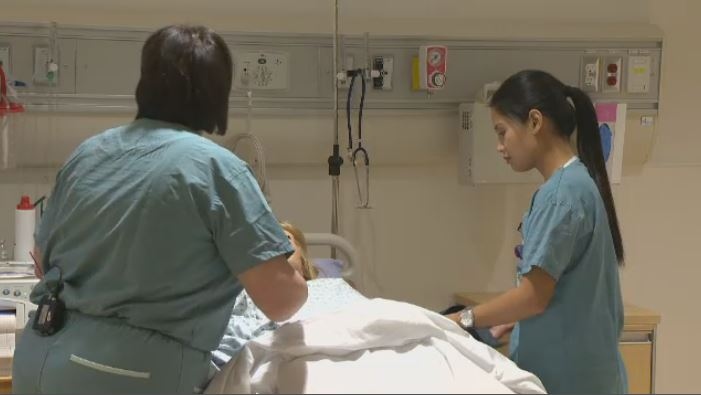 EDMONTON -- The head of the United Nurses of Alberta says she has not seen such regressive contract demands from the province since the strike year of 1988, and says some nurses are wondering if history is set for a repeat.

“The last time I saw the magnitude of rollbacks tabled by an employer with us was in fact the 1988 round of bargaining,” Heather Smith said in an interview.

Alberta's nursing pay, benefits and work rules are front and centre as Premier Jason Kenney's government is eyeing sweeping reforms on health delivery, including fundamental changes to how nurses are paid and deployed.

Asked if strike is a possibility, Smith replied, “Any decision will be (up to the) rank and file, but I do know that it is a subject of a lot of conversations in workplaces.

“Certainly any time I meet with nurses that is a question that comes up: is this round of bargaining going to end in a strike?”

Alberta's government and its nurses have been locking horns over issues at the contract table and over a benchmark report released last week that calls on Alberta to re-examine wages, benefits, staffing roles and ratios for nurses.

In the current round of bargaining which began last month, the UNA says the government is proposing no wage increases over the next four years along with reductions to overtime, holiday and premium pay. There would also be reductions in worker scheduling rights and benefits, including eliminating designated rest days for part-timers.

The UNA, which represents 29,000 nurses, has proposed two per cent wage hikes in each of the first two years along with other changes.

Alberta Health Services, the arm of government tasked with delivering front-line care, is to come back in mid-May with an implementation plan.

The report says registered nurses make on average just over $94,000 a year, about seven per cent more than the Canadian average, but by working extra shifts and with other premium pay can earn substantially more.

It found two-thirds of registered nurses are casual or part-time and that this high number, coupled with attendant pay and scheduling benefits, is not cost-effective and causes scheduling problems.

It says Alberta has higher nursing staffing levels than comparable jurisdictions and that highly skilled staff are being used in situations where lesser skilled staff would do, such as keeping watch on at-risk patients.

Smith says salaries across many professions in Alberta, not just nurses, are higher than average. She said there is work to do in areas like part-timers, but said it's difficult to do when vacancies aren't filled but the work still has to get done.

“We need to continue to have dialogues with our unions, especially the UNA,” Shandro told reporters Thursday.

“To the extent that any of these recommendations are brought up by either us or them at the negotiating table, I encourage everybody to be able to talk about these issues openly.

“I think at the end of the day we're going to have an agreement that works in the best interests of patients.”

Opposition NDP Leader Rachel Notley said the government is “trying to carve out $600 million out of the system on the backs of nurses.”

“If you replace nurses with folks with lower levels of education and expertise, what is that going to mean? Lower quality of care. And that is exactly the thing that Jason Kenney (in the last election) promised Albertans that he would not impose on them,” she said.

This report by The Canadian Press was first published on Feb. 9, 2020.