Smith’s United Conservative caucus used its majority Wednesday night to pass an amendment to affirm that the Alberta legislature still has the last word on lawmaking.

It then moved directly to third and final reading on the bill and was approved around 1 a.m. Thursday, with government members standing to applaud after it cleared the final legislative hurdle.

The final vote was 27-7 split along party lines: Smith’s UCP voting for it and the Opposition NDP against. 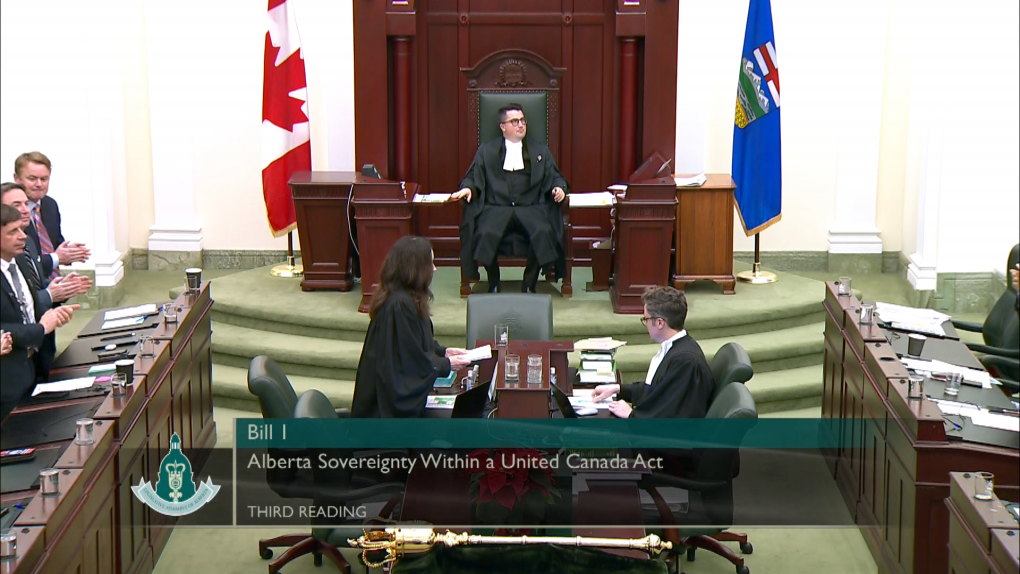 Smith, speaking to the bill in third reading, said it is time to reset the relationship with Prime Minister Justin Trudeau’s government.

“It’s not like Ottawa is a national government,” said Smith.

Immediately after the vote, NDP Leader Rachel Notley tweeted, "For the record, if we form government, we will move to repeal this horrible, anti-democratic legislation."

The next election is set for May 29.

The NDP voted against the amendment and the bill at all three readings, calling the legislation “a hot mess express” of unconstitutional presumptions and capricious provincial powers that offend the democratic process and put a chill on business investment.

NDP deputy leader Sarah Hoffman said the UCP had to use its majority to choke off debate at three stages of debate on the bill in order to pass it just over a week after Smith introduced to blunt growing opposition.

“People don’t like it. That’s why you’re trying to ram it through here in the middle of the night," said Hoffman.

“This (bill) erodes democracy, it hurts our economy, and it is damaging to our national and our international reputation.”

The bill was introduced by Smith as centrepiece legislation to pursue a more confrontational approach with Trudeau’s government on a range of issues deemed to be overreach in provincial areas of responsibility.

The bill faced widespread criticism from the start for provisions granting Smith and her cabinet sweeping powers to rewrite legislation. Smith initially denied the bill had such authority but as outrage mounted, she announced over the weekend there would be changes.

The amendment vote also passed along party lines. Before that vote, Notley told the house that while the bill effectively rolls back the power of cabinet to rewrite laws, an accompanying change narrowing the definition of federal harm was still worded too ambiguously to be effective.

Notley also said egregious flaws remain in the bill given it says the legislature, not the courts, gets to decide what is and is not constitutional.

Notley said on top of that, Smith failed to consult treaty chiefs before introducing the bill, and said this will “absolutely torch the critically important nation-to-nation relationship that should exist between this premier and the leaders of the treaties.”

The UCP passed motions at the final three stages of the bill to limit debate.

Such measures are allowed to balance discussion with keeping the business of the house moving.

Government House Leader Joseph Schow said Bill 1 received about 18 hours of debate, which he called a healthy total, particularly given the NDP said it wouldn’t work to make the bill better.

“There comes a point when the same message gets repeated over and over,” said Schow.

Earlier Wednesday in Ottawa, First Nations chiefs from Alberta and Saskatchewan called for both provinces to scrap their respective provincial rights bills, calling them inherently undemocratic, unconstitutional and an infringement on Indigenous rights.

Treaty 6 Chief Tony Alexis of Alberta's Alexis Nakota Sioux Nation said there has been no consultation or dialogue with First Nations around the Alberta bill and said it could set a harmful precedent.

On Wednesday afternoon, Rick Wilson, Alberta's Indigenous relations minister, told reporters that while Bill 1 specifies that treaty rights are respected, he has heard the leaders' concerns and will work to address them.

Wilson said the title of the bill itself - the Alberta Sovereignty Within a United Canada Act - is problematic.

"I've been on the phone, of course, with First Nations leaders across the province and a lot of the concerns are around just calling it the sovereignty act. Like, what does that mean?'' said Wilson.

"In fairness, there's not a lot of clarification around what that means. Should we have done more consultation? Absolutely.''

-- With files from Kelly Geraldine Malone in Saskatoon

This report by The Canadian Press was first published Dec. 8, 2022.

A family in the remote First Nation community in Peawanuck, Ont., is dealing not only with the death of their young daughter, but the loss of everything they owned in a Jan. 28 house fire.

How did a radioactive capsule go missing in Australia and how dangerous is it?

Australian authorities are mounting an extensive search for a tiny radioactive capsule believed to have fallen out of a road train that travelled 1,400 km in Western Australia. Here's what you need to know:

As the B.C. government decriminalizes small amounts of hard drugs, critics note there are still not enough treatment resources for the users seeking them.

Two monkeys were taken from the Dallas Zoo on Monday, police said, the latest in a string of odd incidents at the attraction being investigated -- including fences being cut and the suspicious death of an endangered vulture in the past few weeks.

Driver in California cliff crash that injured 4 is charged

The driver of a car that plunged off a treacherous cliff in northern California, seriously injuring himself, his wife and their two young children, was charged Monday with attempted murder.

A Russian company said it will offer five million roubles (US$72,000) in cash to the first soldiers who destroy or capture western-made tanks in Ukraine, after the Kremlin vowed Russian forces would wipe out any Western tanks shipped to Ukraine.