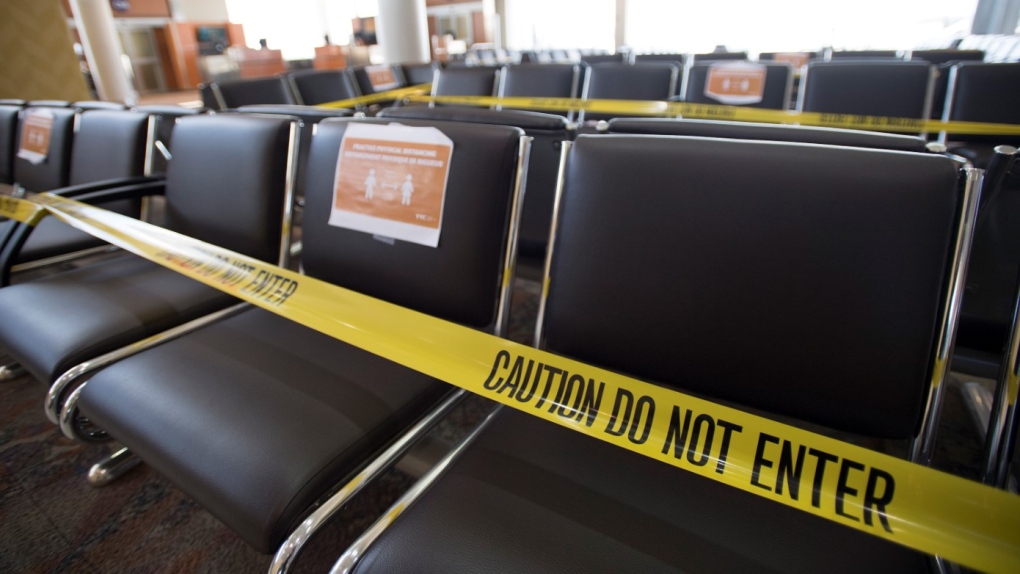 Seats in the waiting area of domestic departures lounge of Calgary International Airport are seen with caution tape on them Tuesday, June 9, 2020.THE CANADIAN PRESS/Jonathan Hayward​

CALGARY -- The number of positive COVID-19 tests in a pilot project for international travellers at the Calgary airport and a United States border crossing in southern Alberta has been reasonably low after its first six weeks and the program could soon be expanding to other locations.

The program offers Canadians the option of getting a test when they arrive. They must then self-isolate for 24 to 48 hours while they wait for the results.

If the results are negative, they can leave quarantine, but must monitor for symptoms daily and get a second swab within six to seven days of their arrival date.

“This project is the first of its kind in Canada. We continue to work to refine processes in co-operation with our partners, and all participating travellers are being closely monitored,” McMillan said.

“The intent is to add the Edmonton International Airport to the pilot in 2021.”

As of Thursday, the province said 14,382 travellers had taken tests.

About 1.4 per cent were positive with the initial swab. After the second test, the infection rate was 0.7 per cent.

The project is scheduled to last six months, or until 52,000 passengers have gone through the process, he added. There are also plans to expand it next year.

The program is fully voluntary. Travellers can register up to five days before their arrival. Those who don't take part are required to self-isolate for 14 days.

The initiative is a partnership between the Alberta and federal governments, and is currently only offered for those entering Canada by air through the Calgary International Airport and by land at the Coutts, Alta., border crossing.

Canadian citizens, permanent residents and foreign nationals who are allowed to enter the country are eligible to participate.

A spokesman with the Calgary airport said it saw a 77 per cent drop in its number of passengers at the end of October, compared to last year.

“It's running well from the Calgary Airport Authority's perspective. We understand there's a lot of positive interest in the pilot among qualified international arriving guests,” Fiest said.

“The Authority hopes the results of the pilot will lead to reducing and one day eliminating the current 14-day self-isolation requirements.”

This report by The Canadian Press was first published Dec., 12, 2020