EDMONTON -- Effective immediately, police in Alberta will no longer be able to ‘card’ members of the public, and must submit data on their use of street checks to the provincial government.

Solicitor General and Justice Minister Kaycee Madu made the announcement Thursday alongside the chiefs of some of the province’s largest police agencies.

“In theory, these practices are a useful tool through which police may garner intelligence on criminal activity and engage with the public. But in practice, we have heard they are often misused and arbitrarily target (and) racialize minority communities,” he said.

Carding is the practice of randomly obtaining personal and identifying information from members of the public.

The minister said the purpose of a ban is to ensure consistent policy across the province.

A street check is a police practice of stopping people and collecting their information purposely for an investigative reason. Those, Madu said, are legitimate and can be helpful to law enforcement when done lawfully.

As such, the province will continue allowing the practice but require police agencies to review their own street check data quarterly and report to the province annually.

According to Madu, the changes come from the province hearing community concerns about systemic racism.

However, a former lawyer and Siksika Nation councillor questioned the government’s intent behind what he called long overdue action.

“I can’t help but wonder what is really driving this announcement. Is it integrity? Is it a change of heart? Or maybe, finally, it is the spirit or reconciliation taking form. Or, is this a PR stunt designed at pre-emptive damage control, an attempt to avoid destruction of property, mass protests and violent public outrage, the likes of which were experienced in the U.S. over the deaths of people such as Breonna Taylor, Eric Garner and George Floyd?” Samuel Crowfoot asked.

Crowfoot told the government, “Show us. Back your words up. First Nations people are sick pf hearing empty words and promises.”

To ensure officers aren’t carding members of the public under the guise of conducting a street check, they’ll be expected under the new rules to identify why a citizen is being stopped.

An officer, Madu explained, would be responsible for telling the citizen it is their right not to volunteer the information being asked of them.

He also said the government would be educating the public on the difference between carding and street checks.

“There has to be a reasonable basis for police to deploy the tactic of street checks. I think citizens have an expectation from their law enforcement to be informed of why that interaction is taking place and... that they do have certain rights that are given to them by virtue of our constitution.”

The city police services in both Edmonton and Calgary already have policies against carding.

According to Edmonton Police Service data, officers reported conducting 3,591 street checks between Jan. 1 and June 30, 2020 – a nearly 48 per cent reduction over 2019.

That year, officers conducted 6,889 street checks in the same timeframe. 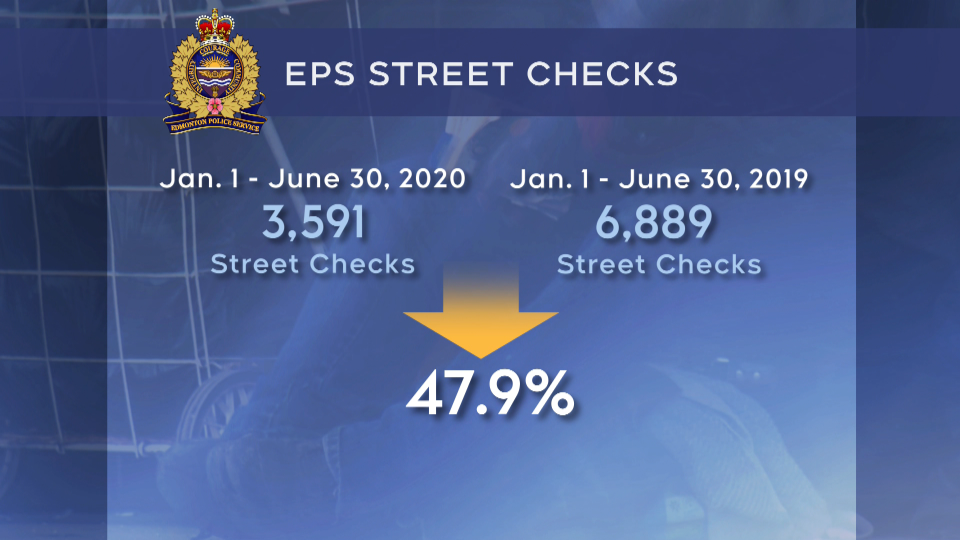 Calgary’s chief of police estimated his officers conduct some 8,700 street checks each year – or roughly one per hour. Half of those occur during dispatch calls when officers investigate a complaint.

“What I do see coming out of this is our officers very importantly are going to have the tools that they require to effectively service the community in the ways that they need to,” Chief Mark Nuefeld said.

“And at the same time, our community very importantly is going to know what they can anticipate in these sorts of interactions with officers, not just in Calgary but around the province.”

If their agencies’ reports to the provincial government – or any agency’s street check data submitted to Madu’s department – suggests the new rules aren’t being followed, the minister said the powers of the Police Act would kick in, which outlines complaint resolution processes and officer discipline procedures.

Edmonton’s police chief and the president of the Alberta Association of Chiefs of Police said there were details to work out about “how we operationalize this,” but that he was looking forward to working with the government.

“I think Alberta is in a great position to lead this across our country.”

Alberta RCMP, whose federal mandate does not allow carding, issued a statement of support for the provincial government's move.

Mounties, too, practice street checks. However, officers are required to have an "articuable cause" for the stop.

DEFUNDING NOT ‘THE ANSWER’: MADU

The minister opened the conference by reiterating the government’s support for law enforcement amid calls to divert police funding to social services.

“You may have heard different buzz words lately, like ‘reallocating,’ but the goal is the same: pandering to the far-left ideology being pushed by radical activists,” Madu commented.

“Alberta’s government does not believe that the answer we are looking for comes from defunding the police. I have been as clear about that as I can be.”

However, he called Thursday’s announcement a symbol of his government’s dedication to restoring the relationship between police and the public.

“I’ve always believed that society can’t function without the rule of law, but in practical terms, the rule of law cannot exist if people do not trust the police.”