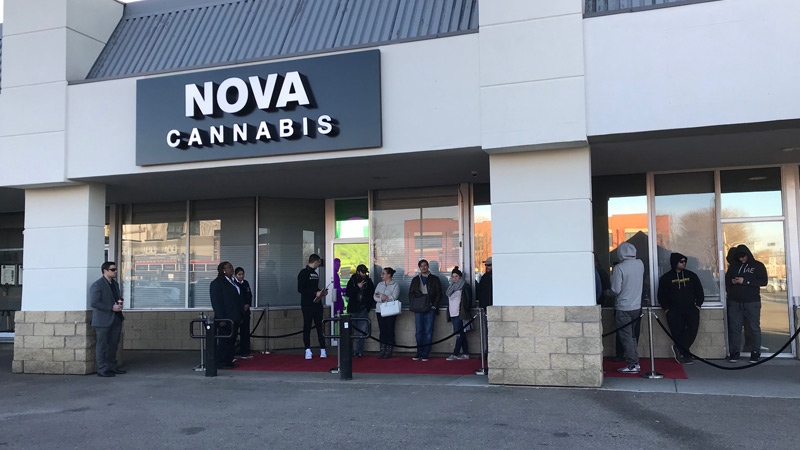 Alberta's cannabis regulator will allow pot shops to take down window coverings after a spate of robberies.

Alberta Gaming, Liquor and Cannabis Commission (AGLC) says it has removed portions of its retail cannabis store handbook that prohibit pot products from being visible from the exterior of shops.

In a letter sent to retailers today, the AGLC says the move was prompted by a "significant rise" in robberies at licensed pot retailers in recent months, in particular in the city of Calgary.

It says use of violence and weapons has occurred in some of the robberies and the AGLC was concerned for the safety of staff, customers and responding police officers.

The letter says its new policy ensures it is not inadvertently contributing to stores being targeted due to a lack of visibility and warned shops against using the change to replace window coverings with outward-facing promotions.

"Complying with this regulation meant that most licensed cannabis stores in the province have been forced to black out exterior window’s making them prime targets for criminal elements," said senior vice president of corporate and public affairs Omar Khan.

"Today’s news is a win for our employees safety, and our ability to continue pushing back against illicit market operators.”

This report by The Canadian Press was first published Aug. 9, 2022.

A U.S. court has sentenced a Canadian man to 20 years in prison for his role in a number of cyberattacks involving the ransomware NetWalker.

Alberta’s governing United Conservative Party is scheduled pick the province’s new premier Thursday, and political observers say its next step should be getting back on the same page as the rest of the province.

'Unheard of': Tens of thousands of salmon found dead in B.C. creek as drought conditions persist

B.C.'s sunny, dry weather is leading to major drought conditions in parts of the province, causing devastating impacts for some wildlife.