EDMONTON -- The opening of two immunization supercentres in Alberta's largest cities will help the province get "back to normal" by the fall, the premier expects.

On Monday, an estimated 1,500 people got their first COVID-19 shot at Edmonton's EXPO Centre-turned-vaccination "mega clinic."

The site is the largest in the province alongside Calgary's Telus Convention Centre. The expectation is staff at the clinics will be able to administer as many as 6,000 shots per day.

"It will allow us to ramp up," said Selene Tash, AHS' executive director of community health services. "So if we get surges of vaccine supply, it will give us a way to book people in."

"(I) feel good," said one Albertan who had just received their shot at the site. "It was a long process. I think it's just organized."

AHS acknowledged there is room for improvement after the first day.

With the opening of rapid flow-through centres around the province, including the two "mega clinics" in Alberta's largest cities, Premier Jason Kenney on Monday outlined how his government expects to see no or few COVID-19 measures by the fall.

NO MASKS BY FALL: TIMELINE

Currently, about 22 per cent of Alberta's population has "protective immunity," either from having contracted COVID-19 or being one of 865,500 people (or 16 per cent of the adult population) to have received at least one dose of vaccine.

With the opening of Phase 2C vaccination eligibility on Monday, as well as rapid flow clinics in Fort McMurray, Grande Prairie, Red Deer, Lethbridge and Medicine Hat, Kenney said the province is on pace to administer 300,000 doses each week.

And as Pfizer deliveries grow from 119,000 weekly doses to 225,000 in June – by which point, Alberta also hopes to have received Johnson & Johnson's single-shot product – provincial modelling predicts 64 per cent protective immunity by the end of that month.

"All of this relies on the supply of vaccines, and thankfully, it's finally increasing," he commented.

Kenney expects things to be "back to normal" mid-September at 72 per cent protective immunity.

Along the way, Kenney said the government plans to relax gathering limits, remove mask mandates, and eventually drop other restrictions. 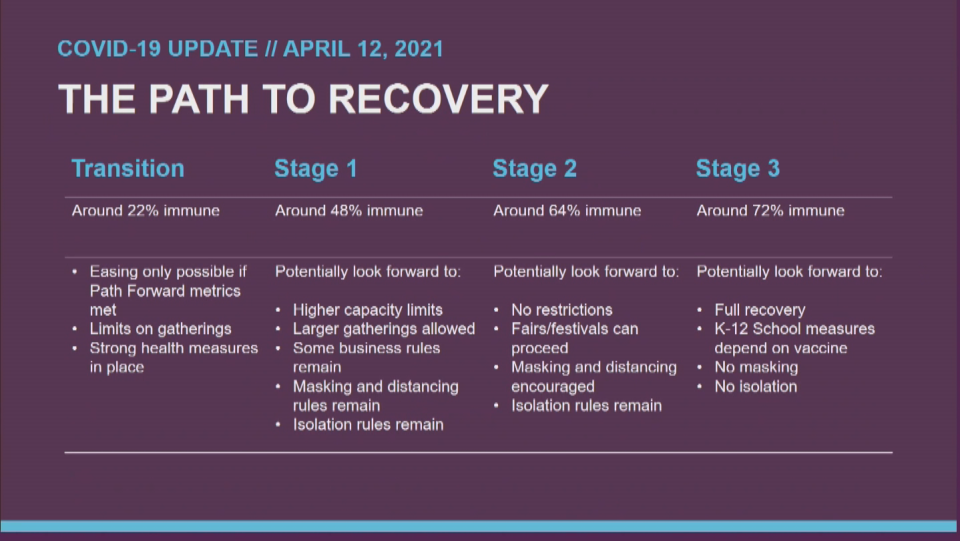 Dr. Lynora Saxinger called the immunity benchmarks reasonable, but noted that without knowing the impact of COVID-19 variants on those who are already vaccinated, Alberta's plan will have to be informed by what happens in other jurisdictions.

"A guess is a guess and a model is a model," the infectious diseases specialist told CTV News Edmonton.

"But we have to adjust to the realities on the ground and make sure we're not doing anything that's unduly risky for the population."

But Kenney stood by Alberta's backtracking to Step 1 of reopening – criticized by United Conservative supporters and members alike – while COVID-19 infections are on track to reach 2,000 daily cases and 20,000 total active cases.

"Once we can see that on a sustained basis, let's say for a period of a couple of weeks, then we can safely assume the vaccines are starting to win and then we can start moving to relaxing restrictions again," he told media on Monday.

Close to 165,000 Albertans have been fully immunized with two doses of COVID-19 vaccine.

Phase 2C's opening on Monday increased eligibility to some 240,000 health-care workers in the province like physicians, nurses and pharmacists and others providing direct patient care.

Kenney added, "If the alternative is blowing out our health-care system, mass cancellation of surgeries, a potential surge in preventable deaths, that is not morally acceptable…

"We have tried to take a balanced approach because of our Alberta belief in freedom and personal responsibility, but abstract political principles don't stop people from piling in intensive care units and threatening the capacity of our intensive care system."

He acknowledged his government's "path to recovery" is dependent on Albertans' willingness to be vaccinated, and expressed uncertainty about the uptake of AstraZeneca after health officials around the world advised its altered use. A new Angus Reid poll suggested roughly one in four Canadians who want a vaccine would reject the AstraZeneca product.

But those at the EXPO rapid clinic in Edmonton on Monday needed to make a decision.

"I'm relieved to get it, but I'm still a little nervous to get it," Bruce Baker commented.

JP Birtz said, "Any shot's a good shot, in my opinion. That's why I booked."

"We preferred to wait for the Moderna or the Pfizer," Louise Bush, who is waiting to make an appointment, added, "but given the variants now, I don't think we have a choice."

The clinic at the EXPO Centre is booking for AstraZeneca vaccinations for people between the ages of 55 and 64 into next week.