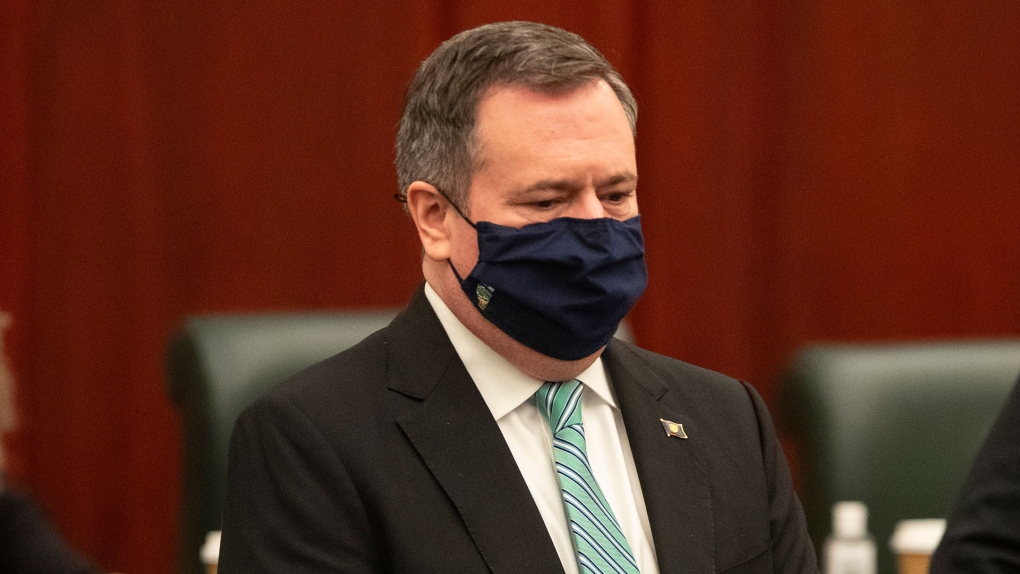 “I think we've seen many examples where the premier tries to bolster his own narrative.

“This is a trend of being dishonest, and I think it really does call into question what trust and confidence we can have in the things the premier says and does.”

Hoffman's comments came a day after Kenney's office confirmed the United Conservative premier “misspoke” when he used an anecdote about a super-spreader birthday party in Athabasca as a key driver of recent soaring COVID-19 rates in the town north of Edmonton.

Kenney used the party as an example of how super-spreaders are not necessarily driven by in-school transmission but by social gatherings.

An official with Alberta Health later said there was no data to suggest there had been an outbreak from a children's party in the community.

Athabasca Mayor Colleen Powell said the publicity the community of 13,000 people has received since the premier's comments is not the kind it wants.

“Why are you saying these things when you don't know?” Powell asked in an interview.

“I had a couple of people get in touch with me (asking) who held the party. News spreads like wildfire.”

Just over 100 people, including students and a dozen staff, from three different schools in Athabasca tested positive for COVID-19 and its variants.

“The premier was using the very real example to illustrate a point of the serious nature of COVID-19 and ease of transmission. As we've acknowledged, he misspoke on the specific location,” said Goodwin.

“All the NDP's ridiculous criticism shows is that they can only attack and criticize.”

Kenney has used anecdotes before to illustrate the rationale for COVID-19 policy decisions taken by his government.

In late November, he cited an impromptu encounter with a food court kiosk owner - a refugee from Venezuela - as an example of the devastating impacts that COVID-19 health restrictions can have on businesses.

“She came up to me, and she broke down in tears in front of me saying, 'Sir, I put my entire life savings as a refugee into this business. We're struggling to pay the bills. If you shut me down, I'm going to lose it all, everything, and I'll be in abject poverty,”' Kenney recounted at the time.

When reached later by a reporter, the owner, Carolina De La Torre, said Kenney accurately recounted her core concerns of balancing health and the economy. But she dismissed the colourful drama, saying she did not cry and did not approach him, rather it was Kenney who approached her.

Earlier this week, the premier came under criticism for challenging a radio host for saying Kenney once downplayed COVID-19 as the flu, telling the host he had never done so.

Hansard, the official record of house debate, recorded Kenney calling the virus “influenza” multiple times during debate on May 27, 2020.

In late February, just before Kenney's government released its first COVID-era budget, he announced that due to oil and gas revenues the revised forecast deficit for the 2020 fiscal year would be about $14 billion - a third lower than expected.

Treasury officials refused reporter requests to confirm the accuracy of that figure and, two days later, the budget revealed the 2020 deficit forecast was $20 billion.

This report by The Canadian Press was first published April 16, 2021.

- With files from Fakiha Baig in Edmonton