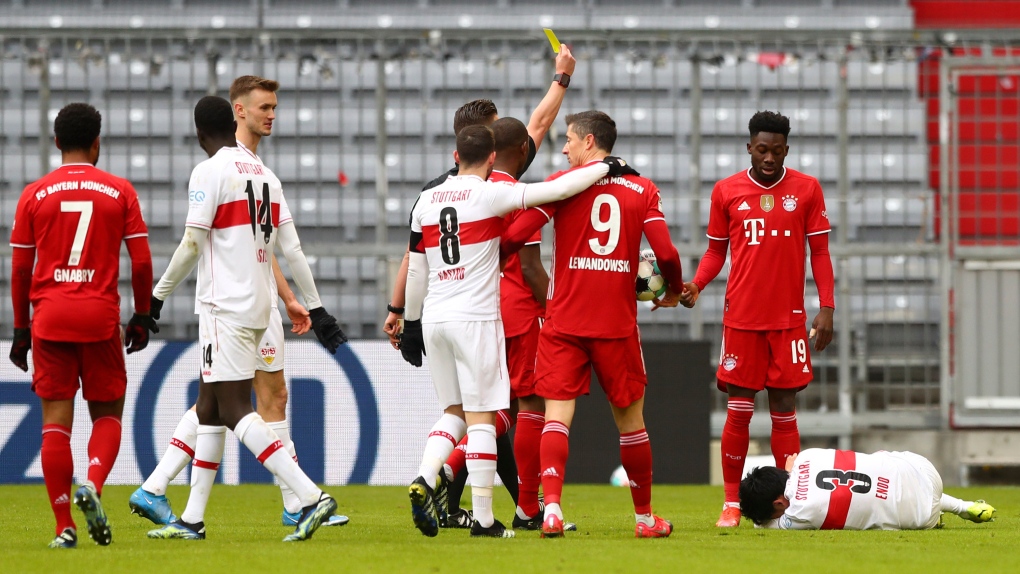 MUNICH -- Canadian Alphonso Davies has been suspended for two games in the wake of his red card in Bayern Munich's 4-0 win over VfB Stuttgart on Saturday.

The 20-year-old fullback from Edmonton was yellow-carded in the 11th minute after catching Wataru Endo's foot with a challenge at Allianz Arena. But that was upgraded to a red a minute later after referee Daniel Schlager reviewed the incident on a sideline monitor.

The incident occurred off a Davies throw-in. The Canadian got the ball to Robert Lewandowski, who sent it back with Endo in chase. Davies' first touch was poor and things got worse when he lunged to retrieve the ball, catching Endo's foot/ankle with his studs.

Davies will miss Bayern's top-of-the-table showdown with second-place RB Leipzig on April 3 and the game against FC Union Berlin on April 10 when the Bundesliga resumes after the March international break.

Davies is expected to be called by Canada for World Cup qualifiers against Bermuda and the Cayman Islands on Thursday and Sunday.

The Bermuda game is officially a Canada home game but will be played in Orlando due to pandemic-related travel restrictions. The Cayman Islands shifted the second match to Bradenton, Fla., for the same reason.