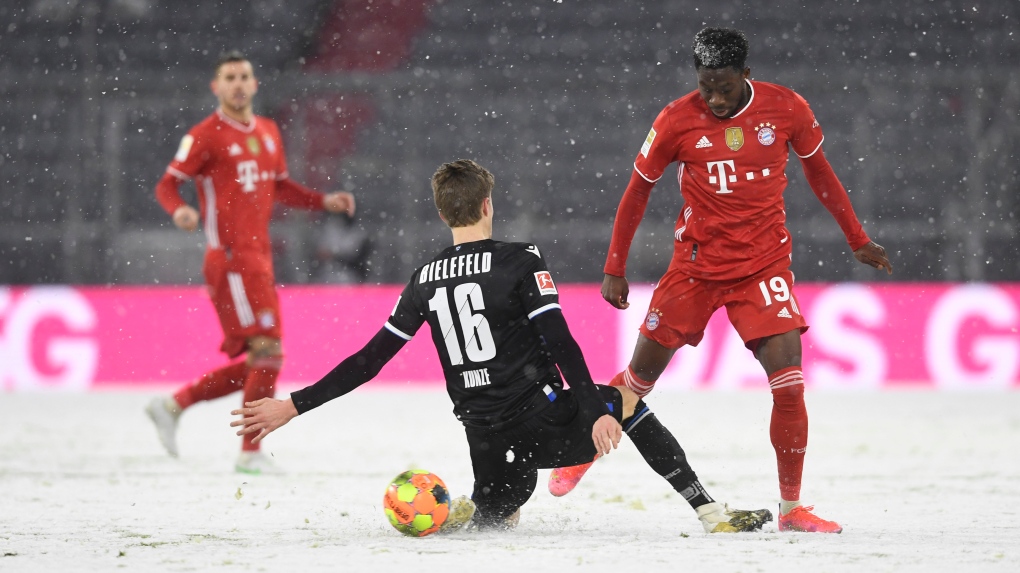 TORONTO -- Alphonso Davies has already made his mark on the soccer pitch. Now the young Bayern Munich star is expanding his reach.

The 20-year-old from Edmonton, currently in Florida with the Canadian national team, has been named a global goodwill ambassador for the UNHCR, the UN Refugee Agency.

Davies is the first footballer and first Canadian to take on the role.

“I believe my personal story can help make a difference in people's lives,” he told a virtual news conference featuring reporters from around the globe.

“I'll never forget where I come from,” he added. “It's part of my story and I'm happy to share it. It motivates me each and every day to be who I am, to reach out to people to tell them to help, to be aware of what the (refugee) situation is.

“I just want to be a role model to other refugees as well. For them to look at me, to give them hope and to say that if we believe in ourselves, we can make it.”

By now, Davies' story is well known in Canada. He was born in a refugee camp in Ghana to Liberian parents who fled the civil war in their home country.

“From what I remember, from what my parents told me, it was a tough road. It wasn't easy,” said Davies.

He was five when his family was accepted into a resettlement program that brought them to Canada, first to Windsor, Ont., and then Edmonton.

“For them it was amazing when they got accepted. I can only visualize the smile on their face, knowing they were going to go to a better life,” he added.

Fifteen years later, after making the move to German powerhouse Bayern Munich from the Vancouver Whitecaps, Davies is the face of Canadian men's soccer around the world.

Off the field, his infectious smile and fun-loving attitude have earned him a legion of followers --- 3.6 million each on Instagram and TikTok and 264,000-plus on Twitter.

He started supporting UNHCR in 2020 and, in February 2021, helped launch a Canadian government campaign, called Together for Learning, to promote access to quality education for refugees around the world.

Actor/director Angelina Jolie, a goodwill ambassador from 2001 to 2012. is now a special envoy for UNHCR, a global organization “dedicated to saving lives, protecting rights and building a better future for refugees, forcibly displaced communities and stateless people.”

UNHCR, which marks its 70th anniversary this year, works in more than 130 countries.

“Alphonso Davies personifies the power of sport and we are truly honoured to have him joining us,” Filippo Grandi, the United Nations High Commissioner for Refugees, said in a statement. “Sport has the incredible power to bring hope, to heal and to help shape the future for those forced to flee.

“In our work with refugees we see daily what uplifting difference sports can make in their lives.”

GROWING UP IN CANADA

Davies credited soccer for helping him find himself growing up in Canada.

“I was a shy guy in school but I think once I started playing football that's when I started making more and more friends,” he said. “It shows you who you are as well. Football is not just running around, playing the game. There's a lot of other factors involved.”

Davies was playing for the Edmonton Strikers when he caught the eye of the Whitecaps. He moved to Vancouver at 14 years old to pursue soccer.

“I'm glad it worked out,” he said.“ I promised my parents I'd stay the same, never change.”

His mother is proud of the journey.

“Because if I look back where we came from - refugee camp, no food, no clothes. And here we are today,” said Victoria Davies.

“I've got quite a small circle around me. I think everyone that I have in my circle, they want the best for me. The support around me is just amazing. And each and every one of them has my best interests in mind for me.”

Davies, who says he has experienced racism himself, said he hopes to help open eyes.

“We're all human beings. No matter where you come from, we can help each other as much as possible.”

This report by The Canadian Press was first published March 24, 2021