An Alberta transgender teen's family, friends and community have stepped up to provide support his provincial government does not.

In July, 17-year-old Luce Evans will undergo gender-affirming surgery commonly referred to as "top surgery," during which his breast tissue will be removed and shaped into a traditionally masculine, pectoral shape.

The appointment has been years in the making – and could have been delayed several more years if not for family, friends and community stepping up to help fund it privately.

While Alberta provides coverage for gender-affirming care like top surgery, people cannot join the months-sometimes-years-long waitlist until they are 18, unless it is deemed "medically necessary."

"I definitely couldn't have done all of this stuff by myself. In fact it was mostly my mom who did everything," Luce told CTV News Edmonton in an interview in May. At the time, he was still unsure if his hopes of getting surgery over the summer would be realized.

The teen, his family and his health-care provider want to draw attention to the inaccessibility of the medical system, whose weaknesses they say became more evident during the COVID-19 pandemic but which has long failed to provide timely and sufficient treatment to transgender Albertans.

Luce said, "It's really hard – almost impossible – to navigate the gender-affirming care that is available in this province."

SURGERY ABOUT MENTAL AND PHYSICAL HEALTH

"Having breasts – it doesn't feel like me," Luce tried to explain to CTV News Edmonton in May.

The discomfort started around age 13.

"Puberty sucks for everyone. But, like, it sucks in a different way when you don't know what's up and it's wrong, but you're not sure why because you don't have the words to figure it out."

He began learning about the spectrums of gender identity and sexuality through peers, eventually realizing: "I'm not a girl."

Still, the process took time, during which Luce's brewing confusion and discomfort grew obvious to his mom.

They call this period a depression.

"I've had people say that it's like wearing a shirt that's all scratchy and just doesn't fit. And it leads to something called gender dysphoria, where their body doesn't match how they see themselves," is how Luce's doctor, who specializes in gender-affirming care and who has treated patients as young as 11 and as old as 60, put it.

"This isn't just a benign tumour; this is something that affects their mental health as well as their physical sense of well-being."

Currently, Luce binds his chest as much as he is recommended – 10 hours a day with two-day breaks on weekends.

While it helps him look more like the person he feels he is, binding is physically painful, exhausting, and has negative health side effects: back pain, skin rashes and folds, shortness of breath.

Plus, it has prevented him from getting a job – with school, a job would require him to bind too many hours of the day – and participating in other regular activities, like swimming. Despite being a great swimmer, Heidi said, her son has hardly swam since puberty.

And, Luce noted, people still misgender him: "And as much as the binder helps, it doesn't completely fix it. Even when I bind, I'm not the flattest at all."

"It sucks. Because that's not me."

Rather than quantifying how long the waitlist for provincially covered gender-affirming surgery is, Alberta Health said timelines depend on the availability of surgeons.

In May, a doctor who Armstrong sends patients to for top surgery was only seeing referrals made at the end of 2020.

Luce's wait would be even longer, since as a minor he is not yet eligible to be put on the waitlist.

"When Luce turned 18, I could refer him to the doctor in Edmonton, and then he would be seen a year and a half after that. And once he was seen, he might have his surgery done a year after that," Armstrong said.

Twenty surgeons billed Alberta Health for top surgery in 2019-20. But Armstrong says he only knows of three who are accepting referrals on the other end of the COVID-19 pandemic.

Plastic surgeons can perform top surgery, too, Armstrong said, but also face demand for other kinds of referrals.

The COVID-19 pandemic also delayed all kinds of surgeries and revealed low supplies of health professionals. 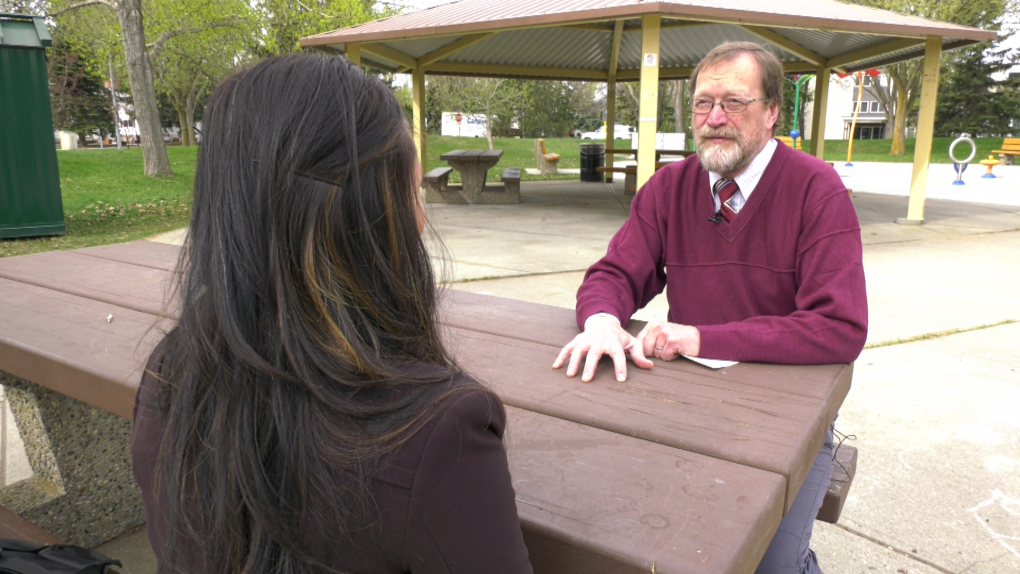 "When I went through medical school, it wasn't part of the curriculum. It wasn't mentioned. It was invisible," he told CTV News Edmonton.

Having Luce continue binding and being misgendered, or put off getting a job, only to face a three-year wait because of these circumstances is "just not an answer," Luce's mom said.

"We're privileged in the fact that we're here [in Canada], but we do need more. And it has to be easier for people to get it."

So the family explored private options, eventually finding a surgeon in Alberta who could get Luce on the operating table in July.

The procedure will cost $12,500. The family has fundraised more than $5,000 but knows the expense will largely come from their pockets.

"We're the only ones who'll be able to do this for him. So we're going to," Heidi said.

"He's going to be presenting to the world, even more, as the guy that he is."

'FREEDOM' ON THE HORIZON

All three – Luce, his mom, and his doctor – agree top surgery has the potential to improve both the teen's physical and mental health.

"It's been this way for my whole life," Luce told CTV News Edmonton.

"I'm 17… I think I can make decisions to help my wellbeing and I know what's right for me."

To his mom, there's no clearer evidence of that than the change she's seen in her son since he started testosterone in October.

"Every month seeing that wonderful improvement, him coming out of his depression, him living who he wants to be, his face when someone refers to him as 'he,'" Heidi said.

"I see a complete transformation. And I see freedom and happiness and confidence."

They want a more accessible medical system, with more robust resources and routes for youth who do not have as supportive a family as Luce.

"Denying someone this sort of care is just not letting them live how they need to live," Luce told CTV News Edmonton. "It's like denying them being them."

Simply, his mom just wants her kid comfortable and confident and happy.

"I want to see him swimming again."