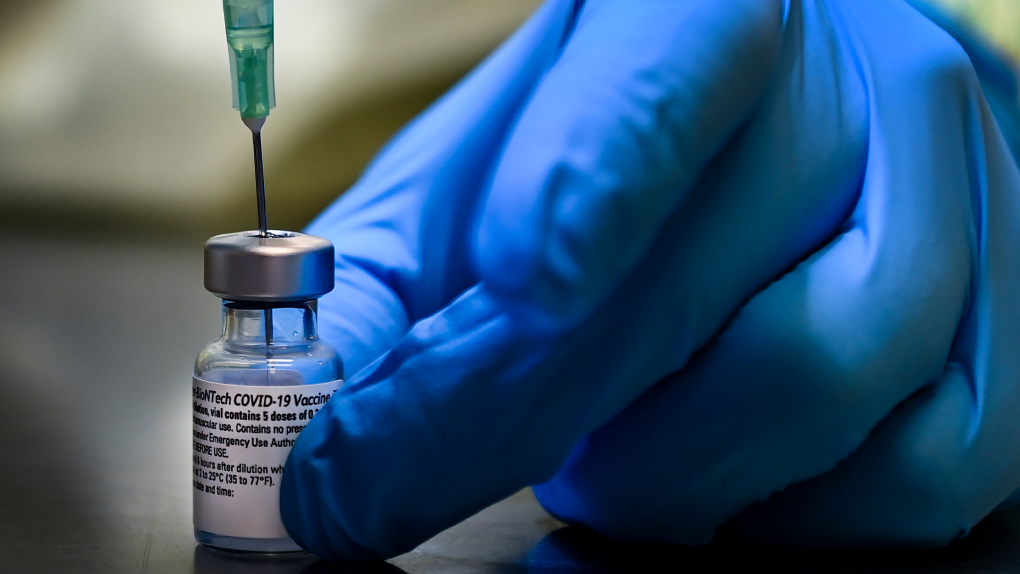 EDMONTON -- Health Canada's approval of a label change on Pfizer's BioNTech COVID-19 vaccine is frustrating, Alberta's health minister said Tuesday, but the province does have the syringe supply to extract a sixth dose most of the time.

Health Canada announced Tuesday morning it had decided it was possible to consistently and safely extract six full doses per vial after reviewing data from Pfizer.

To extract six doses, however, administrators need to use a low dead-volume syringe. The one-millilitre syringe keeps a smaller amount of liquid in the hub of the syringe after a shot is given, minimizing waste.

Alberta government and medical officials had urged Health Canada not to follow in the steps of the United States and Europe, which agreed to the change in January, saying administrators weren't able to extract a sixth dose every single time.

"It is frustrating. I think we made it clear to the federal government and Health Canada that everybody gets the best training, that everybody is using the right syringe, we're only going to get that sixth dose 75 per cent of the time, max," the province's health minister Tyler Shandro told media on Tuesday.

On Jan. 28, when the decision still sat before Health Canada, Alberta's chief medical officer of health urged the federal agency to "consider carefully" the fact a sixth dose was not guaranteed.

Dr. Deena Hinshaw said on Tuesday she had confidence Alberta would be able to administer six doses "much closer to 100 per cent" of the time with help from Health Canada and Alberta Health Services to procure more one-millilitre syringes.

She told reporters Alberta's previous statistic was based on the available syringes it had to use, including the typical three-millilitre syringe.

"With that particular technology ofthe low dead space small volume syringes, that will enable us to pull the sixth dose out more regularly. And again, those syringes were not in large supply previously, which impacted our ability to pull out that sixth dose in a consistent way."

While the change comes into effect immediately, Canada's shipments from Pfizer this week will still be calculated at five doses per vial.

Future shipment allocations will be adjusted to six doses per vial, meaning a shipment of what was originally counted as 336,000 doses the week of Feb. 15 is now being considered a shipment of around 400,000.

Shandro said, "The federal government has contracted out on the basis of doses, not vials, so it means that the provinces are going to end up not getting as many doses, I think."

Health Canada says it has been assured there is enough "overfill" in each vial to ensure six full doses can be extracted, but noted "the right technique and syringe" are needed.

Alberta's supplies of the one-millilitre syringe – of which there was a shortage at the end of January, necessitating the use of other syringes by vaccine administrators – have been restocked, Shandro and Alberta Health Services said on Tuesday.

"AHS has procured them. My understanding is there is no shortage in Alberta of those syringes and we ware going to have the syringes that we need," Shandro commented.

"We're going to continue to commit to Albertans we're going to get their vaccines to them as quickly as possible," Shandro said. "We are going to make sure we continue focusing on the smallest amount of waste as possible."

Alberta is expecting a shipment of 7,800 doses of Pfizer product this week.

More than 120,000 doses of COVID-19 vaccine had been administered in the province as of Feb. 7. That includes two doses given to some 29,000 Albertans who have been fully immunized.