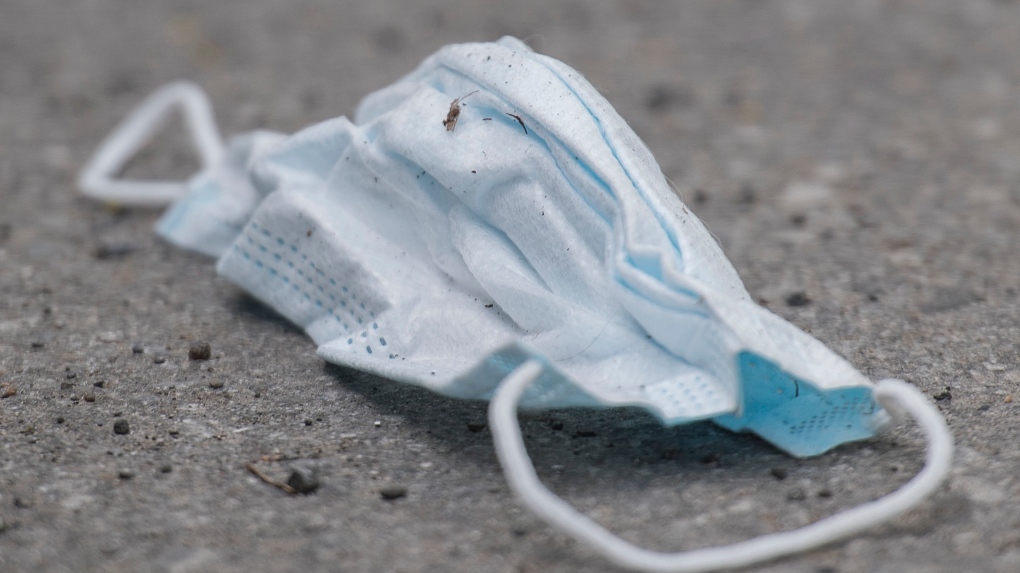 A discarded face mask is shown on a street next to a mobile COVID-19 testing clinic in Montreal, Sunday, May 17, 2020, as the COVID-19 pandemic continues in Canada and around the world. THE CANADIAN PRESS/Graham Hughes

A central Alberta high school student was asked to leave for refusing to wear a mask on the first day of classes Wednesday.

“Where a student refuses to wear a mask and where age-appropriate, the legal guardian will be asked to pick up the student from school,” Clearview Public Schools in Stettler told CTV News Edmonton.

“This process was followed involving a Grade 12 student yesterday.”

In a post on social media, a woman identifying herself as the teen’s mother said she was proud of his leadership and called rule followers sheep.

She also claimed school staff called Alberta Mounties to escort him off the property.

The school division said RCMP did not have any “direct involvement” with the graduating student.

“For the safety of our students and staff, we are asking for masks to be worn where the Chief Medical Officer has required this, including in common areas and hallways and for our students in Grade 4 to 12,” a statement from Clearview Public Schools reads.

It cites a public health order recently signed by the province’s top doctor, Deena Hinshaw, which made official her recommendations for Alberta schools. The rule is also referenced in the school division’s 2020 re-entry handbook.

“In the event that any person refuses to leave school property by the school principal in accordance with Education Act s.197(f) and Education Act s.256, the student (if age-appropriate) and/or the legal guardian would be informed that RCMP may be requested for supports.”

Those sections give principals the power to “maintain order and discipline” and mandate no one should disturb or interrupt school or act in a way that is “detrimental to the safe operations of a school.”

Mounties confirmed they received a request from the school, and that the responding officer did not interact with the student or their father.

In Alberta, mask use in Grades 4 through 12 in shared areas is mandatory and the government has provided two per student and staff.

In order for masks not to be used, such as in classrooms, other conditions must be met: students must be seated, distanced from each other as far as possible, and not facing each other.

The Clearview division called it regrettable the family had chosen social media as the platform for discussion,but told families it was working to follow the direction of Alberta Education and Dr. Hinshaw.

“Together and with understanding, it is our belief that we can all be successful.”

The family has not returned CTV News Edmonton’s request for an interview.