An Alberta fisher dropped his glasses in a 54 km2 lake. Luckily, he's a diver, too

EDMONTON -- Had any other ice fisher dropped their glasses to the bottom of Lac Ste. Anne this past season, it might have been good-bye.

But Terry Korz is a certified scuba and solo diver.

So when on a cold day in February Korz did something he never does: folded his glasses and hooked them on the clothing over his chest.

As the progressive lenses slipped through a hole in the ice ("Oh, s--t.") and away into the sandy depths of the body of water west of Edmonton – he faced a very specific question few others have the skill to answer: what are the chances of finding a pair of glasses at the bottom of a lake 54 square kilometres in size?

Figuring 50-50, Korz went home and returned to the fishing hole with an empty one-litre Coke bottle tied with six feet of string to a three-pound weight.

Down the weight went, after Korz's glasses.

He took a GPS reading, then went home for two-and-a-half months. 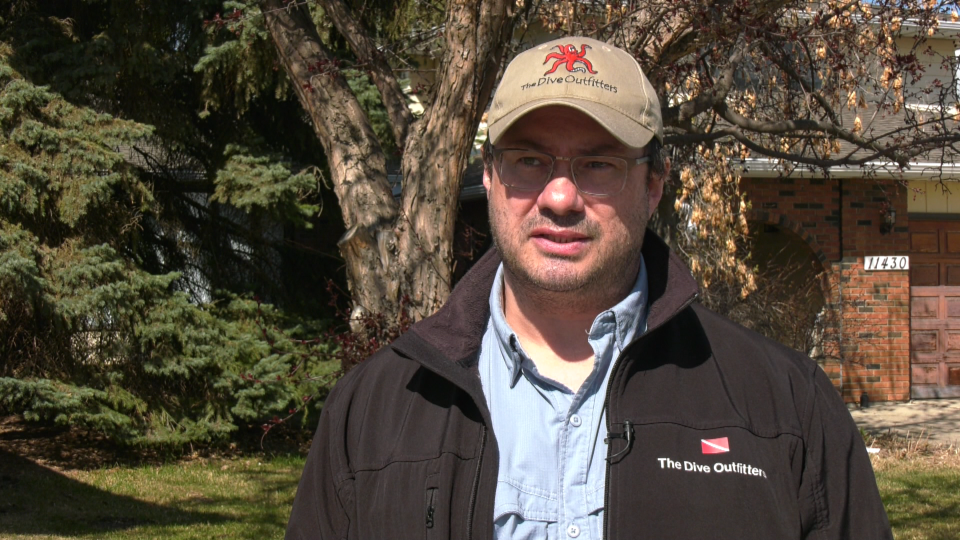 It wasn't an entirely ridiculous mission.

Korz is a divemaster at The Dive Outfitters in Edmonton. When his coworkers heard of the plan, they jumped at the opportunity (however goofy and stupid, one said) to go for a dive and help him out.

"I wish he had done it in the summer," dive partner Stuart Serediuk laughed. He found the three-or-four degree water "pretty crisp."

But, Korz promised his friends beer. And in May when the ice finally melted, they expected the Coke bottle would still be floating above Korz's plastic frames, limiting their search to an estimated radius of about three metres. From there, the divers would conduct a grid search in pairs. 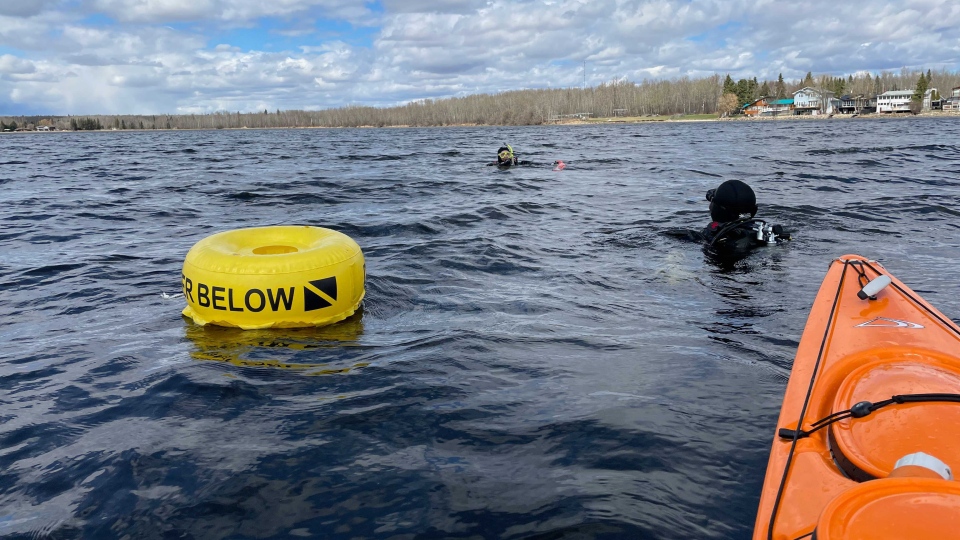 Plus, Lac Ste. Anne's maximum depth is nine metres, and the water where Korz's glasses took a dive of their own was much shallower – only about four and a half metres. For the group, who had hundreds and hundreds of hours of underwater experience combined, it wasn't a very technical dive.

The expedition started on Sunday at noon.

Each diver, carrying about 100 pounds of gear, trudged 100 metres through knee-high water and mud off the shore, and kayaked toward the anchored bottle. 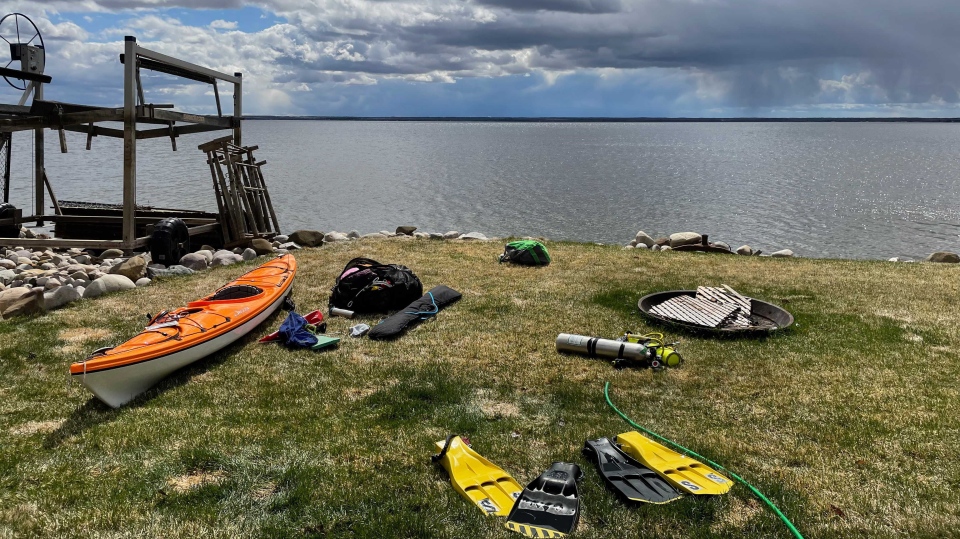 Almost immediately, the divers realized they had underestimated the challenge. Sunlight barely touched the bottom of the lake, and lights offered little help.

"Even though we were frog kicking and trying not to disturb the bottom, there was sediment everywhere. It was literally like diving in a cup of coffee. Literally," Korz said.

"When I first got in the water, my instincts told me I had a zero per cent chance of finding them."

Serediuk said: "Looking for glasses in a lake is like taking your glasses and going to a school yard and throwing them into the soccer field and then putting a blindfold on and getting on your hands and knees trying to find them," he told CTV News Edmonton.

Unable to see even a hand less than a metre from their face, the divers kept losing each other. They surfaced every 30 seconds or minute to reclaim their bearings, and headed back down. 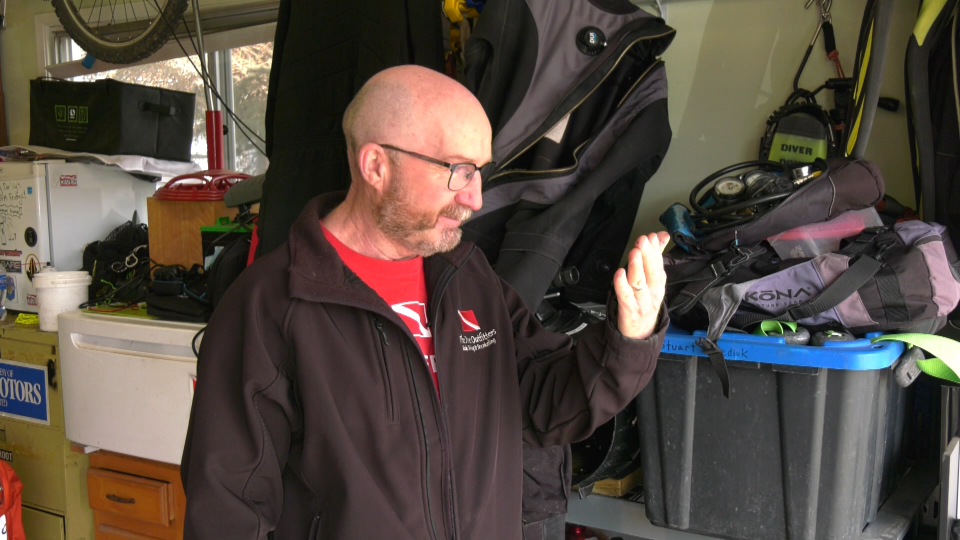 Eventually, another member of the search party found the Coke bottle, but by then the divers were cold and tired. It had taken 30 minutes just to find Korz's marker.

"Stuart and I went down I don’t know how many times and lost each other," he said.

"I can't feel my hands. My feet are getting cold. I've never actually been that cool before, diving in Alberta," Serediuk said. "And Terry's like, 'Just one more.'"

"I was at the last few breaths," Korz said, "and there they were as I turned to check one last time."

"Well s--t, are these actually my glasses? The first instinct was to try them on," he laughed.

When Korz rose to the surface, frames in hand, his friends could hardly believe it, too.

They've found a number of treasures while diving – other lost fishing gear, sunglasses, full bottles of wine, GoPros and cell phones – but generally the scuba divers leave search-and-recovery to the experts.

"I was hooting and hollering," Korz said.

He still owes his friends beer. But they're all satisfied at having had an early opportunity to dive.

"I could've said I lost an expensive – I don't know – pen. Or a cheap pen, never mind an expensive one," Korz commented.

"Any opportunity to go diving, we'll find an excuse."