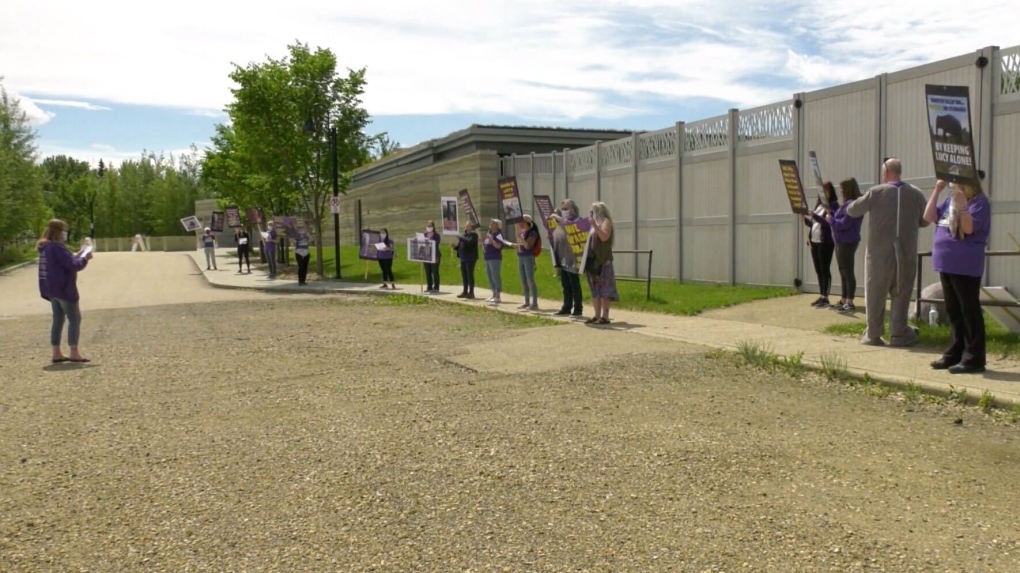 A group of protesters demonstrated outside the Edmonton Zoo as it reopened, calling for the zoo to retire the 45-year-old animal. June 15, 2020. (CTV News Edmonton)

EDMONTON -- A group of demonstrators stood outside the Edmonton Valley Zoo as it reopened Monday to lobby for the retirement of the zoo’s elephant, Lucy.

The group of about 30 people, who call themselves Lucy’s Edmonton Advocates Project (LEAP), chanted while holding signs as zoo-goers entered through the gates.

“Locked inside, alone and cold. At 45 she is not old,” was among the slogans that could be heard from LEAP members.

The zoo opened its gates to the public for the first time Monday after a three-month shutdown due to COVID-19.

LEAP is lobbying to have the Edmonton Valley Zoo’s Lucy the elephant moved to a wildlife sanctuary or an “appropriate” retirement home.

“We know that zoo elephants die very prematurely, because no zoo can provide enough space and enough exercise for them to maintain their health,” Mary-Ann Holm, president of LEAP, told CTV News Edmonton outside the zoo.

“So because of that Lucy’s suffering from numerous captivity-related ailments,” she said.

Late last year the Supreme Court of Canada declined to hear an appeal on Lucy's case from another animal rights group known as ZooCheck Canada.

ZooCheck Canada along with LEAP is among several animal rights groups trying to get Lucy the elephant moved from the Edmonton Valley Zoo.

The zoo has said in the past that Lucy suffers from a serious respiratory illness which experts have told them would result in the elephant's death if she were to be moved.

They've also said at 45 years, Lucy is aging and takes medication for arthritis as well.