Basketball fever is taking over Edmonton as the Toronto Raptors and the Utah Jazz will play a sold-out pre-season game at Rogers Place Sunday afternoon.

The match marks the first time a National Basketball Association (NBA) game will be played in Edmonton's Rogers Place. In 2008, the Raptors played the Denver Nuggets in a pre-season game at Rexall Place.

Leah MacNab, NBA in Canada managing director, said the pre-season contest aims to bring basketball to more Canadians outside of the Toronto area.

"We know that we have tons of fans in all corners of the country," MacNab said. "(Coming to Edmonton is) an investment in our fans.

For the past 10 years, the NBA Canada Series has brought NBA action to cities across Canada. On Oct. 14, the Raptors will travel to Montreal to face the Boston Celtics. Vancouver, Winnipeg, Montreal, Ottawa, and Calgary have all hosted previous NBA in Canada series contests.

"Our fans make our league happen," MacNab added. "We are grateful to be able to actually enjoy the game with them and celebrate with them."

MacNab says these special matches also help inspire youth to get involved in the sport.

"It's something we think, that we could find the next NBA or WNBA (Women's National Basketball Association) player here in Edmonton."

Ahead of the anticipated event, some local youth got to test out the newly installed court at Rogers Place and learn from some of basketball's finest.

The NBA has officially arrived in EDMONTON for #NBACanadaSeries presented by @Bell! 🇨🇦

After completing drills and meeting Raptors superfan Nav Bhatia and two-time NBA All-Star Carlos Boozer, the group were surprised to free tickets to the Raptors game.

"We knew the kids were going to be excited, and (it would) be a wonderful memory they could keep for a lifetime," MacNab said. 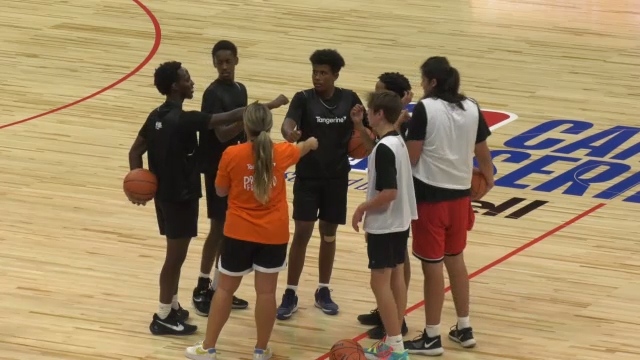 "It means a lot," Gateretse said. "I've been a fan of the Raptors for a long time. It's always been a dream of mine to watch one of their games."

"(I'm) just excited to wake up tomorrow and come here." 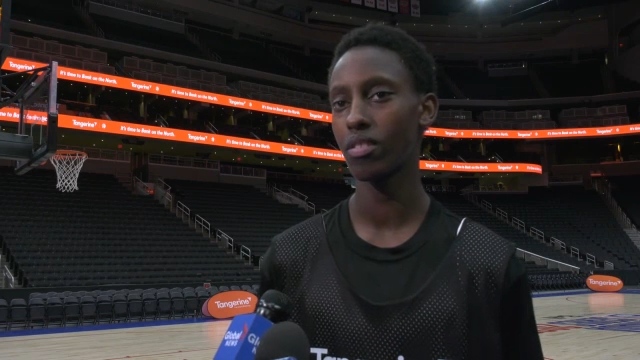 Raptors superfan Owen Gateretse took part in the basketball clinic on Saturday and will get to see the Raptors play at Rogers Place (CTV News Edmonton/Marek Tkach).

Pamela Rutto, 17, a student at St. Francis Xavier High School, said it was surreal to complete drills on the same court the Raptors will play on Sunday.

"I've loved basketball for years," Rutto added. "I'm so excited. I've actually never been to an NBA game before, so I am so hyped for this. I cannot wait."

#IceDistrict is ready to welcome the @raptors and @utahjazz for the @NBACanada Series game tomorrow and the @jwmarriottedm is looking amazing!! pic.twitter.com/wk8Gp3aflO

For Boozer, inspiring the next generation of basketball talent at the clinic reminded him of his first experiences trying out the game.

"It took me back to when I went to my first game," he said, adding how he was 16 when he enjoyed taking in his first in-person NBA game.

"Some of these kids aren't even 16 yet, and they get to see their first game," Boozer added.

The sell-out crowd shows the appetite for the NBA is growing, Boozer says.

"Canada is known for hockey," he said. "It'd be great to see another NBA team possibly in Canada down the road in the future.

"It's great that they are trying to reign in fans from across the country," he added. "They clearly want to watch basketball here in Edmonton."

Doors open at Rogers Place at 3 p.m. Sunday, and tip-off is scheduled for 4 p.m.

The NBA in Canada Series is presented by Bell. CTV News, a division of Bell Media, is owned by Bell.

A powerful 7.8 magnitude earthquake rocked wide swaths of Turkiye and neighbouring Syria on Monday, killing more than 2,500 people and injuring thousands more as it toppled thousands of buildings and trapped residents under mounds of rubble.

Canada stood ready to provide help in the aftermath of a deadly 7.8 magnitude earthquake that rocked Turkiye and Syria, Prime Minister Justin Trudeau said Monday, with over 2,300 people reported dead.

As preparations are underway for the anticipated health-care 'working meeting' between Prime Minister Justin Trudeau and Canada's premiers on Tuesday, new details are emerging about what some provinces are expecting.

Full snow moon considered 'micromoon' because of distance from Earth

February's full snow moon will light up the sky over the next two nights, with the spectacle reaching full illumination on Sunday morning. But this year’s full moon will be smaller than those of recent years. It’s called a “micromoon.”

A former Liberal MP is seeking the dismissal of two criminal charges connected to his time in office. Raj Grewal's lawyer argues that prosecutors have not presented enough evidence to find him guilty of the two breach of trust charges, and the Crown has failed to establish essential elements required for such a finding.

The tech industry started the year with a wave of job cuts, around 50,000 in January alone, and there doesn't appear to be any let up this month. Here's a look at some of the companies that have announced layoffs so far.

The lawyer representing a former medical student accused of murder says her client will testify that he shot another student in self-defence when a drug deal in Halifax turned violent.

Why was the Turkiye-Syria earthquake so bad?

The magnitude 7.8 earthquake that struck Turkiye and Syria on Monday is likely to be one of the deadliest this decade, seismologists said, with a more than 100 km rupture between the Anatolian and Arabian plates.