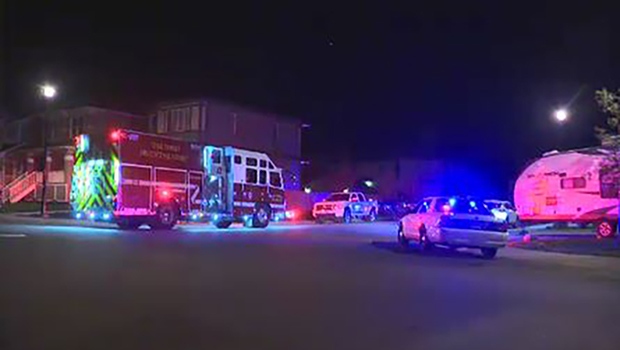 The Alberta Serious Incident Response Team (ASIRT) has found an Edmonton police officer “acted reasonably” in an arrest that left a 25-year-old woman with serious injuries.

On May 28, 2017, Edmonton police spotted a stolen Ford Expedition on Yellowhead Trail near Winterburn Road.

According to a release from ASIRT, there were four people inside the vehicle, including the 25-year-old woman.

“EPS members were unsuccessful at boxing in the vehicle, which led the driver to flee the scene with all occupants still inside,” the release read.

ASIRT said during pursuit, the stolen vehicle traveled at excessive speeds, ran red lights, and drove in the oncoming lanes of traffic. The driver pulled into a parking lot on Stony Plain Road and 178 Street as Air 1 watched from above.

The four people ditched the Expedition and got into another stolen vehicle and fled.

“During the search of the Expedition, the officer found a sawed-off .410 shotgun,” the release stated.

The high-speed pursuit continued into Leduc where officers managed to stop the vehicle in a residential area using a type of spike belt, and the four suspects took off on foot.

One male was found hiding under a holiday trailer.

“He failed to surrender and police used a conducted energy weapon (CEW) to gain control and complete the arrest. No significant injuries were sustained by the man,” the release stated.

An EPS officer and his police service dog arrived to help track the other suspects.

The 25-year-old woman was then found hiding in the drive train/wheel well area of another truck. ASIRT said the officer told the woman to come out of hiding or he would send in the dog and the dog “will bite” them.

“The officer ultimately stated ‘OK, that’s it, I am going to send the dog.’ When that announcement received no response, the officer released the dog to go under the vehicle. The dog emerged seconds later dragging a screaming woman by the right side of the head and face. It was only at this stage that officers knew they were dealing with a woman,” the release said.

The dog was commanded to release the woman, which it did.

“The woman was bleeding profusely and her right hear was severed. Officers provided medical aid until Emergency Medical Services (EMS) arrived on scene and transported her to hospital. Unfortunately, doctors were unable to reattach her ear,” the release continued.

ASIRT found it would have been an “unreasonable risk to officer safety” to go under the truck themselves.

“It cannot be said that the officer simply resorted to the use of the dog to be expedient or to exact a measure of punishment. The same officer with his police service dog located the remaining two men hiding in two different locations and was able to convince them to surrender and cooperate,” the release said.

“They were given similar directions as the young woman, with the only difference being their compliance with directions.”

ASIRT said based on the evidence the officer acted in the lawful execution of his duties and was entitled to use as much force as was reasonably necessary.

“While the consequences were terrible, that does not change the lawfulness of the officer’s actions. As such, there are no reasonable grounds, nor reasonable suspicion, to believe that the officer committed a criminal offence and he will not be charged,” the release stated.