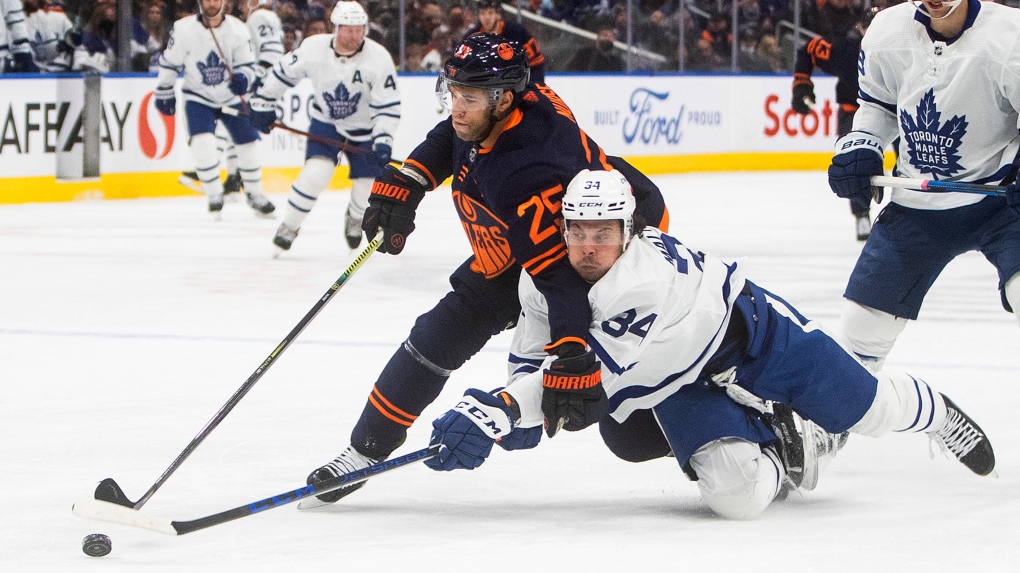 Auston Matthews is creeping up on the NHL's goal lead.

Matthews scored a pair of goals as the Toronto Maple Leafs won their second game in a row, defeating the plummeting Edmonton Oilers 5-1 on Tuesday.

The Toronto forward has 13 goals in his last 10 games for 20 on the season and is now just three back of Edmonton's Leon Draisaitl for tops in the league in that category.

“It was a pretty solid game other than maybe the second period,” Matthews said. “I thought the first 10 minutes there they really took control of the game and we were just a little bit back on our heels. But (goalie Jack Campbell) made some unbelievable saves, not only in that period, but the whole game and we just kind of weathered the storm and then we were able to give ourselves a bit of a cushion in the third.”

Wayne Simmonds, TJ Brodie and Morgan Rielly also scored for the Maple Leafs (20-8-2), who improved to 8-4-1 on the road.

“I thought our guys did a really good job of capitalizing on our chances, making good on them and I thought we played a really disciplined game defensively,” said Toronto head coach Sheldon Keefe. “We responded well when we needed to. It's not a perfect game by any means but it's a good effort by our team against a team on the other side that's pushing hard and looking for a win. We did a lot tonight to make sure we made it difficult for them.”

Colton Sceviour responded for the Oilers (16-11-0) who have lost six games in a row, including all five games of their current homestand.

“It is obviously very frustrating,” Sceviour said. “It is one of those stretches that I don't remember being in in pro hockey, being that snake-bitten. At some point we are going to get out of this, and the only way is by working and playing the right way.”

John Tavares fished the puck out of a scramble in front of the net and got it across to Matthews, who sent a shot past Oilers goalie Mikko Koskinen with 35 seconds to go in the opening frame. The power-play goal extended Matthews' point streak to 10 games.

The Oilers have allowed the first goal of the game in 15 of their last 20 games, winning all five of the games where they scored first.

Toronto added to its lead nine minutes into the second period as Simmonds battled hard in front to sweep home a rebound.

Brodie made it 3-0 with five minutes left in the middle frame when his shot deflected off a defender and into the net, his first goal of the season.

Edmonton finally got on the board with a goal on its 32nd shot five-and-a-half minutes into the third when a bad bounce ended up on Sceviour's stick and behind Toronto starter Campbell for his first of the year.

Just over a minute later, however, the Leafs responded as Rielly beat Koskinen high to the blocker side.

Toronto padded its lead with three minutes left as Matthews blasted a shot from the slot for his 20th of the season.

Both teams return to action on Thursday as the Oilers close out their six-game homestand against the Columbus Blue Jackets, while the Maple Leafs play the second game of a four-game trip in Calgary against the Flames.

This report by The Canadian Press was first published Dec. 14, 2021.