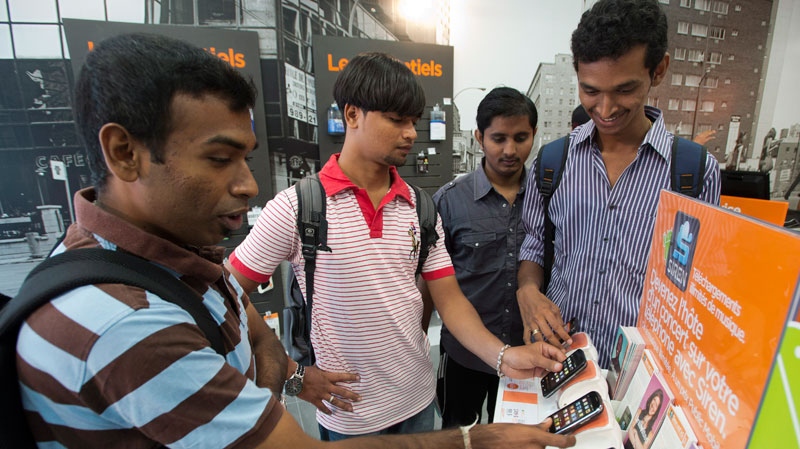 MONTREAL -- Students are hooking up more and more with wireless companies in the back-to-school season, making this period a key time for buying cellphones.

New smartphones are usually launched at this time along with plenty of deals as back-to-school starts to rival the holiday shopping season for cellphone sales, say analysts and wireless providers.

Computer science student Varun Vrayen was out this week cellphone shopping with his friends, all newly arrived from India to attend university. They were looking for unlimited calling to stay in touch with each other and call back home.

"If we need some help or if we're lost in the city, we'll need to talk," said 23-year-old Vrayen, who was in Public Mobile store in downtown Montreal.

Public Mobile launched just more than two years ago in Ontario and Quebec, offering cellphones with no contract and no credit checks.

Telecom analyst Troy Crandall said there's no one more "value oriented" than students and the new wireless providers have an opportunity to appeal directly to them.

"To me, it seems like prime time for these guys to get in and start going after these customers that are all looking for good value," said Crandall of MacDougall, MacDougall & MacTier.

Other new wireless providers that have launched in the last several years are Wind Mobile, Mobilicity and Quebecor's Videotron (TSX:QBR.B).

If students don't want the "hottest phones out there," there are still choices that offer good value, Crandall said.

But handset manufacturers are using this time to launch new smartphones, Crandall added.

Apple is expected to launch a new version of its iPhone in late September.

Samsung has unveiled a smartphone based on Microsoft's new Windows Phone 8 operating system, and it just introduced a new version of the Galaxy Note smartphone-tablet hybrid device.

"It used to be that the Christmas holiday season was the biggest, but the shift is moving into the Q3 back-to-school season. You're seeing that reflected in the launches of handsets," Crandall said.

"There are as many or more smartphones bought by customers in the back-to-school time frame than at Christmas," Fuller said.

"Students think of September as the start of their year," he said. "You get a lot of students just naturally making technology buys in the back-to-school period."

Fuller said Telus limits the number of promotions it offers in this period to avoid confusion, adding he believes the wireless industry "snows the consumer with 10,000 promotions," too many for sales staff and consumers to digest.

Crandall said the back-to-school season continues right into early October and the benefits of it can spill into wireless companies' fourth-quarter financial results, which include holiday shopping.

Pascal Picard, manager of sales and distribution at Public Mobile in Quebec, said the back-to-school season lasts longer than the holiday shopping period.

"I still believe Christmas is the biggest period for us but it's so condensed," Picard said. "Back-to-school is busy over a longer period."

For Vrayen and his friends, everything is still new in Canada and their cellphones are indispensable to stay in touch with family, friends and girlfriends.