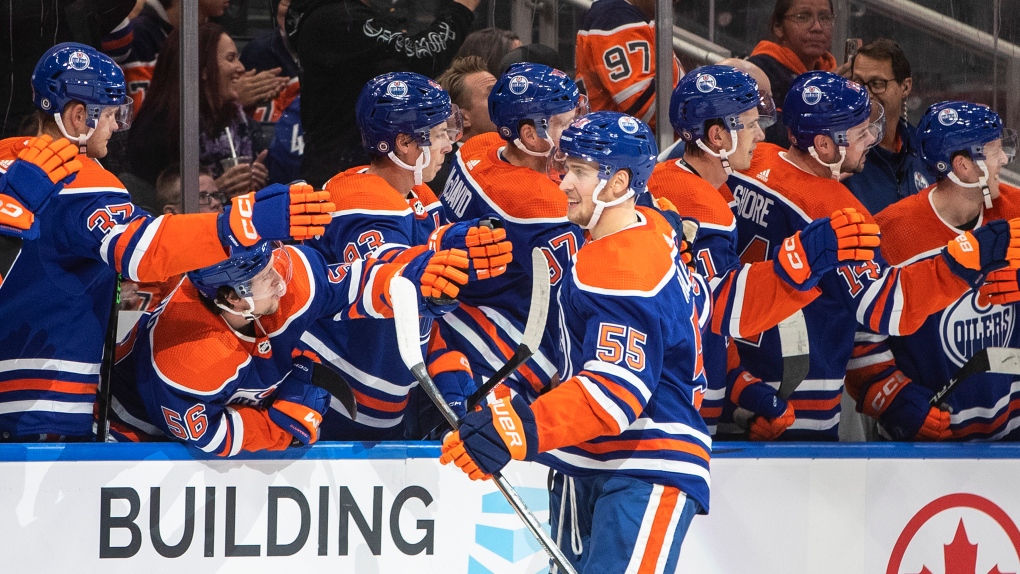 Dylan Holloway skated on a line with Connor McDavid Wednesday morning ahead of the Edmonton Oilers' pre-season rematch against the Vancouver Canucks.

The 21-year-old rookie took a huge step in proving he belongs in the league, and possibly on one of the Oilers top lines, Monday night when he scored three times and added an assist in a 7-2 win over the Canucks.

"Heck of a game," head coach Jay Woodcroft said of the rookie's effort.

The first-round pick in 2020 is among the NHL leaders in pre-season scoring with six points in four games.

"He's big, he's strong, he has a real good skill set," Woodcroft said, while reminding people it's still the pre-season where rosters full of NHL players are rare.

Holloway has outscored everyone on the team so far including forwards Warren Foegele, Kailer Yamamoto and Jesse Puljujarvi, all of whom are expected to battle each other for ice time.

Jesse Puljujarvi skated on the second line with Ryan Nugent-Hopkins, according to Tony Brar with Oilers TV, while Yamamoto and Foegele were not expected to play.

"I believe Jesse Puljujarvi deserves a chance in these last few games to play in a significant role, find his confidence, and answer the challenge that has been laid down by Holloway and Foegele (who scored twice against Vancouver)," Ryan Rishaug told Dustin Nielsen during his Wednesday show on TSN 1260.

Rishaug, TSN bureau chief in Edmonton, said Puljujarvi has had a "fairly underwhelming" training camp so far and there's a chance he starts the year on the fourth line.

Trade rumours have surrounded the Finnish forward for months. His ice time and scoring productivity fell in the second half of last season and it has been reported that he asked for a trade out of Edmonton for a second time.

At the start of camp, general manager Ken Holland said Puljujarvi is in a "battle" for ice time, and that he wanted to see his team in pre-season before making any roster moves. Foegele and Tyson Barrie have also been named in trade rumours by NHL insiders.

"The overall encouraging sign is that you have a battle here with NHL guys. Gone are the days where 21 and 22-year-olds were just granted spots on the roster," TSN 1260's Connor Halley said, referring to a long playoff drought that some Oilers fans call the "decade of darkness."

Several NHL insiders have speculated that the Oilers haven't traded Puljujarvi yet because Holland doesn't like the offers he's received for the former fourth-overall pick. But Holloway's emergence might make the GM and fans feel better about making a move now, Halley believes.

"I think the problem with trading Puljujarvi is you're probably going to lose that trade…What Dylan Holloway has done, you can feel a little better about potentially losing a trade, but it's still gotta be a tough pill to swallow," Halley said,

The Oilers play the Canucks in Abbotsford at 8 p.m. MT.