EDMONTON -- It was 1984 or 1985. The Oilers were Stanley Cup champs and the Jong family inherited a Queen Victoria Agave plant from a friend.

For the next 35 years, the plant sat in the Jong’s living room or on their deck, barely changing at all.

And then in early October, without any notice at all, it started to growing a stalk.

“It was really amazing and so I took a picture. And then the next day I took another picture and it had grown another four inches,” Priscille Jong told CTV News Edmonton.

After decades of standing shorter than two feet, the stalk shot the plant to a height of eight feet in just two weeks, fast approaching the second storey ceiling in the Jongs' living room.

The Jongs researched the developments online and believe their agave stalk will reach 10-15 feet before it blooms.

“The sad thing is... it’s going to die. Because when it blooms like this it puts all of its energy into growing the stalk and the bloom,” Jong said.

For Jong and her husband the journey has been exciting but bittersweet, knowing their time with their cherished plant is nearing an end. Their agave has been with them since before their three sons were born.

“They (the family plants) are our babies now that the kids are gone,” Jong said.

The Jongs measure the plant every morning. Coworkers, family members—even a University of Alberta botany class—have eagerly been receiving updates.

Jong is not sure when her agave will bloom, or when it will die. But she said her husband will probably find another “weird” plant to replace it. 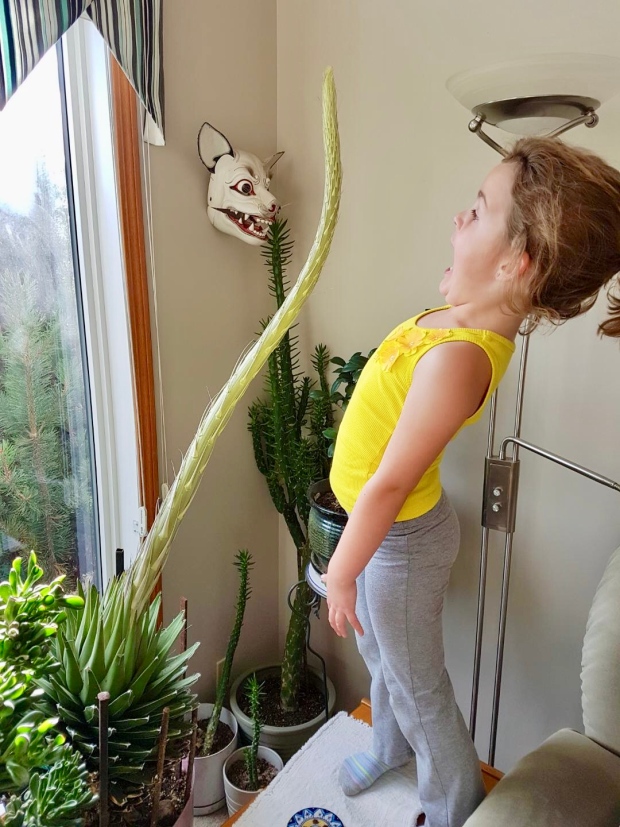 The Jongs' six-year-old granddaughter admires the agave stalk, which had grown to more than eight feet tall by Oct. 17. (Supplied)