After recent closures, unions representing health-care staff said doctors and nurses are exhausted from the pandemic, and the Opposition NDP worried Albertans would not receive appropriate care.

On Friday, AHS assured the public nearly 99 per cent of its 8,513 acute care beds and 1,221 emergency departments are open, and the few closures are only temporary as staff take time off.

Gordon went on to say bed closures are not uncommon, especially during the summer when staffing levels are "historically a little bit lower."

On average, AHS has a six per cent vacancy rate in June – a number that has slightly increased to 6.8 per cent in 2021. 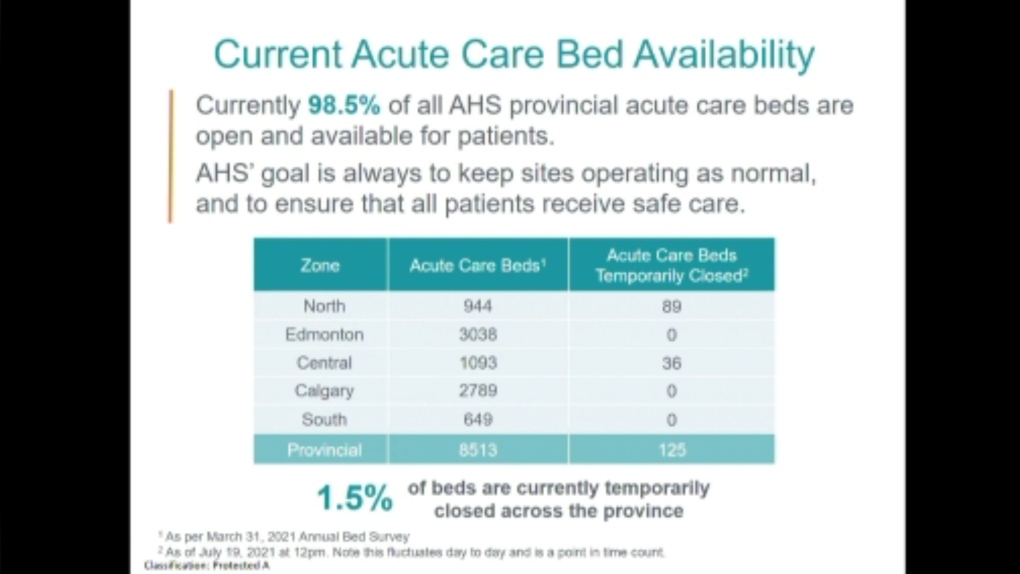 "It's a challenge for us but it's not a new challenge," Gordon said. "There is, however, a new challenge this year. The impact of the pandemic on our staff and positions is new…Many of them have been doing far more than their usual hours in the past 16 months. They need and deserve a break. They're less able to work extra shifts than they would have been a year ago."

As many as 20 hospitals and health facilities have reduced service in some capacity in the past six months — most of them in rural areas. The north zone currently has the most acute care bed closures, with 89 out of 944 beds in the area not in use.

"The reality is we've seen emergency room closures that were not planned in communities across Alberta, primarily rural communities, and quite frankly, I think, the rural citizens of Alberta are tired of being gaslit by a government that's suggesting that it’s just normal for them to tolerate episodic and unreliable service in some of their community hospitals. So we know it's a real problem," NDP Leader Rachel Notley said.

When asked why staff have been more vocal about shortages this year if closures are a routine, seasonal issue, AHS president and CEO Dr. Verna Yiu also referenced the stresses of the COVID-19 pandemic.

"It's been a really, really rough 16+ months and everyone is very, very tired," Yiu told reporters. "Nobody's had much vacation and at the end of the day, our staff advocate because they really care about patients. We're very supportive of all that they do, we're very grateful of all that they do and it is their purview to share their views, but understanding the lens of the pandemic fatigue, which is real."

With files from Carlyle Fiset