'Bit of an operational task': Water pooling due to windrow stacking adds to city crew workload

Water pooling on residential roads due to blocked drains is an emerging concern the City of Edmonton says it is tackling.

At a media update on Monday, Andrew Grant, the city's supervisor of field operations, explained that crews were dealing with several residential areas where stacked windrows have inadvertently blocked drainage access, causing pooling water that can create icy conditions.

"With the warmer weather, catch basins have become a bit of an operational task to release the water that we see ponding," Grant said.

"This is something that we usually deal with in the spring," he added. "It's just a constant battle with Mother Nature this year."

"It's nothing new to us when it comes to the ponding of water around those catch basins," he added, "(it's just) not something we usually see this time of year."

Mitch Waters had to clear out some of the windrow covering the catch basin near his home to help drain pooling water in front of his driveway — on his day off nonetheless.

"There's been some large windrows pilling up," Waters said, adding that the city has done a good job of making sure driveways remain accessible.

"(They) just need to make sure that we keep those water mains clear so that we can get some good runoff," he said. 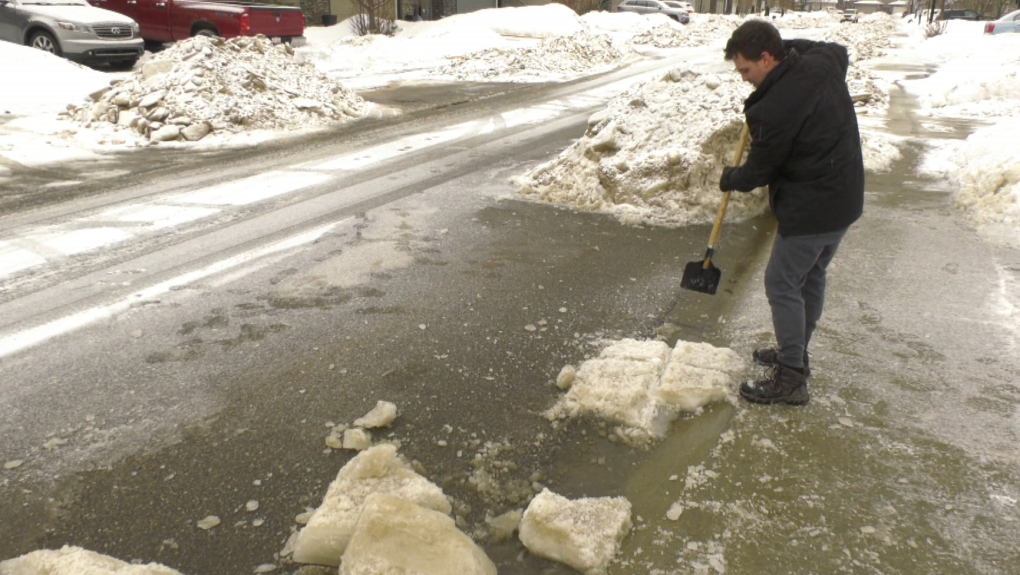 Mitch Waters decided to take matters into his own hands and chip away at some of the windrows blocking a catch basin near his home (CTV News Edmonton/Dave Mitchell).

Grant said city crews are working with EPCOR to identify and respond to neighbourhoods experiencing flooding due to covered drains.

The city reinforced that it does not do windrow removal along residential streets. Crews are undertaking a pilot project testing windrow removal in the Griesbach area to help the city assess the process and cost of it.

Anyone experiencing flooding due to ponding is asked to report it to 311 Grant said so city crews and EPCOR can respond. The level of flooding determines the priority of response and whether there is property damage or potential for it.

"When we see these fluctuating temperatures, this is one of the complications that we have, especially in relation to the windrows that we are seeing," he added.

"We will continue to work throughout the city to expose and open up some of those catch basins."

To see the location of catch basins in your area, visit the City of Edmonton Open Data Portal.