Nelson Rego is a rec league goaltender in Edmonton — and he's also blind.

Rego lost his sight in 2001 Specialists expected the decline to be gradual. But one morning, shortly after his diagnosis, he woke up and his sight was gone.

“It was a difficult moment,” he recalled.

While it took a few years to adjust, Rego said it never held him back from pursuing his goals.

“I’ve got a beautiful wife and child so I can’t say that I would take that all back because I wouldn’t have what I have now if I didn’t go through that circumstance,” he said.

John Hunter, a rec hockey player in Edmonton, met Rego online when he reached out to inquire about gear modifications and a chest protector.

A few weeks later, Hunter said he was injured before one of their games and put out a call on Facebook for a substitute goalie. He got no bites, at first…

“Nelson calls me, and he kind of starts out with, ‘Hey, how's the chest protector going? By the way, I’m not sure if this is a good idea or not but I saw your post for a goalie sub for your league game tonight. What do you think about me playing?’”

Hunter ran the idea past the team and everyone was “all in” on giving Rego a shot.

“He could be the first blind goalie anywhere to play a league game,” he said. “For sure here in Edmonton nobody 100 per cent blind has ever played a league game.”

“We didn’t tell the refs until puck drop,” he laughed. 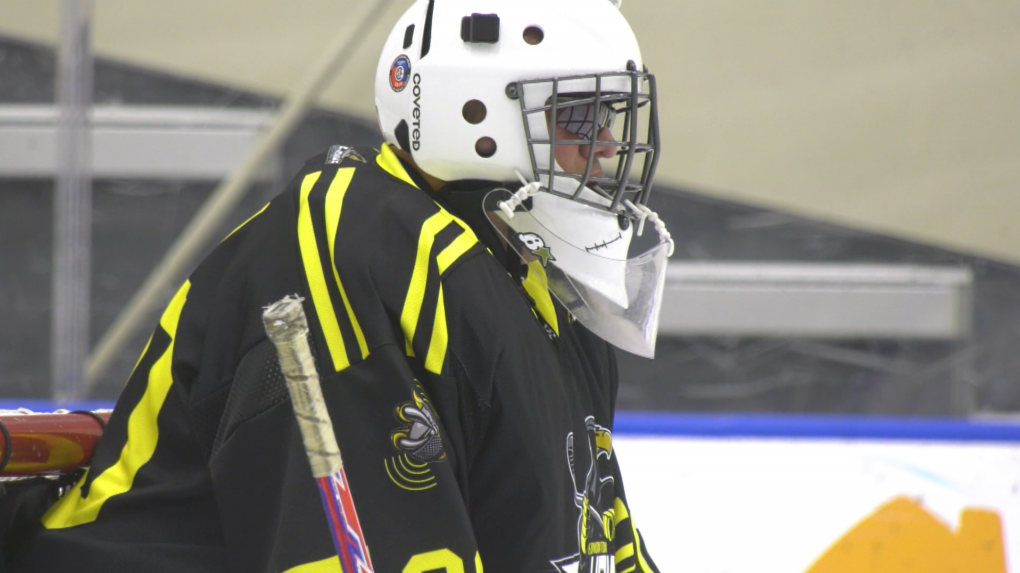 Nelson Rego, a blind goalie for the Edmonton SeeHawks.

To ensure he’s centred in the net he’ll tap his stick on the right side and his glove off the left, he explained.

“As long as I don’t drift far from the net, then I know where I’m at.”

According to Rego, his hearing is “tuned” and that’s how he gauges his play strategy.

“I think he’s just got spidey senses,” Hunter smiled. “The rest of it is all the hockey gods speaking to him.”

The game came down to one goal, 9-8, and according to Hunter, Rego held his own throughout the night.

“I came to watch obviously. I am screaming left, right, butterfly, centre.”

“He played just like any other normal person would in a league game,” he said.

“They made no accommodations for me,” Rego added. “It was just like being one of the guys on the team and that whole comradery thing that you get with a team that’s the thing that I really love the most.”

Rego said playing in that game was a huge moment for him as it brought awareness to blind hockey.

“Anything you set your mind to regardless of the obstacles, it can be done.”

Despite having enough doses for all, just 35 per cent of Canadians boosted

Canada has enough supply of COVID-19 vaccines to offer booster doses to all who are eligible, though so far just 35 per cent of Canadians have received their third shot, according to the federal health minister.

Prime Minister Justin Trudeau is once again condemning mounting aggression from Russia against Ukraine, indicating that Canada fears the situation could dissolve into armed conflict.

Canadian fashion mogul Peter Nygard has been denied bail and will be detained in Toronto as he awaits trial.

Study suggests 'nocebo effect,' not jabs, could be behind two-thirds of mild COVID-19 vaccine reactions

A new study involving a systematic review of COVID-19 vaccine trials suggests that the negative version of the placebo effect may be behind mild COVID-19 vaccine side-effects like headache and fatigue, and not the vaccines themselves.

Canadian airlines say flights to the U.S. remain unaffected by the rollout of new 5G wireless technology. Several international airlines cancelled flights to the United States this week over concerns that 5G mobile phone service could interfere with aircraft technology.