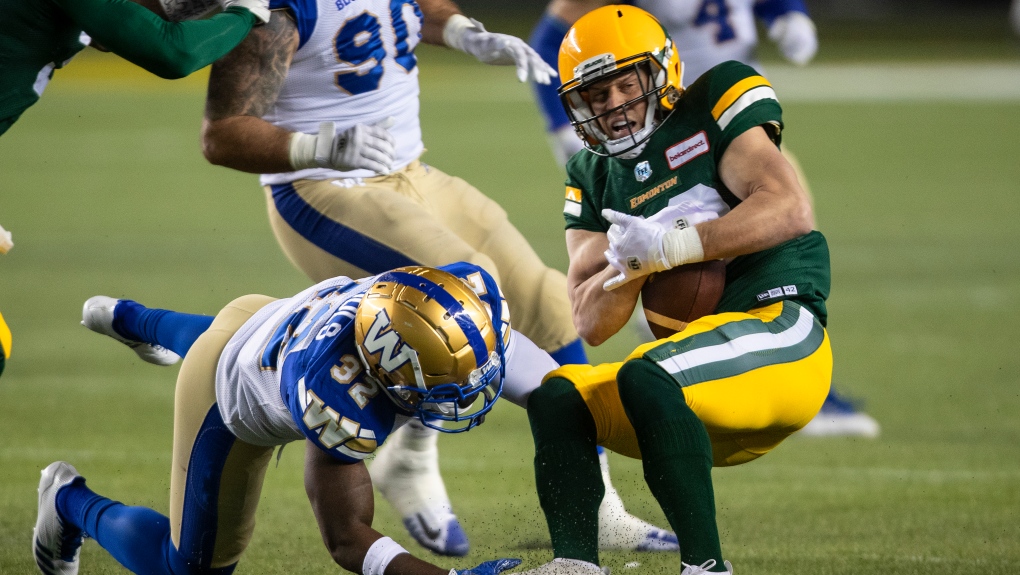 The Blue Bombers (9-1) captured their seventh straight victory and improved to 7-0 within the West Division.

This marks the fifth straight season that Winnipeg, the defending Grey Cup champion, has made the playoffs.

“You think back to 2019 and that feeling of just going to the playoffs and now to clinch it at this point in the season, it feels good,” said Winnipeg receiver Rasheed Bailey, who hauled in Collaros's second TD pass in the fourth quarter. “But we are not satisfied.

“We are going to keep getting better and learn from our mistakes and keep winning.”

Edmonton (2-7) suffered its fifth straight loss and dropped to 0-5 at home this season.

“Guys are still wanting to play and ready to go and wanting to win every game,” said Elks quarterback Taylor Cornelius. “It is a little unfortunate we didn't come away with this one, but that's the way it goes sometimes.”

Edmonton's defence forced a safety at 9:31 of the first quarter, then came up big five minutes later as Trumaine Washington intercepted Collaros in the end zone. The Bombers closed out the opening quarter with a 37-yard Ali Mourtada field goal.

The Elks responded with Sean Whyte's 34-yard field goal at 11:22 of the second.

Winnipeg took the lead with three minutes left in the first half as a 47-yard completion to Kenny Lawler set up Collaros's five-yard TD strike to Andrew Harris. But Harris appeared to suffer an injury to his right knee and did not return as Brady Oliveira finished up with 105 yards rushing on 16 carries.

Mourtada converted from 27 and a career-high 43 yards to start the third. Edmonton tied it 16-16 on Cornelius's 11-yard TD toss to Shai Ross. Backup quarterback Dakota Prukop added the two-point convert.

Rookie Cornelius got the start as incumbent Trevor Harris was a healthy scratch. Cornelius finished 17-of-29 passing for 187 yards with a TD while rushing four times for 19 yards.

Moments after Elks defender Aaron Grymes couldn't hang on to an easy interception opportunity, Collaros hit Bailey on a 48-yard completion before finding him on a five-yard scoring strike six minutes into the fourth.

“You've got to love Zach,” said Winnipeg head coach Mike O'Shea. “Grymes drops that ball and he comes right back and gets Bailey.

“He is just unfazed and stands in there and delivers. It's fantastic.”

Mourtada cemented the win with a 23-yard field goal with 50 seconds remaining.

Winnipeg hosts the B.C. Lions next Saturday while Edmonton has a bye week before returning home against the Hamilton Tiger-Cats on Oct. 29.

This report by The Canadian Press was first published Oct. 15, 2021.