Bright fight: Can anything be done about blinding headlights? 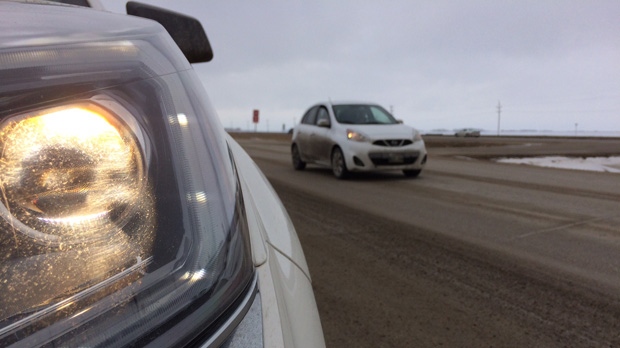 It’s happened to so many drivers on Edmonton roads.

It’s late, you pull up to a stop sign or traffic light and suddenly, you're dazed as your mirrors reflect bright, blueish lights that flood your field of vision.

That’s exactly what happened to one Edmontonian who posted a short video to Reddit last week of a truck’s blinding low beams shining into his car.

It set off a wave of comments–162, to be exact–from drivers bemoaning similar run-ins on the road.

Some argued that the lights are a safety hazard

“It’s probably the factory lights,” wrote one Redditor. “Trucks sit higher, there’s nothing you can do about it. I adjusted my beams down a tiny bit more in mine, but I still get people flashing me or straight up harassing me about my lights.”

“Many of the lights that people feel are too bright are new technologies (high-intensity discharge, xenon, LED) and are approved by the manufacturer as meeting these standards,” Alberta Transportation said in a statement.

So while blueish LED lights might appear too bright, they are within the acceptable range of brightness laid out in the law.

Modified lights and light bars are a different story.

LED light bars are a common example, the ministry said, and they cannot be used on highways.

“Alberta Transportation is not aware of any of these light bars meeting the standards to be used as on-highway driving lights,” it said. “This type of light can only be used when the vehicle is NOT in motion.”

Similarly, on-road lights cannot be tinted. The act states that light from a headlamp must be white while lenses and bulbs must be clear and untinted.

In the Reddit thread, there was a debate over what can be done about headlights that may be breaking the rules.

Low beam headlights must “reveal a person or another vehicle that is at least 30 metres ahead,” according to Alberta regulations, but there are no regulations that govern how high they can be pointed.

“The only regulation is that it has to illuminate so far down the road,” said Bates.

Some frustrated drivers may be encountering vehicles that were lifted and did not have their lights re-angled.

“Most lifts I’m sure, or shops that would do that, would readjust the headlamps if the vehicle’s being raised six inches,” Bates said.

There are fines associated for people who keep their high beams on ($87) or drivers whose headlights don’t shine at least 30 metres ahead ($78).

But for drivers annoyed by regular headlights blinding them on the roads, Bates said it’s an annoyance that many of us must put up with.

That said, anyone who feels a vehicle’s headlights are non-regulation can report it to the EPS non-emergency line, though Bates admitted police are “so swamped” with traffic plates they likely won’t have time to investigate.

Alberta Transportation said it receives about 50 complaints regarding bright lights per year.