Bringing a community together while keeping them physically distanced

A table that a convenience store in Spruce Grove put up to keep employees and customers physically distanced during the pandemic has become a symbol of community.

When the pandemic began, many stores began putting up Plexiglas screens to help keep people safe.

At Century Convenience in Spruce Grove, they wanted to do something different as the screens felt like they were shutting the customers out, according to the co-owner. Instead, one of the owners of the store and a customer built a table to put in front of the check-out counter.

“I thought maybe people would get mad because of the distance and everything… but everyone’s loved it so much and they don’t want us moving from here,” said Jaskiran Kaleka, the co-owner of Century Convenience.

“I went and got paint it to kind of match the counter but then people came in and started asking, ‘Can I sign it?’”

The table is covered with names and notes from customers, some from as far away as B.C. 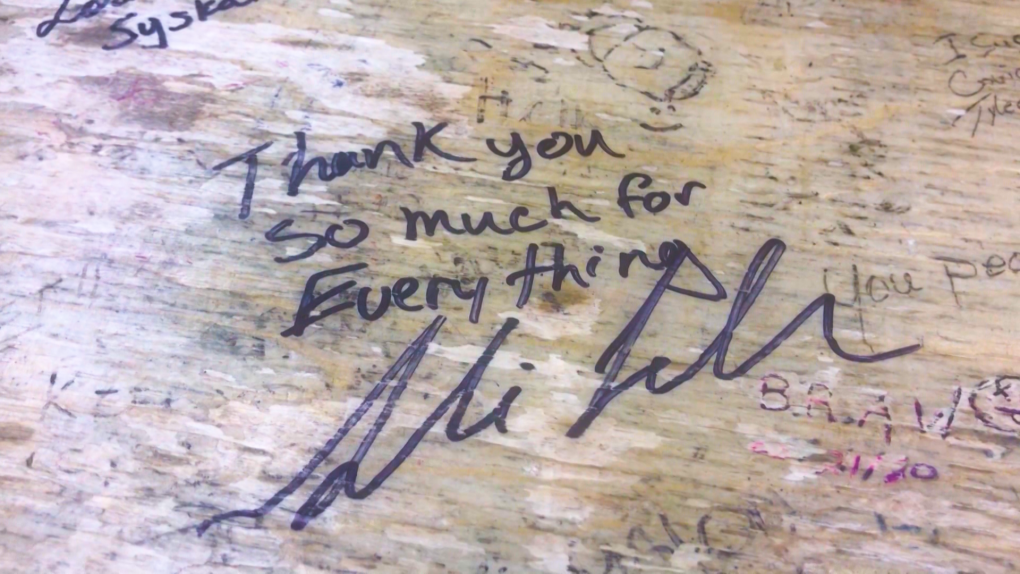 “I’m so thankful for the people in Spruce Grove here, I can’t thank them enough, they’re really beautiful people,” said Kaleka. “They’ve helped us through the pandemic so much, we didn’t even think that we’d be still keeping our door open.”

Once the pandemic is over, Kaleka plans to put the tabletop turned keepsake on display on the wall.

Monkeypox in Canada: Act now to stop it, expert urges, before it's too late

With 26 cases of monkeypox now confirmed in Canada, health officials warn that number will likely grow in the coming days and weeks. However, one expert says the outbreak can be stopped if the country works quickly to get it under control.

Canada's highest court has ruled that Alexandre Bissonnette, who murdered six people at the Quebec City mosque in 2017, will be eligible for parole after 25 years.

The gunman who slaughtered 19 children and two teachers inside a Texas elementary school was in the building for more than an hour before he was killed by law enforcement officers, authorities say.

Johnny Depp's lawyers ask jury to give actor 'his life back'

Johnny Depp's lawyers asked a jury Friday 'to give Mr. Depp his life back' by finding that his ex-wife, Amber Heard, committed libel.

Ancient volcanoes may have created a rare resource for lunar explorers

Ancient volcanic eruptions on the moon could provide an unexpected resource for future lunar explorers: water.

The National Rifle Association begins its annual convention in Houston on Friday, and leaders of the powerful gun-rights lobbying group are gearing up to "reflect on" -- and deflect any blame for -- the deadly shooting earlier this week of 19 children and two teachers at an elementary school in Uvalde, Texas.