The owner of an Edmonton restaurant is looking for answers after a stolen car damaged her patio last month.

Katy Ingraham told the Edmonton Police Commission on Thursday that when she arrived at Fleisch Delikatessen on Aug. 18, she found significant damage to the patio in front of the restaurant with no explanation for what had caused it. 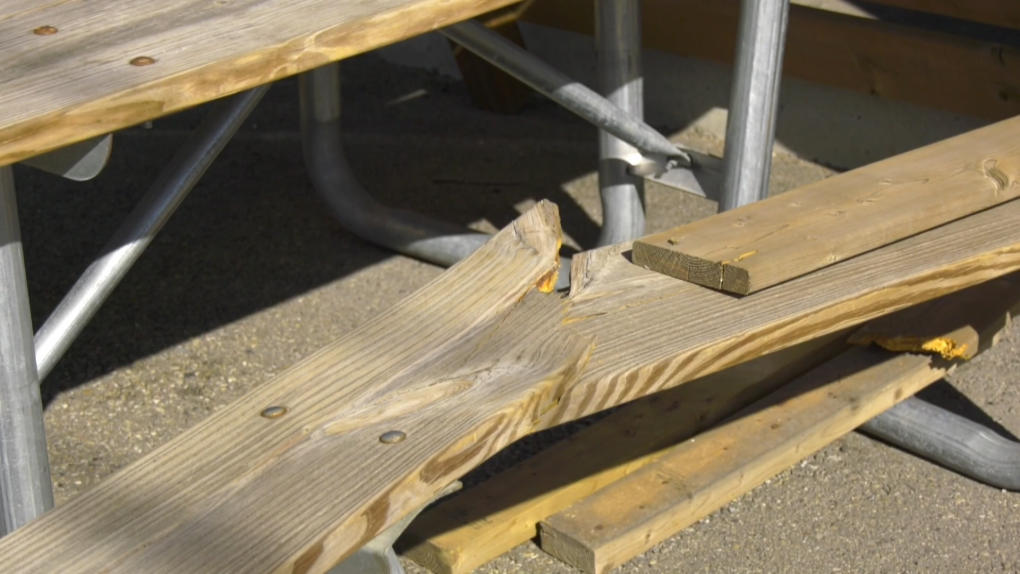 A police incident outside Fleisch Delikatessen in Edmonton in August caused damage to the business.

“I called the police because I thought, ‘Oh, this is probably an impaired hit-and-run,’” she said.

“The officer responded and he agreed with me. He said, ‘Yeah, I think that probably is an impaired hit-and-run. I’m going to drive around the neighbourhood here just to see if there’s any other damage.’”

However, when Ingraham saw video from the night before, she realized there had been a police incident in front of the business involving multiple police vehicles.

Edmonton police say officers observed a vehicle speeding in the area of 118 Avenue and 66 Street on Aug 17.

The vehicle reportedly had a near miss with an EMS unit.

Police say they attempted to stop the vehicle, but the driver fled the scene. They did not pursue the vehicle.

Air 1 located the vehicle and began to follow it.

The driver reached speeds of 190 kilometres per hour on Yellowhead Trail before leaving the city and entering Strathcona County.

Police deployed a spike belt, which failed to stop the vehicle, and the driver headed back into Edmonton.

Police say an EPS vehicle used a "direct contact maneuver" to stop the vehicle in the area of 106 Avenue and 82 Street, in front of Fleisch Delikatessen.

The 24-year-old man driving the vehicle was taken into custody without incident.

Investigators have determined that the vehicle was stolen, and the man has been charged with criminal flight, dangerous operation of a motor vehicle, possession of stolen property over $5,000, operating a vehicle while prohibited, and two counts of failure to comply.

A gun was also found and firearms charges are pending.

Ingraham is now demanding answers about why police never followed up with her about the incident.

“Complete waste of resources by having that other officer come out without even having a note on the address that that’s what had occurred here that night,” she told the police commission.

“We have videos, we know what’s transpired.”

A spokesperson for the Edmonton Police Service says it’s customary for responding officers to reach out to property owners or leave behind contact information.

“In this case, a miscommunication among responding officers resulted in a delay in contacting the business,” EPS spokesperson Cheryl Voordenhout said in a written statement. “The EPS extends its sincerest apologies for any inconvenience this delay caused and can confirm that officers have since connected with the business owner.”

Voordenhout says a form has also been submitted to the City of Edmonton Insurance and Claims Management Section.