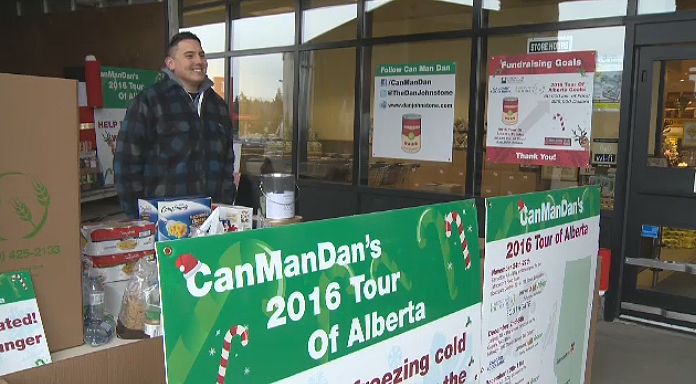 Edmonton anti-poverty activist Dan Johnstone – better known as Can Man Dan – camped out for four days straight this weekend to collect food and donations for the Edmonton Food Bank.

Johnstone kicked off the Can Man Dan 2016 Tour of Alberta last Thursday at the Southgate Centre’s Safeway supermarket, and he has been there since.

Can Man Dan estimates he has collected between 15,000 to 20,000 pounds of food. But while he’s pleased with the numbers, Johnstone says it has been a difficult year.

“We are getting a lot of donations,” he said. “People are coming down in droves, but it has been slower than most years, and I knew that going in. The economy is in tough shape, and I’m hearing a lot of stories from people that are actually using the foodbank for the first time.”

Johnstone is headed to Calgary and Lethbridge next, and he will camp out in Edmonton two more times before Christmas.

To donate to Can Man Dan's fundraisers, click here.