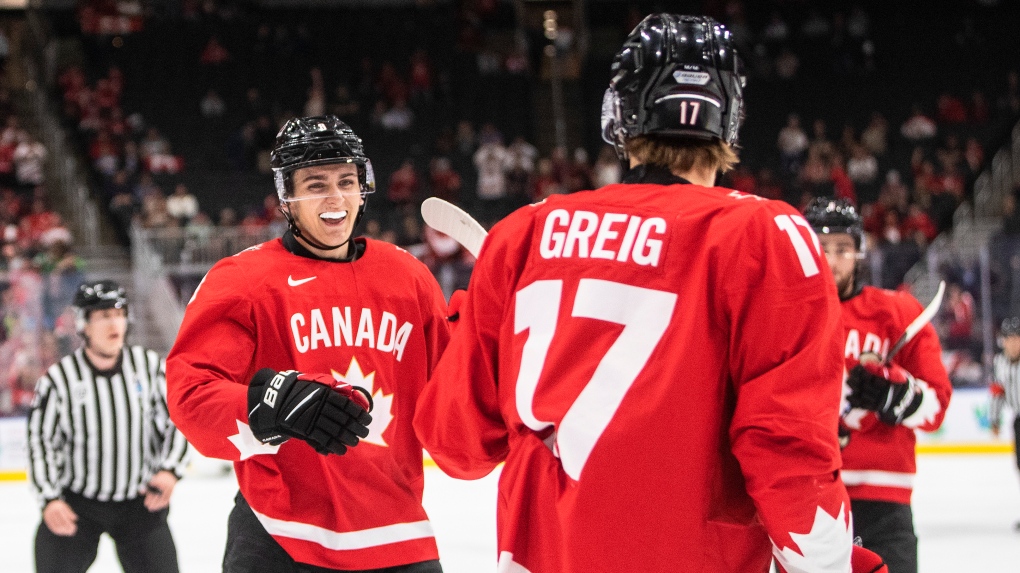 Kent Johnson has been working for years on a move that stuns goalies and hockey fans alike.

On Saturday, he executed it in a big way, scoring a highlight-reel-worthy goal that helped Canada to a 5-1 win over Czechia at the world junior hockey championship.

Johnson put away the dazzling game winner 19 minutes into the first period, scooping the puck on to his stick blade behind the net, picking it up as he glided forward and swirling it in over the Czech goalie's shoulder for an elusive “Michigan” goal.

The move - also known as a lacrosse goal - is something the Columbus Blue Jackets prospect has been honing for about six years.

“I've been practising that move since I was like, 14, and doing it,” he said. “Now it's just something that's kind of in the tool box.”

Still, pulling it out to give the Canadians a 2-1 lead - one they never relinquished - was exciting.

“It's a big goal, a really good one,” said Johnson, who added an assist in the third period. “I think it's the period I was having, too. I think I would have been pretty pumped for it to go off my skate, too.”

The play drew wild cheers from the crowd of 5,135 at Rogers Place. On the ice, Johnson's linemate Logan Stankoven held his gloved hands above his head and uttered “Oh my God!”

“That was probably one of the nicest Michigans I've seen, honestly,” said Canada's captain, Mason McTavish. “He got it up so fast and at the end of the first period, the ice isn't that great then. So that was something special to watch. I'll definitely be watching that over and over again.”

McTavish scored twice for Canada (3-0-0) on Saturday, while Ridly Greig and Tyson Foerster each found the back of the net. Jack Thompson, Ronan Seeley and Stankoven each contributed a pair of assists.

Czechia (1-1-1) opened the scoring with a short-handed goal early in the first period.

Jaroslav Chmelar was sent to the box after running fellow New York Rangers prospect Brennan Othmann into the boards from behind and leaving the Canadian with a bloody nose.

The play was reviewed and Chmelar was ejected with a game misconduct. His team was left to kill a five-minute major penalty.

Rysavy gave the Czech's some breathing room, putting a shot up under the crossbar 5:10 into the game. The puck bounced out of the net and the play continued, but a video review moments later showed the puck had crossed the goal line.

The way Canada rallied bodes well for the rest of the tournament, said Othmann.

“It's just a little bit of adversity. And that's OK in these games,” he said. “I think that builds more character for the important games, elimination games. And it just shows that we're resilient. It doesn't matter who we're playing, we're going to keep going.”

It was a busy night in net for Czech goalie Tomas Suchanek, who stopped 52 of 57 shots.

McTavish was first to beat the netminder, putting away the equalizer 16:44 into the opening frame by deflecting in Thompson's long blast through traffic.

Seconds earlier, Suchanek made an eye-popping stop to preserve his team's lead. Stationed at the side of the net, Johnson got a quick shot off on the out-of-position netminder but Suchanek slid over just in time to make a diving glove save.

“I was a little bit lucky,” the Czech goalie admitted. “The puck went into the slot and I saw he was going to pass it across and I just put my glove out and he just shot it in my glove. I was like `Oh my god, what just happened?' I watched the replay and it was pretty fun. I just said to myself `Good job' and I kept going.”

Canada's head coach Dave Cameron said he was “nervous” early in the game about how well Suchanek was playing.

“This tournament, now as the games get better and the competition gets tougher, you have to stick with it,” he said. “ (Suchanek) was really good and we stuck with it and found a way.”

At the other end of the ice, Dylan Garand made 22 saves to collect his second win of the tournament for the Canadians.

Czechia's Gabriel Szturc was called for roughing and five seconds into the man advantage, Greig tipped in Seeley's shot for his second goal of the tournament.

Canada was 1 for 3 on the power play Saturday while Czechia went 0 for 2.

Teen phenom Connor Bedard set up Canada's fourth goal of the night, slicing a crisp pass to McTavish, who was alone at the top of the slot. He stickhandled his way in and put a shot through the goalie's legs for his second goal of the game 11:05 into the second.

Foerster sealed the score 7:39 into the third period, collecting a pass from Johnson in the middle of the slot, winding up and blasting a massive shot past Suchanek to give the Canadians a 5-1 advantage.

Earlier on Saturday, the reigning champion Americans (3-0-0) remained undefeated with a lopsided 7-0 victory over Austria (0-3-0).

Austrian goalie Leon Sommer stopped 49 of the 56 shots he faced.

“I love those kind of games,” he said with a smile. “Lots of shots.”

Saturday's workload wasn't the largest Sommer has shouldered in world juniors action - he faced 64 shots in a 11-2 loss to Canada before COVID-19 scrubbed the original 2022 tournament in December.

“I guess I get the tough ones,” the goalie said. “But I love those.”

Canada will wrap up round robin play against Finland (2-0-0) on Monday.

The preliminary round continues through Monday, with the quarterfinals set for Wednesday. The semifinals are scheduled for Friday and the medal games will be played next Saturday.

NOTES: McTavish leads the tournament with 10 points (six goals, four assists). â€¦ Canada has outscored its opponents 21-4 across its first three games of the tournament. â€¦ Both sides were coming off a rest day after Canada routed Slovakia 11-1 on Thursday while the Czechs fell 4-3 in a shootout to Finland the same day.

This report by The Canadian Press was first published Aug. 13, 2022.

Over 280,000 Maritimers still without power in Fiona's wake

Strong winds and heavy rainfall from Fiona have left over 280,000 Maritimers still without power, as of 11 p.m. local time Sunday.