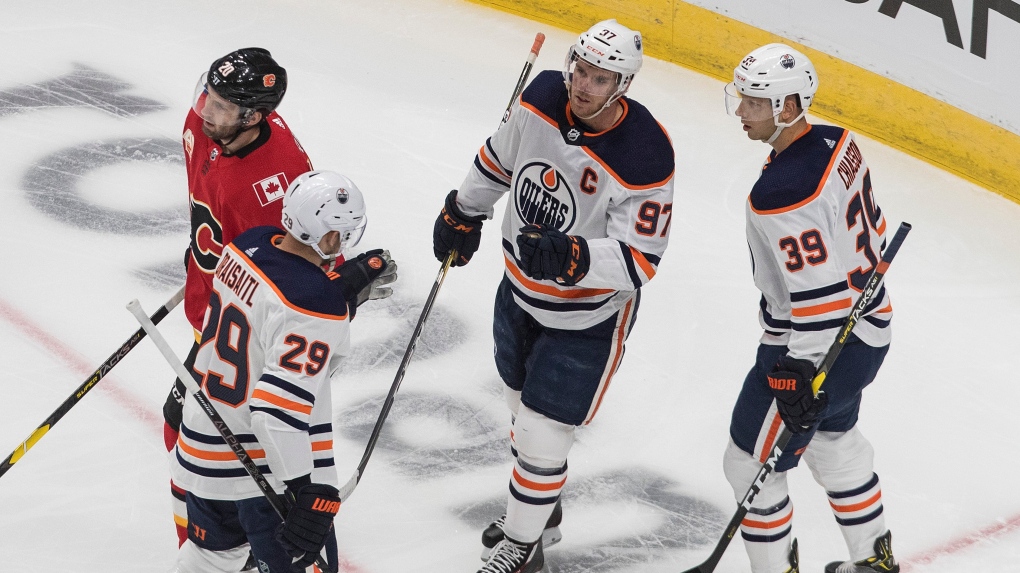 EDMONTON -- As the summer heat shimmers off the pavement and stationary cars double as sweltering four-door Dutch ovens, Canada's favourite winter pastime is officially back.

The question is whether fans, finally able to enjoy the outdoors in this year of isolation, masks, and misery, will tune in to watch computer enhanced hockey beamed in from empty hub-bubbled arenas during the COVID-19 pandemic.

Clay Imoo, a Vancouver-based Canucks superfan, says any time is a good time for hockey.

“It's a bit strange seeing (the games) on TV, admittedly, at the end of July, early August, but as a season-ticket holder for the past 10 years I'm absolutely thrilled,” Imoo, 46, said Friday in an interview.

“It's needed right now. There's a lot of crazy stuff going on. There's other priorities in the world, for sure, but I think it's also a nice way to get some normalcy back.”

When Vancouver faces off against the Minnesota Wild on Sunday in Edmonton, he plans to be home watching with his family, wearing his favourite team jersey (a retro black, red and yellow version with the swooshy hockey skate logo and Quinn Hughes' number 43 on the back).

Six Canadian teams are in the hunt for the Stanley Cup: the Toronto Maple Leafs and Montreal Canadiens are playing in the Eastern Conference bubble in Toronto while the Edmonton Oilers, Calgary Flames, Winnipeg Jets and Canucks are isolating in safe zones around Rogers Place in Edmonton's downtown.

Calgary is playing Winnipeg, guaranteeing at least one Canadian team will be in the sweet-16 round, which is the start of the traditional playoffs.

No fans are allowed in the arenas. Tarps drape the seats in the lower bowls. Massive video screens hang from the ceilings along with a camera affixed to the end of a gyrating, swooping, boom to deliver funky angled shots of the action.

Fans will see an enhanced experience, including canned cheers and applause when the “home” team scores.

Canada has been socially distanced from Stanley's mug for close to a generation, with the Montreal Canadiens the last team to hoist the championship trophy in 1993. But regardless of watching to see if Canada can regain the cup, the question remains: who the heck wants to watch hockey on TV in August?

Of the 518, about 72 reported they were jazzed or very jazzed to watch bubble hockey while the rest said they can take it or leave it or don't care.

Sportsnet says 4.3 million Canadians caught some part of Tuesday's exhibition doubleheader, featuring a Maple Leafs-Canadiens game in Toronto, and the Oilers against the Calgary Flames in Edmonton. The network says they were the most watched exhibition games in Sportsnet history.

“You've got about a quarter of people who are very excited for this,” said Korzinski in an interview.

“That group is really engaged and ready to rock.”

Age wise, the poll suggests younger fans are more engaged in this unusual summer format than those 55 years or older. Of the 55-plus set, 36 per cent said they don't care to watch shinny in the dead of summer. (Hey you millionaire hockey kids, get off my lawn.)

Korzinski said the results come with all kinds of caveats.

If the Leafs get knocked out in the elimination round by the Columbus Blue Jackets, for example, that clicking sound you hear could be TV sets shutting off all across central Canada.

But maybe the Leafs lose and the Connor McDavid-Leon Draisaitl Edmonton Oilers scoring machine goes on a deep playoff run and captures the national imagination. Click. The sets are back on.

The other factor, Korzinski said, is while hockey in the August heat may not be ideal, exciting playoff matchups in September as the leaves fall and the nights get chilly could be just what Canada needs.

“I think you could see a lot of momentum for this tournament as it goes along,” he said.

The NHL acknowledges it's in uncharted territory by running a five-round tournament while dealing with the COVID-19 pandemic. The league suspended play in mid-March as the regular season was winding down.

The Stanley Cup final, set for Edmonton, won't even begin until late September.

The league is being super-careful to ensure COVID doesn't breach the hub-bubbles.

Media members covering the games get regular temperature checks and sit, masked up and isolated, high and alone in the rinks. Post game in Edmonton, they walk down the concourse to curtained-off areas where they can ask questions of players appearing on a Zoom screen. Coffee and water are free. Hot dogs are $6.

But it's not as if hockey in the heat is unusual.

The NHL has, ironically, gradually conditioned fans for this over the decades by extending this traditional winter sport longer and longer into the late spring and early summer.

Also, some of Canada's greatest hockey memories have come when the sun is still high in the sky.

In September 1972, Paul Henderson scored the greatest goal in Canadian hockey history (an incontestable fact; don't â†• me) when Team Canada beat the Soviet Union in the final game of their Summit Series.

In September 1987, Wayne Gretzky and Mario Lemieux worked a give and go for the ages to edge the Soviets in the Canada Cup final.

While the opening weekend will answer some questions, others linger.

How will this affect Toronto fans planning the Cup parade route as soon as the Leafs win their first playoff game?

What will the cup celebration look like? How surreal will if all players spray each other with champagne on Zoom when the cup is won?

How will this affect the game long-term and how fans interact with it?

Change is inevitable, said Korzinski, as we all try to imagine a future where it's once again safe to sit cheek by jowl with 19,000 fans to yell, cheer, and be gloriously free to jostle for T-shirts cannon-launched at us from below by fuzzy-headed mascots.

“This might be a bit of a new normal. It will be interesting to see how the NHL leverages it and how this initial experiment goes,” he said.

If nothing else, a Canadian win would be ironic and poetic punctuation to a Kafkaesque year of COVID surrealism: only after we closed the entire U.S. border was Lord Stanley finally able to come home.

This report by The Canadian Press was first published July 31, 2020.