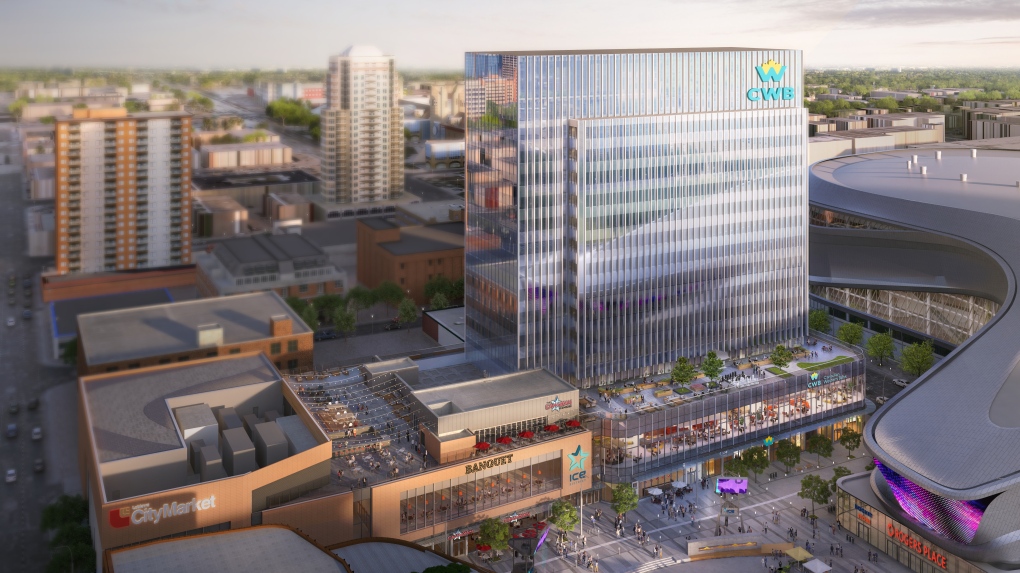 Edmonton’s ICE District has a new “anchor tenant” for its last available tower.

A release from the Oilers Entertainment Group (OEG) on Monday said Canadian Western Bank (CWB) will move its national headquarters into the tower overlooking the ICE Plaza.

“We’re proud to be part of Edmonton’s vibrant business community, and this city has been and always will be our home.”

CWB will occupy 200,000 square feet of the new tower. Fowler said that’s about 50,000 more square footage than the current building they’re in on Jasper Avenue.

The new space will offer flexibility, collaboration and preferred work styles for employees, Fowler explained. He noted the area has ample amenities including restaurants, shopping, fitness facilities, underground parking and close proximity to the LRT.

“We just thought from a talent attraction perspective for our staff that it really would be a fantastic location that would be in the centre of Edmonton and really pull people in,” he said.

According to the OEG, the tower will maintain a focus on “environmentally sustainable building standards” as well.

“We are beyond excited to welcome CWB to ICE District, the largest mixed-used sports and entertainment hub in Canada,” Tim Shipton, executive vice president of the ICE District, said.

“This tower will represent a new standard for office space, contributing to ICE District’s expansive views and stunning architecture.”

“We’ll bring 1,200 people,” Fowler added. “It's that concentration of busy people in a really vibrant area. Just contributes to the area of downtown Edmonton.” .

Construction on the tower is currently underway. It’s expected to be complete in 2025.

Fowler said CWB will likely occupy the space in January of 2026.