The RCMP's canine members showed off their skills in Stony Plain Wednesday.

Cpl. Mike Drenka and his partner, a six-year-old German Shepherd named Roy, were among the canine teams there.

Drenka said being a dog handler is a round-the-clock job.

"You can’t just sort of hang it up and go home and just go relax," Drenka said. "So much of my time off is dedicated to him."

Over the course of five years, the duo have found hundreds of suspects and missing people. Despite the demands of the job, Drenka said it's rewarding.

"I don’t see myself doing anything else in this outfit." 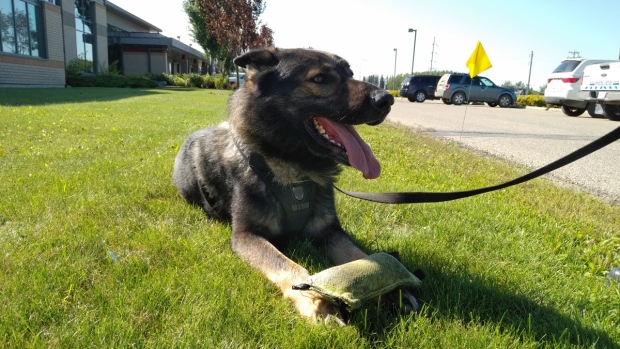 The RCMP held the demonstration to not only show what police dogs are capable of, but to put to rest what they call a stigma that the dogs are vicious.

"These dogs are screened for their temperament and they’re just the happiest, most well-adjusted animals you could ever hope for," said Sgt.Troy Raddatz, the Police Dog Services program manager with the K-Division RCMP. "Sometimes injuries are incurred through the apprehension of people but everybody is also afforded the opportunity to surrender and not be bit. You actually have to do a lot of work to get bit by a police dog in this province."

Police also showed off two new potential recruits: Madox and Lola. If they make the cut, the two would bring the number of female RCMP dogs up to four.